The pundits say it is hopeless, Hitlery has this in the bag, yet there is no evidence anywhere of all of these Hitlery voters. Anybody seen one? 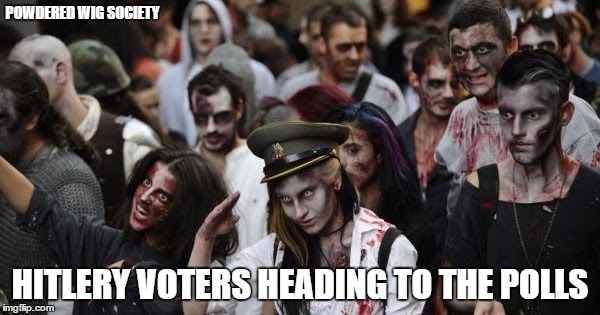 So, I wake up this morning, fire up my always reliable laptop, and what is waiting in my email but handwringing headlines from respected pundits, like Trump Is Down, But Not Out, from Pat Buchanan, who devotes the majority of his article to the myriad problems facing Hitlery and her troop of flying monkeys, yet implies that Trump can still win, but it won’t be easy.

Buchanan seems to be saying, “Yes, the Broncos are leading the Titans 84-0 in the fourth quarter, but the Broncos still have a chance. Headwarp!

Opines Mr. Buchanan, “The twin imperatives for the Trump campaign are simple ones.

They must recreate in the public mind that Hillary Clinton who 56 percent of the nation thought should have been indicted for lying in the server scandal, and who two-thirds of the nation said was dishonest or untrustworthy.

Second, Trump must convince the country, as he had almost done by Cleveland, that he is an acceptable, indeed, a preferable alternative.

While the assignment is simple, as Ronald Reagan reminded us, there may be simple answers, but there are no easy ones.”

“‘She has 348 electoral votes right now,’ Sabato, the director of the Center for Politics at the University of Virginia, told Fox News’ ‘Fox and Friends‘ program. ‘Donald Trump has 190,'” then adds, “The projection site also counts Clinton as having 273 electoral votes from safe states and likely Democratic states, which puts her over the 270-vote threshold needed to win the presidency.”

Translation: It is hopeless. Jump out the window NOW!

The burning question is who are these millions of Clinton voters that I can find no evidence of? Anyone know? I understand the graveyard registration schtick, but really, where are the living, breathing, walking, talking Hitlery supporters? They are certainly not showing up at the high school gyms where the Wicked Witch of Benghazi routinely packs in a couple hundred high schoolers who are the tragic victims of forced assembly (we all remember those mandatory high school assemblies that bored us to tears).

I refer you to the first half of August’s schedule for the respective candidates…. Hitlery is drunk again. Practically no one is showing up at Monica Lewinsky’s ex-boyfriend’s wife’s parties. On the other hand tens of thousands of Trump supporters are showing up for colossal rallies that look and sound more like rock concerts, and thousands more are turned away for lack of space.

So, since walking, talking Hitlery supporters appear to be between leprechauns and unicorns on the rarity scale, what the hell are these guys talking about? Where are they getting the overwhelming “Hitlery crushing Trump” numbers? What polling are they using? Are their computer models taking into account objective public opinion polls that show The Donald leading Hitlery by a Texas mile, like this one from ABC? Or this one, a completely objective poll done by college graduate students, polling 50,000 registered voters, 33% Republican, 33% Democrat, 34% independent. Link…. College Poll. There are many other polls greatly favoring Donald Trump.

Please, if you see a Hitlery supporter, take a picture and send it to us. And by all means, leave your thoughts in the Comments section below as to where you think these Hitlery supporters are hiding. As Jerry Seinfeld inquired, “Who aaaaaaaaare these people!?”