Another honest presidential poll to counter the bullsh!t the mainstream media is trying to shove down our throats

Many of us in the “alternative media” (bloggers, or “internet publishers,” as we call ourselves in the company of others after a few beers) have been reporting on the blatantly obvious and shamefully erroneous polling from the major polling organizations that are showing Hitlery leading Donald Trump by as much as 15 percentage points in their escape-from-reality presidential election public opinion polls.

Payola is the only reason I can imagine for this travesty. The Republicans have commendably not stooped to anything so unethical as manipulating public opinion polling to engineer the outcome of an election.

The blue slime from the other side of the aisle, however, has no such regard for ethics or morals or law or anything other than power and control and money, resources they have not hesitated to spend to screw the American people to the wall for more of the same.

The good news is that the major polling organizations are not the only game in town any more. Keep a keen eye on the alternative media, sites such as Powdered Wig, and you will find many honest and very scientifically conducted polls that are far superior to the tiny sampling polls the major pollsters put out.

Don’t expect to find the truth in the mainstream media. It simply ain’t there! Partisan reporting, driven by filthy, leftist money is all you will find. They will not hesitate to publish a lie, knowing it is a lie, and sell it as the truth.

Pat Caddell, a respected, longtime Democratic pollster and political consultant had this to say after reviewing the differing methodologies that Reuters used to interpret its polling data: “This comes as close as I have ever seen to cooking the results.  “I suppose you can get away with it in polling because there are no laws. But, if this was accounting, they would put them in jail.”

Welcome to the other side, the blogosphere. The fact that you are here puts you in a growing class of enlightened Americans.

Case in point: A group of graduate students, angered by the obviously erroneous polling the liberal mainstream media is driving, decided to conduct a poll of their own. A typical major media poll may survey a few hundred respondents. These kids surveyed 50,000. When it comes to accuracy in polling, sampling size matters. And in an effort to maintain complete objectivity they polled 33% registered Democrats, 33% registered Republicans, and 34% registered independents. You can’t get any more objective than that.

The results of their poll are stunning. The Donald destroyed the Wicked Witch of Benghazi 67% to 19%. Now you know the truth! 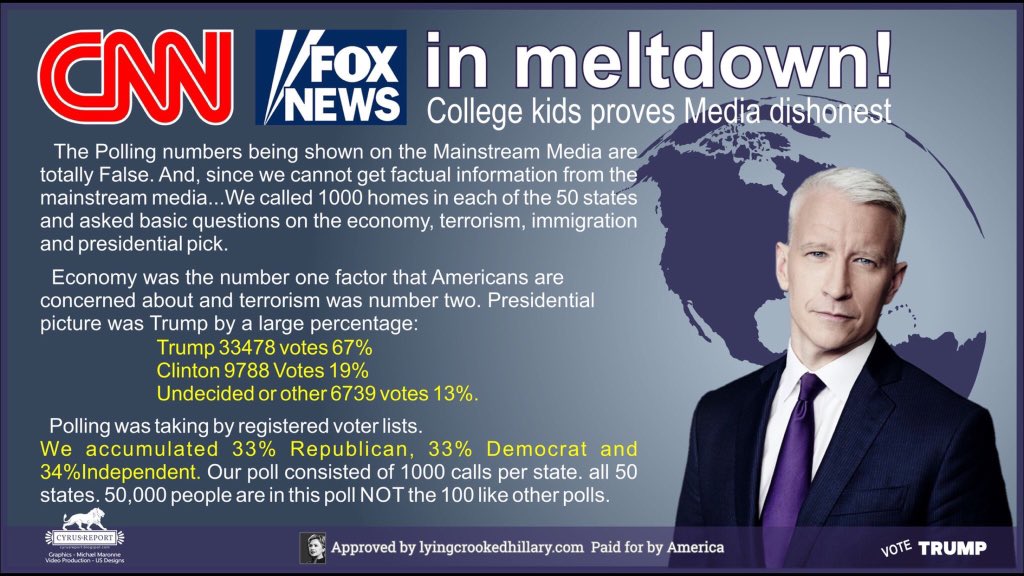 “We’ve been telling you the difference between a media poll and an internal poll.  Media polls are driven by the desire to achieve a certain outcome.  That is why you think Hillary is leading Trump by 10 points.  If you were paying attention, one of these polls had Hillary up by 15 points before the GOP convention.  After the convention, Trump was up 15 points, a 30% jump!  Statistically impossible.  After the democrat convention, Hillary was up 10 points, a 25% swing.  Again, can’t happen.  The media is jerking our chain.  DO NOT believe them.  The only polls that can be believed are internal polls that are rarely made public.  While the poll below is not an internal poll, it was done in a most interesting manner – with no perceived bias.  And it is YUGE!”

“And by the way, it nearly mirrors what internal polls are showing.  By any accurate measure, Hillary is NOT leading Trump in the minds of the voters.”

‘We have just completed our own poll since we cannot get factual information from the mainstream media!! We called 1000 homes in each of the 50 states and asked basic questions on the economy, terrorism, immigration and presidential pick.”

“Economy was the number one factor that Americans are concerned about and terrorism was number two.
Presidential pick was Trump by a large percentage.
Trump 33478 votes 67%
Clinton 9788 Votes 19%
Undecided or other 6739 votes 13%”

“My friends and I are all Graduate students from all walks of life.  We meet to discuss stuff… 13 people who like and have served in the Military. It took us most of two weeks to be sure our calls were to all people and not just one party or another.  We called Americans.. our poll is by taking registered voter lists and we accumulated 33% repub, 33% dems and 34% ind.. our poll consisted of 1000 calls per state. all 50 states. 50,000 people are in this poll not the 100 like other polls.”

Please share this to spread the truth that we are being hustled and manipulated by nefarious forces on the left. Ain’t happening this time, liberal trash. You have been outed. Now it is just a matter of cleaning house, and we have just the guy to do it!

The New Prophets – Tell the World to Take It or Leave It
January 17th, 2021 TCP News