Voter fraud? No such thing, right? Ten Democrat counties in California had more registered voters than there were adults in the county

I consider voter fraud/election fraud America’s most pressing problem. Clearly, we have had scumbags elected due to voter fraud, and always they are Democrats.

There is a reason that the only ones screaming for no voter ID are Democrats. They couldn’t win an election without cheating.

The blue counties (see map, below) with more registered voters than there are living adults in the county are mostly along coastal and southern California. 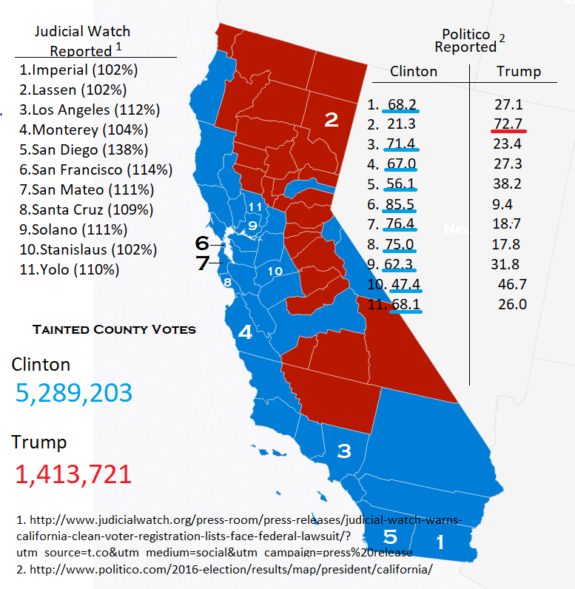 The counties include San Francisco, Los Angeles and San Diego, according to The Gateway Pundit.

Judicial Watch, a conservative watchdog organization, has sent a letter to California Secretary of State Alex Padilla on behalf of the Election Integrity Project, noting that there are 11 counties in the state with more registered voters, and alleging that the state may be out of compliance with Section 8 of the National Voter Registration Act (NVRA).
The letter reads, in part:

NVRA Section 8 requires states to conduct reasonable list maintenance so as to maintain an accurate record of eligible voters for use in conducting federal elections.1 As you may know, Congress enacted Section 8 of the NVRA to protect the integrity of the electoral process. Allowing the names of ineligible voters to remain on the voting rolls harms the integrity of the electoral process and undermines voter confidence in the legitimacy of elections.
…
As the top election official in California, it is your responsibility under federal law to coordinate California’s statewide effort to conduct a program that reasonably ensures the lists of eligible voters are accurate.

In June California Secretary of State Alex Padilla told the Trump administration the state will not cooperate with the election integrity commission because it would “only serve to legitimize the false and already debunked claims of massive voter fraud.”