More stupidity from the wacko left on the horror of free speech (of anyone but themselves) and the Muslim attack in Garland, Texas

Qasim Rashid is an attorney, author of EXTREMIST, and national spokesperson for the Ahmadiyya Muslim Community USA.

“There’s an important history behind America’s free speech laws to which the anti-Islam hate group behind the ‘Draw Muhammad Contest,’ is wholly ignorant. While the Islamophobe leading this hate group believes she’s a free speech champion, remarkably comparing herself to Rosa Parks, in reality America’s current free speech model developed as an attempt to protect — not demonize — religious and racial minorities. “U.S. law only began to protect hateful speech during the 1960s,” writes Garrett Epps. “Southern state governments were trying to criminalize the civil-rights movement for its advocacy of change. White Southerners claimed that the teachings of figures like Martin Luther King or Malcolm X were ‘hate speech’ and would produce ‘race war.'”

And you’re an attorney, Qasim? Did you skip the class on the United States Constitution at Richmond Law? Newsflash! America’s freedom of speech was not “developed” in the 1960s as a guard against southern racists. Here, let me help you out. Following is the entire text of the very first amendment to our Constitution, which is where America’s ABSOLUTE freedom of speech comes from…. 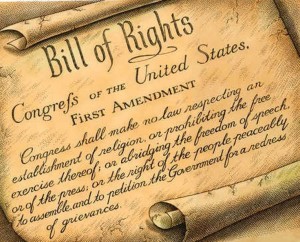 Please take special note how intentionally concise and broad the language of our founders is. One sentence, forty-five words. Concise and absolute, not narrow and specific. ALL speech is free in America, not just the speech of whites, or Baptists, or southern racists. Everyone! If we can tolerate a so-called artist exhibiting a crucifix in a jar full of his own urine and calling it the “Piss Christ,” then any cartoon should certainly be considered tame. This is not Tehran. This is America. Many Americans, myself included, do not want 7th century Islamic values shoved down our throats, and will resist it with our last breath. Get used to it! Enjoy the same freedom you advocate be prohibited from others.
A little more history, this from The ‘Lectric Law Library. Please note the date of this case is 1735, a wee bit before the “1960s.”….

The colonies’ most celebrated seditious libel prosecution was that of John Peter Zenger in 1735. Zenger, publisher of the ‘New York Weekly Journal’, had printed a series of scathing criticisms of New York’s colonial governor. Although the law was against Zenger, a jury found him not guilty — in effect, nullifying the law and expressing both the jurors’ contempt for British rule and their support for a free and unfettered press. After Zenger’s acquittal, the British authorities abandoned seditious libel prosecutions in the colonies, having concluded that such prosecutions were no longer an effective tool of repression.
take our poll - story continues below
Completing this poll grants you access to Powdered Wig Society updates free of charge. You may opt out at anytime. You also agree to this site's Privacy Policy and Terms of Use.

The stage was set for the birth of the First Amendment, which formally recognized the natural and inalienable right of Americans to think and speak freely: “Congress shall make no law…abridging the freedom of speech, or of the press; or the right of the people peaceably to assemble, and to petition the Government for a redress of grievances.”

Continued Mr. Rashid: “Courts sided with American icons like Dr. King, Malcolm X, and Rosa Parks, not because they advocated unpopular ideas of hatred or destruction — but because they faced ongoing hatred and destruction at the hands of racist white southerners. As the Southern Poverty Law Center, the Anti-Defamation League, and leading Jewish American Rabbis note, Geller represents the antithesis of the moral courage that was Rosa Parks.”
“Repeated demonization can inspire violence.” claimed Rashid. “This is a fact.”Then, quoting Rabbi Rick Jacobs: “During the Holocaust, the Nazis went beyond making us social outcasts; they systematically slaughtered our people with unspeakable cruelty. Because we know so well what it is like to be outcasts, we must never, through our deeds or words, make others into modern-day lepers. [W]hat [Geller] does, what she represents, has no place in a Jewish community that is built on tolerance and understanding.”
Really, Rabbi? Even if your people are having their heads cut off by intolerant savages for the crime of being Jewish? Do you really believe that bowing to these cockroaches, allowing them to cause the shutdown of our constitutional liberties will convince them what a swell guy Rabbi Rick is, thus sparing your head? Please tell me you don’t believe that! Perhaps you and Qasim can attend a remedial class on the United States Constitution together. You have to admit, a Jew and a Muslim attending a course on US Constitutional law together would be historical, if not hysterical.