VIDEO: A shout out to Pamela Geller! Keep the faith. We need you! Her anti-Islamization of America rally in Texas

Patriots of all stripes, this is a call to action. Stalwart patriot Pamela Geller has had her website, Atlas Shrugs, shut down. As a fellow blogger I can say without question that conservative blogs are in constant danger of being shut down. Nefarious forces, from liberal “progressives” to Islamists are continuously trying to find ways to deny free speech to conservatives.

Many thanks to Pamela for all she does for America and conservative causes. Hopefully she will be operating again soon.

Pamela has been very vocal in resisting the Islamization of America. She recently set up a protest in response to the Muslim “Follow the Prophet” rally being held in a Texas public school. Then suddenly her website went black. What a coincidence. Apparently freedom of speech, protected by our First Amendment, applies only to liberals and Muslims.

I will stand by Pamela and all American patriots and support you all however I can. In the meantime if Powdered Wig disappears you can be pretty sure what happened.

From Pamela Geller, in support of Bare Naked Islam

Hamas-tied CAIR has been calling for some time for BNI to be shut down because of comments. WordPress (the blog platform) responded by shutting down BNI in late November and then reinstating it; now it has been shut down again, and the Hamas-linked nazi group CAIR is doing a victory dance. They’re claiming credit, although details are sketchy: the BNI publisher says WordPress hasn’t given her any explanation for suspending the site, and that she has been monitoring comments closely since November 26, when the site was first shut down. This is how BNI’s publisher explained what happened in an email to me:

I allowed them to delete ALL comments prior to 11/26 and they did. After that I was very careful to delete anything that could be deemed a threat. In CAIR’s press release today they mentioned the comments from the other post all of which were deleted immediately. There were no new comments that they listed today. But….they did mention my close involvement with the All American Muslim/Lowe’s Buycott campaign. I had about a 12 or 14 different posts on that so I think the ratings dive for AAM was what made them threaten WP with a lawsuit. I am just assuming as WP didn’t say this.

That any rational freedom lover would listen to the enemies of free speech at Hamas-tied CAIR is beyond the pale. Across the web, I have seen calls for a holocaust II, killing Jews, killing conservatives, killing Blacks, etc. I have been called a neo-kikess while being libeled, smeared and defamed. And Hamas-tied CAIR itself is a libel machine.

The death threats and calls for genocide are daily. Just recently there was this comment:

xxxsampsonxxxX has made a comment on ‪Pamela Geller vs Imam on CNN Sunday:

THIS BITCH SHOULD GET SHOT. I H8 HER

The blood libel against Israel organ trafficking in Haiti was started in the notoriously anti-Jewish Huffington Post comment section. Anti-semitism is raging in the pages of the NY Times, Time magazine, LA Times, etc. Nothing was ever said or done — that’s free speech.

I condemn all calls for killing and genocide.

I don’t know what was said at Bare Naked Islam. Some of what I see I would not host or post on Atlas. But I don’t CAIR. The difference between an exchange of ideas and an exchange of blows is self-evident.

If I had a blog on wordpress, I would pull it. I would. Because it’s only a matter of time until something you say doesn’t meet with the Muslim Brotherhood guidelines.

The fundamental principle of free speech is the protection of all speech, not just speech we like. Because who decides what’s good and what’s forbidden? The Hamas-tied thugs and enemies of free speech at CAIR?

I disapprove of what you say, but I will defend to the death your right to say it — Voltaire 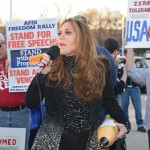 From Bob Price, Breitbart, on Pamela’s anti-“Follow the Prophet” Muslim event being held at a Garland, Texas public school, which amazingly coincides with her website being shut down

GARLAND, Texas — Pamela Geller told a crowd of nearly one thousand protestors that “we’re living in an age where evil is good, and good is evil.” Her remarks came during a free speech rally staged to protest the “Follow the Prophet” assembly underway in a Garland Independent School District convention center.

Geller encouraged the group to speak their mind but to do so in a way that brought credit to the movement. “Never give them what they’re looking for,” she explained. “They want you to say something wrong. They want you to have a bad sign. Because that becomes the front page.”

She instructed the crowd on how to best define their role. “You have a role here,” she stated. “Your role is an educator. Your message is beautiful. So please, be beautiful. Each of you are beautiful. Act beautiful and be righteous.”

“Make the cause proud,” Geller challenged the group.

Geller closed by telling the crowd that they are soldiers in the battle for America. She reminded them that each of them should be their own media organization and encouraged them to use their Facebook and Twitter accounts.

She closed by leading the group in a chorus of “God Bless America.”

Before her speech, Geller spoke with Breitbart Texas about the day’s events in Garland. “I am overwhelmed by the turnout,” Geller exclaimed. “There are thousands of people here standing in defense of free speech.”

She explained that the Muslim leadership chose to have a conference here in Garland. She said they are trying to impose restrictions on free speech like they are doing in Paris. “Thousands of Americans said ‘no way!’”

“The media can smear us and the President can stand with them,” Geller said. “We the people are not having it. If there is any proof of that, it’s today. We dwarfed them.”