Trump is right, and very brave for saying that Muslims are a danger to our society, that not all Muslim migrants are pure of heart, and our welcome mat should be pulled until we have had time to consider this progressive and politically correct Muslim immigration plan. The alternative could be lethal and disastrous. There have been many recent cases of Muslim migrants going on homicidal rampages in America, San Bernardino being the most recent. Do we really want to ignore this and continue to invite Muslims into our country by the thousands, to become leeches and lifetime welfare recipients and ultimately killing innocent Americans?

How do Americans feel about The Donald’s politically incorrect proposal to ban Muslims? His poll numbers spiked. In South Carolina Trump gained 8 points, scoring at 30% prior to his proposal, and 38% after. 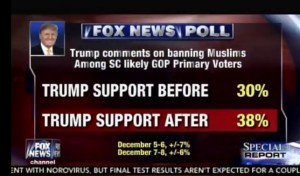 How many innocent Americans have to die at the hands of this trash before our politically correct numbnuts get it?!

F**k this walking, talking rectum! Put him in a cage, put the cage on a boat, and ship his sorry ass to his former hellhole of a country and out of whatever western nation he is currently infecting. And ban him from returning for life! Or take the short cut and put a bullet in his worthless head.