VIDEO: Colorado Trump supporters protest the GOP establishment manipulation used to steal the votes of the people in the CO primary 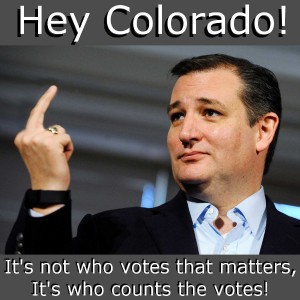 Trump-supporting Colorado GOP delegates are screaming bloody murder over the corrupt shenanigans the GOP/RNC pulled in their state primary.

Signs like “CRUZ STOLE MY VOTE!!!!” and “Colorado stole our votes for Trump” were clearly seen in this crowd of angry protesters, who actually did have their votes stolen from them by the slimy GOP/RNC machine.

The first young lady speaking in the video is a delegate. She claims that “there was a lot of weird stuff going on,” and describes a process that was “very confusing,” with “a lot of Cruz operatives there.”

Yes, ma’am. It is very confusing by design. To keep you and the other Trump supporters from having a voice. They manipulated the system for their own partisan gain, denying the people the opportunity to choose their own candidate. They are typical socialist elites who know better than you and will select a candidate in your place because you are not smart enough to do that on your own.

And if I hear one more Cruzbot or establishment wimp like Reince Pubis whine that “the Colorado Trump supporters knew the rules,” and/or “this change to the system was made a year ago,” I am going to come unglued!

Trump supporters did NOT know about this change that would prohibit the Colorado grassroots  a vote in the primary, otherwise they would have been complaining about all along. It was done in virtual secrecy in August, exactly the same time that Donald Trump became a dominant candidate.

Coincidence? I think not! The best hope for the GOP is that Donald Trump wins as a Republican and rehabilitates the party. Rehab is what this party of worn out establishment hacks truly needs.

The arrogance and corruption within the ranks of the GOP leadership is transparent in this video, showing a GOP operative and member of the RNC Rules Committee tell a network news reporter that there is really no reason to allow the people to vote at all in the primary, the party is going to make the decision who is nominated, not the people. Translation: “Elections in the United States are just a farce, designed to convince We the People that we are actually in charge of who runs our country.”