Poor CNN, the Rodney Dangerfield of cable news, getting no respect, which begs the question, “Should a lying, partisan fake news organization masquerading as a legitimate and objective news source be respected?” No!

Although I very much enjoy the temper tantrums of CNN’s Jim Acosta, berating Sarah Sanders for ignoring him while he shouts his demands to be heard over Sanders’ attempts to conduct a White House press briefing, I have to admit the schtick is getting pretty old.

But, let’s not throw all the dirt on CNN. MSNBC’s newest presidential target is sleepy Chuck Todd, all 5’2″ of him. Who needs that? Although MSNBC has gone the way of the NFL in my house (we simply don’t watch it), I understand that the safest, most effective sleep aid available today is fifteen minutes of Chuck Todd just before bedtime.

So, if Fox owns the right and MSNBC owns what little there is of the left, who is watching CNN? People in airports, fast food joints, and doctors’ waiting rooms, that’s who. Those who don’t have a remote to change the channel to Fox. If it weren’t for the captive audience, CNN would have no audience at all.

As expected of a lying, partisan fake news organization masquerading as a legitimate and objective news source, CNN’s ratings are in the toilet. The Clinton News Network routinely loses in the ratings war to such obscure viewing choices as reruns of Yogi Bear cartoons. Not kidding!

Check out the ratings for the top 25 cable news programs for the period 1/29-2/23. Fox programs dominate the list with a smattering of MSNBC here and there. CNN has a single program in the top 25, Anderson Cooper 360 squeaking in at #24, barely beating out the Joe and Mika Tongue-wrestling Spectacle. 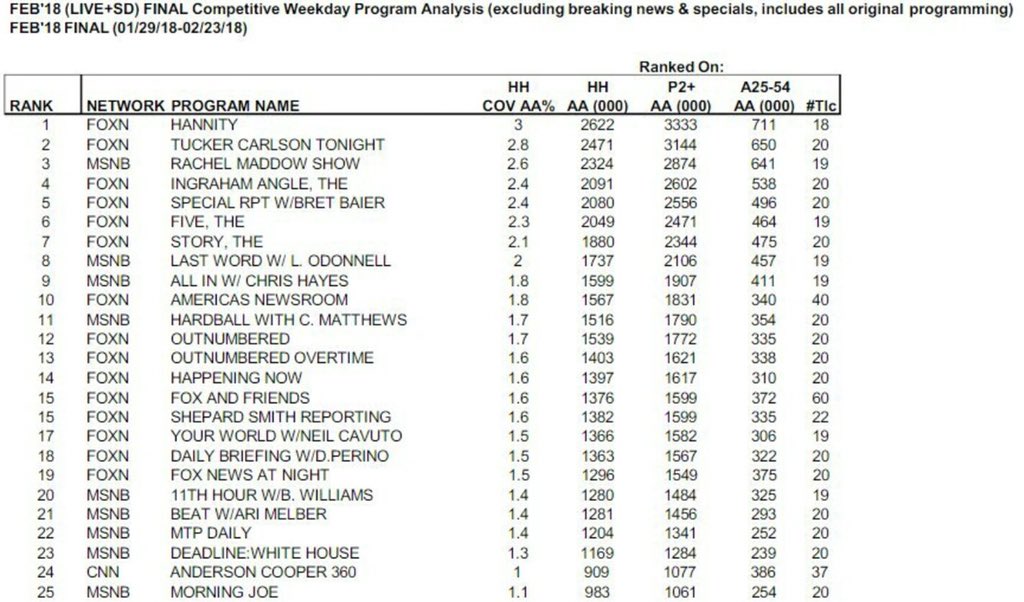 Congratulations @FoxNews: Fox has 15 of the top 20 shows with @SeanHannity and @TuckerCarlson leading the pack at 1st and 2nd respectively. CNN has become totally irrelevant, down 19% from last year with only 1 show in the Top 25 (#24th). pic.twitter.com/5IcwYEbFRR

Traffickers Abandon 5 Girls, Under Age 7 On Texas Bank of Rio Grande
May 11th, 2021 The Lid