Another public opinion poll shows Donald Trump crushing the Wicked Witch of Benghazi. For many reasons, detailed below by Viral Liberty, this poll deserves as much respect as any of the major polling organizations. In fact, in my opinion, it deserves much more.

I consider sampling size to be a yuuuuge factor in accurate polling. You can’t  poll ten people and expect to get an accurate result of a national election where 120 million votes are cast. Many of the polling organizations poll just a few hundred.

In the case of the recent Trump/Clinton polls put out by Reuters and other major polling organizations, the sampling sizes were not only small, but there appears to be a good bit of legitimacy to the charge of partisan polling, overpolling Democrats. Many claim that the Democrat Party and Clinton campaign are paying the polling organizations to produce a product that favors the Democrat presidential candidate, Hitlery Clinton.

These polling results are directly counter to apparent reality, considering respective rally audience size and social media following, all of which are clearly and always in favor of Donald Trump, and not by a narrow margin. Of 100,000 respondents polled, 64% are voting for Trump, 36% are voting for Hitlery.

Said Democrat pollster and political consultant, Pat Caddell, of the vast disparity between Reuters’ polling and alternative polling that has Trump comfortably ahead, “This comes as close as I have ever seen to cooking the results.  I suppose you can get away with it in polling because there are no laws. But, if this was accounting, they would put them in jail.” 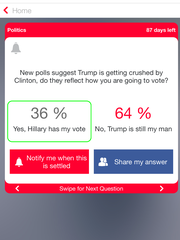 ELDER PATRIOT – There’s a strange and growing dichotomy emerging between the polls conducted by the mainstream media and those using newer and more sophisticated analytical techniques.

The most recent poll reveals Trump is trouncing Hillary by 28 points nationwideaccording to unbiased responses from 100,000 respondents.  By comparison, the average number of respondents to the last six polls cited on the Real Clear Politics website was only 2,858.

The poll uses social media through an app called Zip Question and Answer and it allows users to both ask and answer questions with instant results from a cross-section of demographics and geography.

Developer and co-founder the San Diego based company Crazy Raccoons, Ric Militi said this question was posed to users:

”New polls suggest Trump is getting crushed by Clinton. Do they reflect how you are going to vote?”

Considering the biased nature in the way the question was framed the response was shocking: 64% told Zip they would vote for Trump and only 36% responded that their choice was Clinton.

It should also be noted that social media is mostly used by younger voters who would be expected to support Mrs. Clinton indicating Trump would be even further ahead when older voters are added in.

“Douglas Rivers, a Stanford University political science professor and chief scientist for YouGov, which conducts online polls with such partners as CBS and the Economist, disagrees. ‘What do they know about these people?’ Rivers says. ‘We worry a lot about who we’re talking to.’”

‘We worry a lot about who we’re talking to.’”  No shit.  This explains why the polls conducted by the mainstream media consistently oversample registered Democrats by as much as 15% in order to get the results that satisfies their narrative that Americans are embracing the progressive agenda so strongly that they’re willing to elect the a candidate they consider totally corrupt, dishonest and untrustworthy.

One such poll conducted by mainstream media member Reuters was “re-worked” to obscure a 17-point swing towards Trump in order to bring it into line with the rest of the mainstream media’s “cooked” polls.

They arrogantly did this after they had released the poll’s true findings that showed Trump winning.  This called attention to the rampant corruption that has engulfed the old guard polling industry by shining a bright light on their collective efforts to tilt the election towards Hillary Clinton.

Pat Caddell, a respected, longtime Democratic pollster and political consultant had this to say after reviewing the differing methodologies that Reuters used to interpret the same data set, “This comes as close as I have ever seen to cooking the results.  “I suppose you can get away with it in polling because there are no laws. But, if this was accounting, they would put them in jail.”