According to the Wednesday morning pundits, Donald Trump dominated the debate last night. His performance was YUUUUUUUGE!

Donald Trump dominated last night’s final GOP presidential debate. At least that’s the analysis of many, if not most, talking head political pundits this morning. It seems they are finally warming up to the fact that The Donald is the people’s choice in 2016, notwithstanding their previously ineffective disparagement of Trump, like Fox News’ Charles Krauthammer, who called the clear Republican frontrunner a “rodeo clown.”

Krauthammer promptly learned the danger of bashing Trump, who shot back, “What, I’m being called names by a guy who can’t buy a pair of pants?” Nowadays, Krauthammer sits silently seething when the subject of discussion is Donald Trump.

Appearing ever strong, Trump was and has been bold, openly advocating many controversial proposals, like placing a temporary ban on Muslim entry to the United States until the K-1 visa program has been evaluated and overhauled to prevent future Tashfeen Maliks from killing innocent Americans on American soil. As it turns out a quick peek at Malik’s facebook page by immigration officials would have revealed her hatred of America and open advocacy of violent jihad. However, checking Muslim immigrant social media accounts has been forbidden by the Barack Hussein administration.

Several of Trump’s controversial proposals were parroted by his opponents last night. “Making our military strong again,” and “we need to secure the border” are two such Trump proposals that were repeated often by his opponents in their final debate.

Throwing all caution to the wind, Jeb the Bush repeatedly slammed Trump last night on every issue. Bush’s new image, painted by one Donald J. Trump, is that of a “low energy” weakling, which has dropped Bush from early frontrunner to single-digit loser, now dwelling in virtual obscurity.

Trump’s best line of the night was in response to yet another Hail Mary attempt by Bush, when he aimed another witless invective towards The Donald. 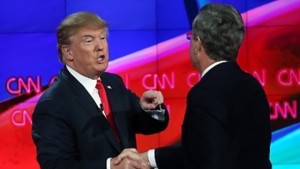 From Joel B. Pollack, Breitbart

Republican frontrunner Donald J. Trump has sometimes struggled on the GOP debate stage. On Tuesday night, he owned it.

Trump made few mistakes, despite efforts by the moderators and the other candidates to knock him out of the pole position. While Sens. Ted Cruz (R-TX) and Marco Rubio (R-FL) over past Senate votes, and other candidates repeated lines familiar from the campaign trail, Trump looked comfortable–and solid.

He may not always have had the “right” answer, but he sounded more fluent with his own positions.

At one stage, he even felt confident enough to tangle with members of the audience–supporters, it seemed, of

Sen. Rand Paul (R-KY) –who booed his idea to “infiltrate” Islamic State on the Internet.

“I just can’t imagine somebody booing. These are people that want to kill us, folks, and you’re objecting to us infiltrating their conversations? I don’t think so.”

Perhaps Trump’s rally on Monday evening was a useful warmup. There, Trump sparred jovially with left-wing hecklers and mocked the media for covering them.

Perhaps, too, grim events have conspired to affirm Trump’s “bombastic” (Carly Fiorina’s word) approach to national security: as he pointed out, both the Paris and San Bernardino terror attacks have happened since the last GOP debate.

Perhaps Trump simply knows he is sitting on a big lead.

Regardless, Trump won on Tuesday night–at times by fighting hard, at times by letting the stragglers squabble.

There were few personal attacks, no misstatements of his own policies. He faced repeated (and repetitive) attacks from Jeb Bush–often instigated by the moderators, as Trump pointed out–and simply pointed to his poll numbers.

He took a pass on Hugh Hewitt’s question about the nuclear triad. His opponents will remember. No one else will.

No one–least of all Bush–laid a glove on him after that.

The vaunted Trump-vs.-Cruz fight failed to materialize. Cruz allowed himself to become entangled in arguments over foreign policy between the interventionist Rubio and the reticent Paul, who blasted Rubio on immigration.

But it was Trump’s night.

When Hewitt asked Trump to re-affirm his commitment to staying within the Republican Party, Trump said he would do so, prompting Hewitt himself to applaud.

“I feel honored to be the frontrunner,” Trump explained.

After winning the last debate of 2015, Trump is not just the frontrunner. He is the favorite to win the nomination.