America’s once-esteemed universities are in a moral tailspin. Up is now down. Left is now right. Male is now female. But, tampons in men’s restrooms? Really?

Gender identity on American campuses is now as difficult to comprehend as Common Core math. Case in point: What would be the purpose of equipping men’s restrooms with tampon dispensers. The obvious answer is some men have vaginas. I have been in a lot of locker rooms in my six decades on this planet and I have yet to see such a man. I admit that I have never really looked that closely and perhaps a man with a vajayjay simply escaped my normally superior powers of observation. It just seems as though something like that would jump right out at you. 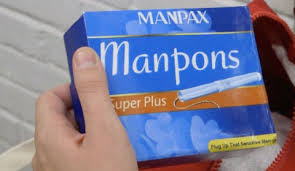 Colleges across the country are putting tampons in men’s bathrooms in an effort to bring about “menstrual equity” in restrooms, according to The Daily Caller.

The University of Wisconsin-Madison, Brown University and the University of Minnesota-Twin Cities are just a few colleges who placed menstruation products in their male and gender neutral bathrooms, reports the Chronicle.

The idea is that transgender men, women who transitioned to men, might need tampons because they still have periods.

“That’s become a really popular rallying cry and source of activism on college campuses — the idea that these products should be freely available by the schools that these students attend,” Jennifer Weiss-Wolf, who came up with “menstrual equity” explained. “This problem is eminently solvable, through a lot of avenues, and college-campus organizing is one of them.”

A student proposal for free tampons at University of Rochester won a $5,000 award from the school’s student government. The proposal suggested placing baskets with tampons and pads in some bathrooms, including a men’s room.

“We have smaller baskets in men’s restrooms, but the reason we do that is because there are some men on the campus who menstruate and so it’s just the whole idea of inclusion and making sure that nobody’s left out — it’s a very easy thing,” Lance Floto, a vice president with the student government.

Bowdoin College also put free tampons in their men’s rooms, only to have someone defecate on them.

“I feel like it was either a person who did it as a joke or didn’t understand it, or it was a deliberate thing like, ‘these people aren’t welcome in this bathroom so I’m going to poop there,’ which would be considered a bias incident,” said Vice President for Student Affairs Benjamin Painter.