Uh-oh! Cruzbots and Trump-haters, you are not going to like this! Our favorite polling source has surveyed nearly 50,000 likely Wisconsin voters and discovered….

If you are a committed Trump-hating Cruzbot, you may want to leave the room for a minute. This is just going to make you cry like a baby.

The lamestream media has been doing all it can to pull the plug on Donald Trump’s presidential aspirations. Relying on recent Wisconsin polling from Trump-hating Fox Business and Marquette University in Wisconsin, showing Canadian Cruz with a 10-point advantage in the Badger State, the clamor from the usual media suspects has been deafening: “Trump In Trouble!” “Trump Nosediving!” “Wisconsin Hates Trump!” “Trump Is Finished!”

The Real Clear Politics poll they are relying on shows Cruz leading Trump in four different March 2016 polls, the total survey sample of which is less than 2,400.

Now, here’s what the REAL people of Wisconsin are saying. Among nearly 50,000 likely voters, surveyed by ISW (isidewith.com),  likely Wisconsin voters were asked, “If the Presidential election were held today, which Republican party candidate would you vote for?” The Donald currently leads The Canadian by 13 points, 34% to 21%. Link…. Up-to-the-minute Wisconsin poll

Using ISW’s nifty, real time graphic, you can track the polling of all the GOP candidates from March 31, 2015 to this very minute. ISW is, by far, the best polling information we have found.

We are not saying that Donald Trump is going to win Wisconsin. We ARE saying that there is alternative polling available. Although not nearly as well-known as the biased establishment shills in the lamestream media, we have found ISW to be extremely reliable, with a far superior market sample. ISW shows a comfortable margin in Donald Trump’s favor.

In fact, in the time it took to compose this article, The Donald widened his gain on The Canadian by about 1/3 of a percentage point, which is a clear indication that the most recent polling (just a few minutes ago, as of 10:30 AM CST, April 3, 2016) presents a considerably different picture of the Wisconsin GOP presidential race than the picture the establishment shills in the lamestream media are painting.

I would also point out that since March 10, 2016, the race in Wisconsin has changed very little, according to ISW. Trump and Cruz have both gained about the same. On March 10, Trump led Cruz by 14 points, 31% to 17%, and now leads by 13 points, 34% to 21%. Cruz has gained one percentage point in the past three weeks, but not the wild, game-changing leap frog the MSM is asserting.

We will update this article over the next three days until Wisconsin’s GOP primary is complete and all the votes have been counted.

This just in…. from Donald Trump’s facebook page, via Powdered Wig reader, Pam Roush. Wisconsin independents prefer The Donald, too, very much in line with ISW’s polling…. 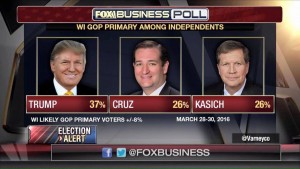