Look who was hanging out at the White House this week. Photo gallery….

President Trump invited Sarah Palin to the White House for dinner. She asked if she could bring a couple of friends.

So, Ted Nugent, Kid Rock and Sarah Palin had a fete to remember at the White House for several hours Wednesday night, as President Trump treated the high-profile supporters to a white-china private dinner, a room-by-room tour and free-range policy chat, according to The New York Times.

Mr. Nugent — a guitar demigod, knife-between-the-teeth hunter and conservative provocateur — offered an inside glimpse of a gracious, relaxed and house-proud president with ample time to offer his thoughts on a wide array of topics, from entertainment to existential geopolitical perils.

“We were there for four hours, man!” Mr. Nugent, a 68-year-old Detroit native, said in a telephone interview on Thursday, using a four-letter expletive to signal his amazement at Mr. Trump’s willingness to spend so much time with his three casually dressed visitors.

“He gave us a wonderful personal tour of every room and talked about the origins of every carpet and every painting — there was a Monet — and then we had dinner,” said Mr. Nugent, who has referred to former President Barack Obama as a “mongrel” and to Hillary Clinton with an array of unflattering epithets.

The encounter included a tour of the executive residence, a grip-and-grin session with Mr. Trump in the Oval Office and an impromptu snapshot — featuring a sneering Ms. Palin — in front of Mrs. Clinton’s official portrait as the three guests and their families left through the East Wing.

Mr. Nugent said one member of the group — he wouldn’t say who — asked the three to extend their middle fingers beneath the portrait. “I politely declined,” he said. “Let the juxtaposition speak for itself.”

Sean Spicer, the White House press secretary, described the meeting as “a long-planned” token of the president’s appreciation for Ms. Palin’s support in the 2016 campaign. But Mr. Nugent said it was much more than that.

During dinner, which ended with flaming baked alaska in honor of Ms. Palin — who stepped away from her job as governor of that state in 2009, after serving as Senator John McCain’s running mate the year before — the president and his guests engaged in a wide-ranging conversation that Mr. Nugent said included the following topics: “health, fitness, food, rock ’n’ roll, Chuck Berry and Bo Diddley, secure borders, the history of the United States, guns, bullets, bows and arrows, North Korea, Russia” and a half-dozen other issues.

It was not clear if the president expected quite as much company. The invitation was initially extended to Ms. Palin, who promptly invited the two aging, gun-loving, stringy-haired musical bad boys — Mr. Nugent, a radio icon of the 1970s, and Kid Rock, who rode the short-lived country-rap-rock trend to fame, which included a brief marriage to the actress Pamela Anderson.

Ms. Palin, whose slashing, populist-in-pumps political style prefigured Mr. Trump’s economic nationalist message, bonded with the president, another former reality TV star. She posted a raft of pictures on her website the morning after the visit, which had not been listed on the president’s public schedule. 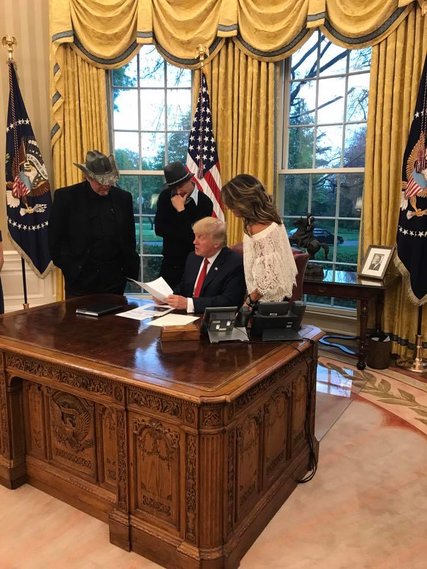 Mr. Nugent, left, said the group was at the White House for four hours. CreditVia Sarah Palin on Facebook

“Asked why I invited Kid Rock and Ted Nugent, I joked, ‘Because Jesus was booked,’” she wrote.

Mr. Nugent, who posed, capped in a camouflage cowboy hat, with a seated Mr. Trump in the Oval Office, was the subject of a 2012 Secret Service investigation after suggesting violence toward Mr. Obama during that year’s re-election campaign. 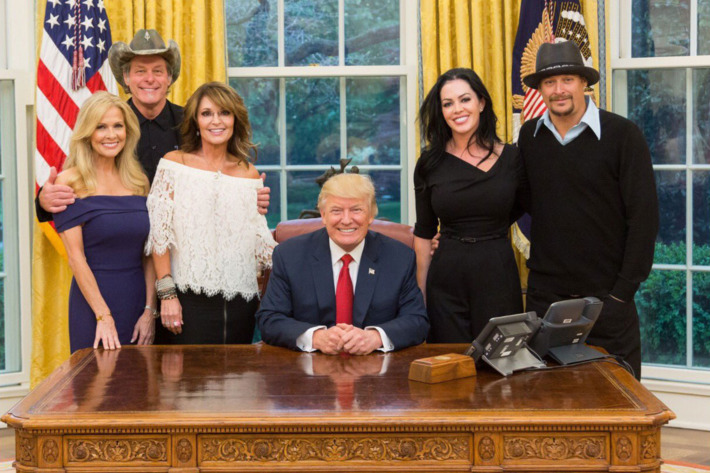 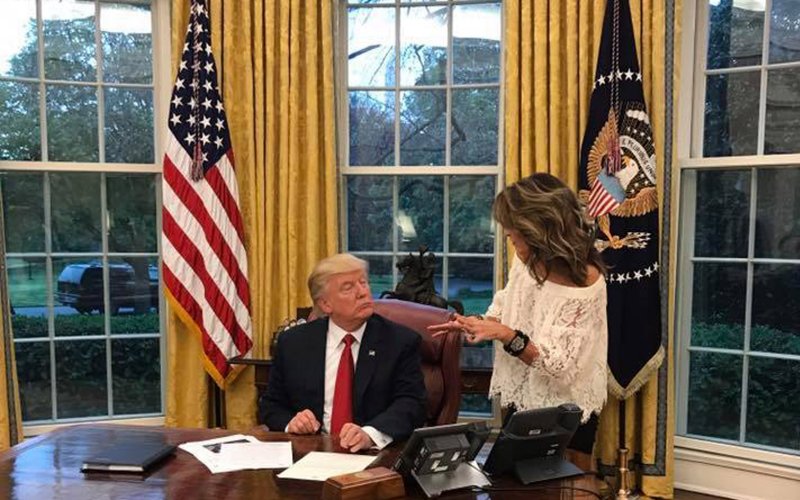 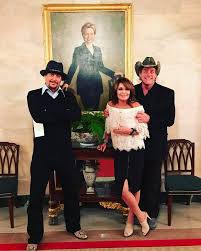 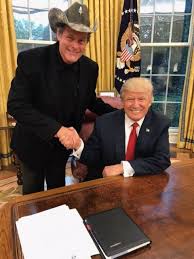