Interesting. A bit dated, but still very relevant. What would happen if all the illegal immigrants in America just packed their bags and moved back to the countries they came from?

Many advocates of illegal immigration claim that the US economy would implode if not for illegal immigrants doing jobs they claim Americans won’t do, which is not only insulting but also a complete lie.

Following is a more accurate look at what would happen if illegal immigration disappeared from America.

WHAT IF THEY LEFT?

Considering the Denver Post is a very liberal paper I’m surprised they published this. This really shows how the hiring of illegal’s is a false economic practice.

It’s sad that Tina Griego is a Free-Lance reporter for the Denver Post. She writes some really good stuff and she is a strong advocate for LEGAL Immigration homework on issues is part of her make-up and fabric ...

What if they left? 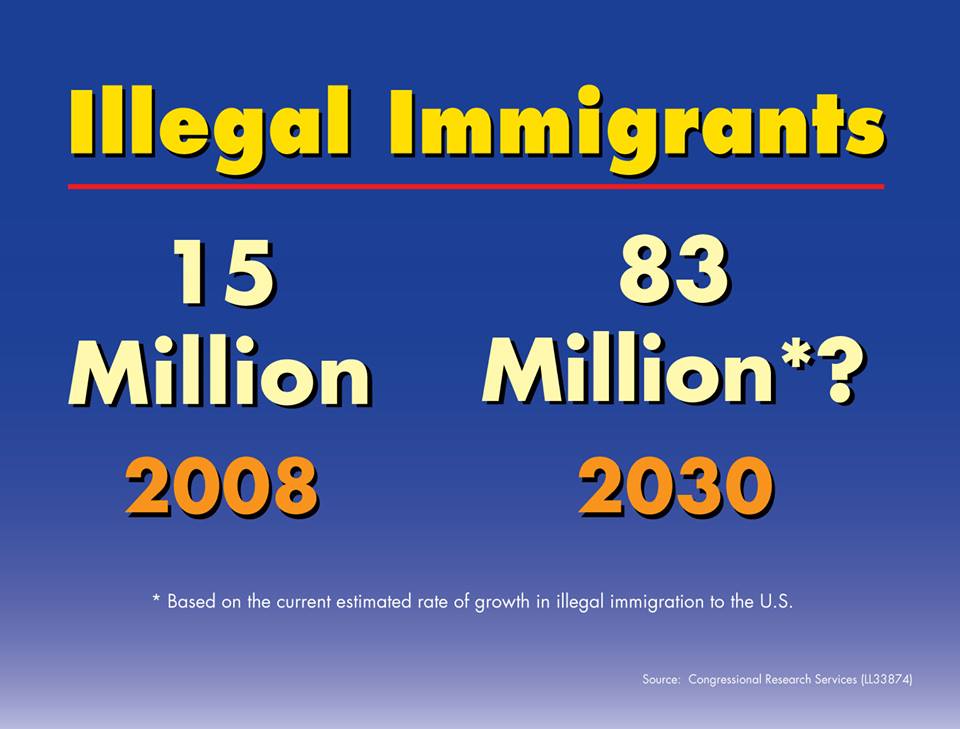 Somebody really did their homework on this one. Best on the subject to date. It does not have a political slant to it, it’s just the facts: Not Democratic, not Republican, not liberal and not conservative.

So I did my due diligence, buried my nose as a reporter into the FACTS I found below.

It’s a good question… It deserves an honest answer. Over 80% of Americans demand secured borders and illegal migration stopped. But what would happen if all 20 million or more vacated America? The answers I found may surprise you!

In California, if 3.5 million illegal aliens moved back to Mexico, it would leave an extra $10.2 billion to spend on overloaded school systems, bankrupt hospitals and overrun prisons. It would leave highways cleaner, safer and less congested. Everyone could understand one another as English became the dominant language again.

In Colorado, 500,000 illegal migrants, plus their 300,000 kids and grandchildren would move back “home,” mostly to Mexico. That would save Colorado an estimated $2 billion (other experts say $7 billion) annually in taxes that pay for schooling, medical, social-services and incarceration costs.

It means 12,000 gang members would vanish out of Denver alone.
Colorado would save more than $20 million in prison costs, and the terror that those 7,300 alien criminals set upon local citizens. Denver Officer Don Young and hundreds of Colorado victims would not have suffered death, accidents, rapes and other crimes by illegals.

Denver Public Schools would not suffer a 67% dropout/flunk rate because of thousands of illegal alien students speaking 41 different languages. At least200,000 vehicles would vanish from our gridlocked cities in Colorado. Denver’s 4% unemployment rate would vanish as our working poor would gain jobs at a living wage.

In Florida, 1.5 million illegals would return the Sunshine State back to America, the rule of law, and English.

In Chicago, Illinois, 2.1 million illegals would free up hospitals, schools, prisons and highways for a safer, cleaner and more crime-free experience.

If 20 million illegal aliens returned ‘home,’ the U.S. Economy would return to the rule of law. Employers would hire legal American citizens at a living wage. Everyone would pay their fair share of taxes because they wouldn’t be working off the books. That would result in an additional $401 billion in IRS income taxes collected annually, and an equal amount for local, state and city coffers.

No more push ‘1’ for Spanish or ‘2’ for English. No more confusion in American schools that now must contend with over 100 languages that degrade the educational system for American kids. Our overcrowded schools would lose more than two million illegal alien kids at a cost of billions in ESL and free breakfasts and lunches.

We would lose 500,000 illegal criminal alien inmates at a cost of more than $1.6 billion annually. That includes 15,000 MS-13 gang members who distribute $130 billion in drugs annually would vacate our country.

In cities like L.A., 20,000 members of the ‘ 18th Street Gang’ would vanish from our nation. No more Mexican forgery gangs for ID theft from Americans! No more foreign rapists and child molesters!

Losing more than 20 million people would clear up our crowded highways and gridlock. Cleaner air and less drinking and driving American deaths by illegal aliens!

At least 400,000 anchor babies would not be born in our country, costing us $109 billion per year per cycle. At least 86 hospitals in California, Georgia and Florida would still be operating instead of being bankrupt out of existence because illegals pay nothing via the EMTOLA Act.

Americans wouldn’t suffer thousands of TB and hepatitis cases rampant in our country – brought in by illegals unscreened at our borders.
Our cities would see 20 million less people driving, polluting and grid locking our cities. It would also put the ‘progressives’ on the horns of a dilemma; illegal aliens and their families cause 11% of our greenhouse gases.

Over one million of Mexico’s poorest citizens now live inside and along our border from Brownsville, Texas, to San Diego, California, in what the New York Times called, ‘colonias’ or new neighborhoods. Trouble is, those living areas resemble Bombay and Calcutta where grinding poverty, filth, diseases, drugs, crimes, no sanitation and worse. They live without sewage, clean water, streets, roads, electricity, or any kind of sanitation.

The New York Times reported them to be America’s new ‘ Third World ‘ inside our own country. Within 20 years, at their current growth rate, they expect 20 million residents of those colonias. (I’ve seen them personally in Texas and Arizona; it’s sickening beyond anything you can imagine.)

By enforcing our laws, we could repatriate them back to Mexico. We should invite 20 million aliens to go home, fix their own countries and/or make a better life in Mexico. We already invite a million people into our country legally annually, more than all other countries combined. We cannot and must not allow anarchy at our borders, more anarchy within our borders and growing lawlessness at every level in our nation.

It’s time to stand up for our country, our culture, our civilization and our way of life. Interesting Statistics!

Here are 14 reasons illegal aliens should vacate America, and I hope they are forwarded over and over again until they are read so many times that the reader gets sick of reading them:

1. $14 billion to $22 billion dollars are spent each year on welfare to illegal aliens (that’s Billion with a ‘B’)

3. $7.5 billion dollars are spent each year on Medicaid for illegal aliens.

4. $12 billion dollars are spent each year on primary and secondary school education for children here illegally and they still cannot speak a word of English

5. $27 billion dollars are spent each year for education for the American-born children of illegal aliens, known as anchor babies.

7. 28% percent of all federal prison inmates are illegal aliens.

8. $190 billion dollars are spent each year on illegal aliens for welfare & social services by the American taxpayers.

9. $200 billion dollars per year in suppressed American wages are caused by the illegal aliens.

10. The illegal aliens in the United States have a crime rate that’s two and a half times that of white non-illegal aliens. In particular, their children, are going to make a huge additional crime problem in the US.

11. During the year 2005, there were 8 to 10 MILLION illegal aliens that crossed our southern border with as many as 19,500 illegal aliens from other terrorist countries. Over 10,000 of those were middle-eastern terrorists. Millions of pounds of drugs, cocaine, meth, heroin, crack, guns, and marijuana crossed into the U.S. from the southern border.

12. The National Policy Institute, estimates that the total cost of mass deportation would be between $206 and $230 billion, or an average cost of between $41 and $46 billion annually over a five year period.
13. In 2006, illegal aliens sent home $65 BILLION in remittances back to their countries of origin, to their families and friends. 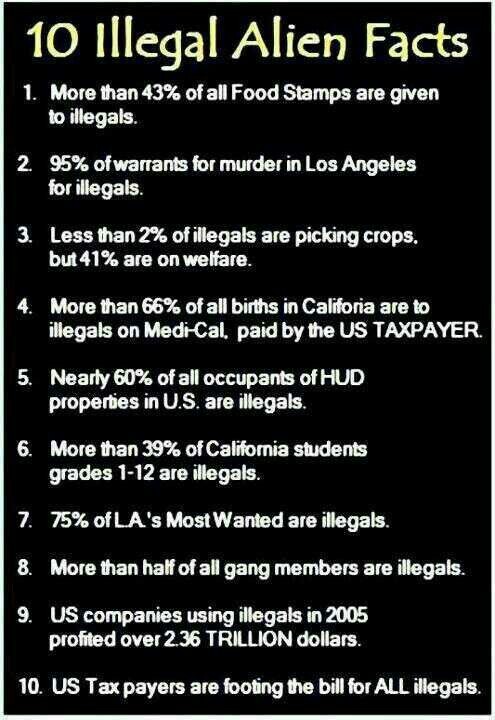