An overwhelming number of Colorado Republicans want Donald Trump for President of the United States. Too bad they didn’t get to vote

Photo, above: Resolution from the Colorado GOP, forbidding its delegates from voting for Donald Trump

I predict the GOP anti-Trump maneuver in Colorado will backfire. In fact, it already has. Cruz’s popularity numbers in the Rocky Mountain state are dropping faster than Bill Clinton’s pants. I’m sure that nosedive will bleed to states yet to hold their primaries. The result will be a net negative delegate count for the Canadian.

Of course, Canadian Cruz will likely make up for that loss by continuing his pattern of unethical maneuvering within the respective state GOP machines, stealing delegates in states where he has far less support than Donald Trump, which would be all of those states yet to hold primaries, and most of those states which already have. Do the Canadian’s supporters really want a lying, cheating, fake Christian, ineligible dirtbag in the Oval Office? Really?

So, why did the slimy Colorado GOP leadership manipulate the system to disenfranchise the voters? Because they could win no other way, and winning to them means “anyone but Trump.” They would appoint Khalid Sheikh Mohammed president before they would allow their own delegates to choose Donald Trump, who would clearly have won the Colorado primary and been awarded the lion’s share of delegates had their been a fair and open primary.

Welcome to Iran, where the people are trash and the political elite have appointed themselves God, willfully stealing the people’s liberty…. for their own good, of course.

The Colorado GOP’s “Resolution to Forbid Colorado Delegates from Voting for Donald Trump” (pictured above) should tell you all you need to know about the corrupt and detestable establishment Republican leadership, both at the state and national level. To believe that the RNC does not approve of the Colorado GOP’s disenfranchisement of its members would be simple-minded and grossly naive. To believe that they are not doing all they can to do the same thing in future state primaries is equally simple-minded and naive. 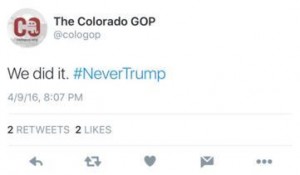 Tweet, above, from the CO GOP, was deleted shortly after posting.

THIS is why the Colorado GOP had to cheat the voters out of their rightful participation in the democratic process! The Donald has been clobbering The Canadian since early August, 2015. The treasonous scumbags who run the Colorado GOP knew who the voters wanted in our White House…. Who does Colorado want for president?