Family of Walter Scott tells Al Sharpton to stay away. Good for them! Keep that racist bastard away. He only incites hatred and division

While we await all of the evidence to be gathered and due process to take its proper course, under what possible circumstances, based on the video evidence we have now all seen (if you haven’t, it is included below), can anyone not see a senseless murder having taken place at the hands of a police officer, charged and paid to protect and defend his community – ALL of his community, including Walter Scott?

This is not a Trayvon Martin or Michael Brown situation. This was a guy who was pulled over for an inoperable tail light. A tail light! He had a standing warrant for child support, and fearing that he would be sent to jail, he ran. He didn’t want to lose his freedom. Instead, he lost his life, at the hands of a cop who decided that defying his commands warranted on-the-spot execution. A tail light! Child support! Beyond comprehension!

Walter Scott was never a threat. He was fleeing, his back to the shooter cop. Based on all of the video and eyewitness evidence at this point, he was murdered, which is the charge that the police officer, Michael Slager, who is in jail, has been charged with.

So, the media circus begins, right? Not so fast. Obviously not the media skanks the Martin and Brown families are, the Scott family has asked for privacy. Scott’s parents have specifically asked Al Sharpton, the most inciteful of race pimps, to stay away. 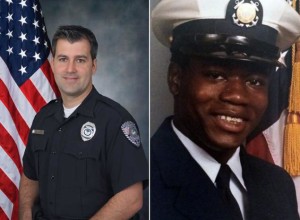 That was the message from the family of South Carolina police shooting victim Walter Scott to the civil rights activist Thursday two days before the funeral for the slain father of four.

“We don’t want another Ferguson type of circus here,” a source close to the Scott family told The Daily News.

That was a reference to the Missouri town that was rocked by violent demonstrations last year after black teen Michael Brown was killed by a white cop.

Walter Scott lies motionless in handcuffs without being given proper medical treatment by Officer Michael Slager.

Sharpton gave a rousing speech at the 18-year-old’s funeral, which was attended by thousands.

Scott family attorney Chris Stewart said they appreciate Sharpton’s support but “the funeral is only going to be close family members.”

“The Reverend Al has called and expressed his support and condolences,” said Stewart. “The family is very appreciative.”

Sharpton said he has been in touch with the Scott family and their lawyers but insisted “we had no plans to go down.”

“They are in mourning and we would never come unless they asked,” he told The News. “We’re willing to be helpful to the family but only when needed.”

In recent days, Sharpton has slammed Scott’s fatal shooting by North Charleston Police Officer Michael Slager as “senseless” and proposed nationalizing the country’s police forces as a way to curb brutality against African-Americans.

The apparent snub of Sharpton came as:

<sc42,110>Police released the dash-cam video from Slager’s cruiser, which showed Scott suddenly bolting from a car after the officer pulled him over for a broken brake light before the shooting on Saturday.

Scott is at the wheel of a Mercedes and there is a passenger in the front seat as Slager walks up and asks for his license and registration.

The doomed man is heard telling the officer he has neither and that he is in the process of buying the car.

Slager heads back to his car, where the Everland song “What It’s Like” is playing on his radio.

Slager, 33, a six-year veteran of the North Charleston police, is in jail and being investigated by the FBI, the U.S. Department of Justice, and the South Carolina Law Enforcement Division.

Scott, had served in the U.S. Coast Guard and had no history of violent crimes, although he had been jailed three times — most recently in 2012 — for failing to pay child support.

Bamberg’s announcement came as another black man named Mario Givens came forward with claims that he was attacked and arrested by the white copfor no reason in 2013.

Slager’s fatal encounter with Scott began at 9:30 a.m. Saturday. He told his superiors he opened fire after struggling with Scott — and after the victim ran off with his Taser.

But the video showed Scott running away and at least 15 feet from Slager when the officer fired the first of eight shots — four of which struck him in the back and one of which hit him in the ear.

Slager was seen cuffing Scott, who was face down in the grass and not moving. Then Slager was seen retrieving something that looks like a stun gun and dropping it by Scott’s body.