Wal-Mart tells senior vet and greeter that he can’t wear his military cap, yet a Muslim employee is allowed to wear her traditional headdress

This incredible story comes from Lee Young, owner of Hitman Firearms in Utica, Ohio. He was outraged recently over two separate incidents he witnessed at a local Wal-Mart.

In the first instance, Lee described an elderly Wal-Mart greeter who is also a proud veteran named Val, who was known for his military cap, which he had adorned with various pins of units he had served in.

The politically correct morons at Wal-Mart recently informed Val that he could no longer wear his military cap, which sent Lee into a verbal assault that he directed at a member of Wal-Mart management.

In the second instance, Lee was shocked when he was in the checkout line in the same Wal-Mart with yet another Wal-Mart employee, who was also an obviously proud Muslim, sporting her traditional Muslim headdress, which was completely fine with Wal-Mart management.

One of those Wal-Mart employees signed a blank check for up to and including his very life so that your freedom would be preserved. Guess which one! 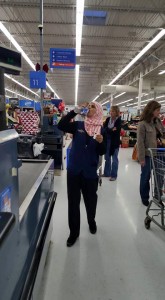 Share if this bothers you as much as it did me……..

It’s long but I promise it’s worth the read.

No better way to make my blood boil!

So for the past however long I can remember there has been a older gentleman by the name of Val who is a greeter at Walmart. This man is a Veteran and very proud to be. You don’t need to know him or even speak to him, although I thank him for his service every time I see him, because he illustrates his pride through the highly decorated Veteran baseball cap he wears……or….used to wear.

One day I as I walked in I noticed a bright blue Walmart hat on his head with all the military pins that once adorned his wore out faded military cap and I asked him about it. We both had tears in our eyes as I wished him a blessed day and shook his hand before I left. His reply was simple and full of hurt, “corporate will not allow me to wear that hat anymore while on the clock, because it goes against the dress code”.

I was so furious that I demanded to talk to a manager that day and I’m sure she will never forget my face or the angry words that I shared with her. Since then I try not to ever shop at Walmart unless there is no other choice.

Today was one of them days that I needed something and stopped into the Okemos Walmart. As I’m standing in line to pay this woman in her Walmart vest steps into line behind me and immediately I was outraged! So one of our own who signed his life away to protect our freedoms and homeland cannot wear his simple old hat but this woman can wear a headscarf proclaiming her love of the Muslim culture and her dedication to Allah!? Kiss my ass Walmart!!!!