With voter fraud highly suspected in Florida and Arizona, why haven’t we fixed this? I have a short list of rules that will fix voter fraud forever

Two elections in Florida, one for governor and one for senator are in limbo as they are very close races and suspicious ballots continue to turn up and be counted in Broward and Palm Beach Counties. Nearly all of those ballots are votes for Democrat candidates, who lost close races to their Republican opponents, Ron DeSantis for governor and Rick Scott for US senator.

According to The Capitolist, “Republicans Rick Scott and Ron DeSantis may be in trouble.  Despite clear margins of victory for both men on election night, Democrat election supervisors in Broward and Palm Beach counties say they aren’t done tallying up votes. Two days after the polls closed on Tuesday night, Democrat candidates Bill Nelson and Andrew Gillum benefited from nearly 46,000 Democrat votes that have been “found” in those counties and added to the statewide election outcome, throwing Florida into a partisan uproar over mandatory hand and machine recounts and the possibility that the integrity of the election process has been compromised.”

Although many cases of voter fraud have been reported across Florida, the most egregious cases have been reported in Broward and Palm Beach Counties, committed by election officials in those counties. Read this sworn account by a temporary employee of the Broward County Supervisor of Elections (SOE) office. She watched as four SOE employees were busily filling out (falsifying) ballots. She was fired the following day with no reason given for her termination. Link to Chelsey Smith’s sworn affadavit…. http://cafr1.com/11-03-2016-Chelsey-Smith-SOE-Affidavit.pdf 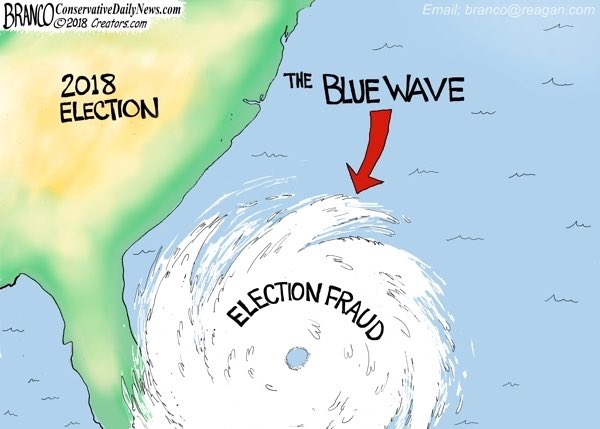 Likewise, the Arizona election for Jeff Flake’s senate seat is a complete mess, with ballots still coming in from around the state and many cases of voter fraud suspected. The lead has gone back and forth since election night, but the latest news has Democrat Kyrsten Sinema leading Republican Martha McSally by a fraction of a percentage point.

Just out — in Arizona, SIGNATURES DON’T MATCH. Electoral corruption – Call for a new Election? We must protect our Democracy!

Affidavit filed by Broward Election’s employee in support of Caldwell lawsuit provides eye witness account of Elections staff filling in blank ballots. When this was reported the employee was fired and told not to come back. #sayfie

It’s actually disheartening to fight for this country; watch friends bleed and die… see what socialists are doing and then listen to these fucking democrats defend this.

I agree with that, and if we want to stop this un-American corruption from spreading, she must be sentenced to a lengthy prison term. I'm not sure what the law allows, but 20 years is not too severe for such an egregious violation of the people's trust.

Fair and honest elections are as important to democracy as freedom itself, lest we should become Venezuela, and we know we have a problem with voter fraud. But, how big a problem is voter fraud and how easy is it to commit voter fraud?

“New York City’s watchdog Department of Investigations has just provided the latest evidence of how easy it is to commit voter fraud that is almost undetectable,” reported National Review in 2014 (remember when National Review was a conservative publication?). “DOI undercover agents showed up at 63 polling places last fall and pretended to be voters who should have been turned away by election officials; the agents assumed the names of individuals who had died or moved out of town, or who were sitting in jail. In 61 instances, or 97 percent of the time, the testers were allowed to vote. Those who did vote cast only a write-in vote for a “John Test” so as to not affect the outcome of any contest. DOI published its findings two weeks ago in a searing 70-page report accusing the city’s Board of Elections of incompetence, waste, nepotism, and lax procedures.”

Now, get this. The New York Board of Elections had 350 employees and a $750 million annual budget. Not kidding! Over $2 million per employee per year. And, exactly what do they do? My guess is almost nothing, and they aren’t very good at that. Seriously, what do they do? Dust off the voting machines once a year and put them in place, count the ballots, then haul the machines back to the warehouse? Really? For $750 million a year? Everyone knows New York is corrupt as hell, but this is off-the-charts corrupt! And, the last place we need corruption is in our voting system. It is a total “disaster,” to coin one of President Trump’s favorite words.

What can we do about the corruption and voter fraud? A lot more than we have been willing to do about it, which is NOTHING!

I believe I know how to stop voter fraud in its tracks. Before sharing that list of Madison’s Voting Rules and Requirements I compiled two years ago, I would like to address the 26th Amendment, the amendment that made 18-year-olds eligible to vote, which is ridiculous. Stick to voting for Prom Queen. Leave the heavy lifting to the adults. Granted, there is a small minority of youngsters mature enough to responsibly carry out the serious duty of voting, but the vast majority of 18-year-olds simply do not possess the maturity or life experience necessary to perform this important civic duty. Democrats now want teenagers as young as 14 to be given the privilege (voting is not a right) to vote. The less savvy and educated voters are, the more Democrats like them. I believe the only 18-year olds who should be eligible to vote are those in our armed forces. Personally, I believe 21-year-olds (non-military) are too young to vote. I would not be opposed to moving the minimum voting age to 25 or even 30.

How to remove fraud and corruption from the American voting system….

Madison’s Rules and Requirements for Voting

Also, watch for this potential development in the case of Florida’s electronic recount. Powdered Wig reader Renee H sent me a link to a story a few days ago involving Hillary Clinton having control of or major influence with DigiCert, the company that provides encryption and SSL certification for Florida’s electronic voting and counting machines. I am not sure what that means in terms being able to manipulate the results of an election, but I hope that is being watched closely. One thing is certain, do away with everything electronic and we won’t have to worry about that.