And this woman is an ENGLISH teacher?! No wonder our high schools are turning out inferior products!

From Associated Press, via Fox News

DUNCANVILLE, Texas –  A Dallas-area school board fired a teacher Friday who posted racially charged tweets about the fatal shooting of a black 18-year-old by a white police officer in Ferguson, Missouri.

Duncanville Independent School District trustees unanimously voted to terminate Vinita Hegwood’s contract. Hegwood, who is black, has apologized for comments made Nov. 7 on her Twitter account that were laced with expletives and derogatory references to whites and blacks. Administrators have called the remarks “reprehensible.”

Hegwood, who taught English at Duncanville High School, was placed on unpaid leave Monday. She apologized in a statement Thursday and submitted her resignation, but the school board rejected a resignation and instead fired her with cause. That doesn’t affect a teacher’s pension, but it makes him or her ineligible for unemployment benefits, and future employers are told the teacher didn’t leave in good standing, school district spokeswoman Lari Barager said.

The tweets were related to the case of Michael Brown, who was unarmed when he was fatally shot Aug. 9. The shooting prompted protests, including some that turned violent, along with ongoing unrest in and around Ferguson, which is just outside St. Louis.          Read more…. 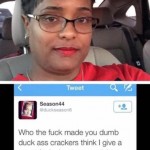