Well, well, check it out! Russian attorney who met with Trump Jr. met with Obama’s Ambassador to Russia 8 days later. Why?

So, here is what we know so far. Don Trump, Jr. met with Russian attorney Natalia Veselnitskaya. BFD! Lots of people meet with lots of attorneys all over the world.

The attorney herself has admitted the topic of their meeting was Russian adoptions in the US, and she does NOT work for the Kremlin. Therefor, the meeting is officially a big nothingburger.

Now, look at what has been discovered. The Russian attorney who met with Don, Jr. also met with Barack Hussein’s Ambassador to Russia Michael McFaul eight days later. Veselnitskaya is seated to the left of Ambassador McFaul in the photo below…. 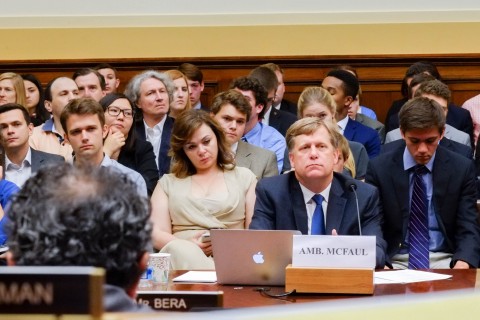 Forget the hypocrisy for a moment of a Republican meeting with a Russian and is condemned in the media for it, yet a Democrat and Obama operative meeting with the same Russian days later is “Nothing so see here, folks, move along!”

WHY was a Barack Hussein operative meeting with the same attorney who met with Don, Jr. just days before? Were they working a plan to implicate young Don in something?

From the start, it was a weird meeting. Don the younger had been told that the attorney wanted to share incriminating information about Hitlery Clinton, which was a lie, as she shared no information of any kind on Clinton, proclaiming only that she had such information. She then talked about Russian adoptions in the US, which Don, Jr. figured was why she lied to get to see him in the first place, and he ended the meeting.

According to The New York Times, “When he was first asked about the meeting on Saturday, Donald Trump Jr. said that it was primarily about adoptions and mentioned nothing about Mrs. Clinton.

But on Sunday, presented with The Times’s findings, he offered a new account. In a statement, he said he had met with the Russian lawyer at the request of an acquaintance from the 2013 Miss Universe pageant, which his father took to Moscow. “After pleasantries were exchanged,” he said, “the woman stated that she had information that individuals connected to Russia were funding the Democratic National Committee and supporting Mrs. Clinton. Her statements were vague, ambiguous and made no sense. No details or supporting information was provided or even offered. It quickly became clear that she had no meaningful information.”

He said she then turned the conversation to adoption of Russian children and the Magnitsky Act, an American law that blacklists suspected Russian human rights abusers. The 2012 law so enraged President Vladimir V. Putin of Russia that he halted American adoptions of Russian children.

“It became clear to me that this was the true agenda all along and that the claims of potentially helpful information were a pretext for the meeting,” Mr. Trump said.

Two people briefed on the meeting said the intermediary was Rob Goldstone, a former British tabloid journalist and the president of a company called Oui 2 Entertainment who has worked with the Miss Universe pageant. He did not immediately respond to messages seeking comment.”

In the following video, it takes Mika Iwannagivtrumpalewinsky all of three seconds to claim that Veselnitskaya is “Kremlin-connected,” which she has denied repeatedly from the start. There is ZERO evidence to support such a claim and the Kremlin says they have no idea who she is.

Now, watch the following video as a parade of Democrat scumbags (7:45 mark) make clear the purpose of Veselnitskaya’s meeting with Don Trump, Jr. – to create another lie tying the Trump campaign to the Kremlin.

So, by all appearances, here is how the newest Russian fairy tale seems to have been arranged and conducted:

Someone, somewhere (DNC? Hitlery?) convinced (hired) Rob Goldstone to arrange the meeting, the subject of which was supposed to have been information damaging to Hitlery. Coming from a friend and trusted acquaintance (Goldstone), any campaign official would want to hear such information.

The meeting took place. Don, Jr. was lied to. The meeting was not about Hitlery at all, it was about Russians adopting Americans. Thus, Trump abruptly ended the meeting and moved on with his life and getting his father elected President. That’s it. The end.

Fast forward a year and the Democrats are firing what I hope is their last pitiful bullet, one last ditch effort to join Trump and Putin at the hip. They have NOTHING here. It is another corrupt, poorly-engineered Democrat nothingburger. This should be investigated thoroughly by DOJ. All signs point to the Democrats, who are going to be exposed yet again as liars and gutter trash.

Not that it matters a lot at this point, but apparently Veselnitskaya was an illegal immigrant at the time of the meeting, having overstayed her visa, the extension for which had been denied.