Dear Millennials and other brain-dead Bernie supporters: Before you pull the lever for Bernie, read this real-life story of socialist Venezuela

Among the most disastrous social/political changes we Americans have permitted in modern time is the 26th Amendment to our constitution, which gave 18-year olds the privilege (it is not a right) to vote.

I would like to see the 26th Amendment repealed and replaced with an amendment making 25 the minimum voting age, and I am not opposed to 30, or even 35. I would also include other qualifications to vote. Voting is not only a civic duty, it is a serious matter that should not be entrusted to the immature and inexperienced. Not because they are stupid. Heck, they voted for Prom Queen just fine, but the Prom Queen does not have the power to send our young heroes off to die in foreign wars or shove tyrannical executive orders down the throats of We the People.

Simply put, youngsters lack the maturity and life experience to competently make such grave decisions as electing a President of the United States. Keep in mind this is a generalization. There are certainly youngsters who are exceptions to the rule, but not many.

Case in point: Milleinnials, which are generally defined as those born after 1980, overwhelmingly prefer Bernie Sanders and Hillary Clinton to Donald Trump or any other candidate. Obviously, to those of us who have watched the horrors and mass misery of socialist experiments in the former Soviet Union, Communist China, North Korea, Cuba, Venezuela, and other miserable hellholes around the globe, socialism is a very bad idea, and 180 degrees counter to our founding principles, which are responsible for the individual liberty and prosperity we Americans enjoy today.

However, to Millennials (generally), socialism is the utopian model, simply because it is a wonderful idea, and it is until you study it closely, and/or, are old enough to have seen its effects on those subjected to its control .

Obviously, few Millennials have thought through socialist philosophy long enough, nor studied it closely enough, to connect the dots, which would be easy to do if they were to witness its effects first hand. In a nutshell, Millennials lack the benefit of our (seasoned citizens’) experience.

So, dear, sweet Millennials, of whose generation I am the proud father of four members, if you want to see a REAL LIFE, REAL TIME socialist experiment underway and about to go way under, look no further than Venezuela, not long ago a country flush in oil cash, now a nation of rampant crime and mass misery, with a starving population. Martial law and total collapse of the Venezuelan economy are close at hand, all because the former leader of Venezuela, Hugo Chavez, convinced the people that the free lunch (provided by $100 per barrel oil) would go on forever.

Instead of salting away their profit and building their collective prosperity, Venezuela decided to throw a national party that they believed would be perpetual. Corruption and government giveaways (social welfare) were wonderful when the money was there to pay for it.

Now that the money is gone, thanks in large part to a spike in domestic US oil production, which has contributed to lower global market crude prices, the Venezuelan party/experiment is over, as are all parties, at some point, paid for with other peoples’ money.

Now strapped with runaway inflation, nationwide food shortages, and a massive crime wave, Venezuelans are a desperate people. The country is on the brink of martial law and economic implosion. To give you an example of the level of misery in this starving and ruined nation, a hamburger now costs $170 in Venezuela.

THAT is what happens, Millennials, when you dream instead of plan. My advice is to consider carefully Bernie’s and Hitlery’s socialist utopian carrot-on-a-stick lies and fantasies, which they are leading you around with, then juxtapose their pie-in-the-sky promises with the real life, real time example of Venezuela, and vote accordingly.

I apologize to Bernie Sanders for calling him a liar. Bernie is not a liar. He is simply a dreamer who never had a real job. He is completely unable to connect the dots between free lunches for everyone to economic collapse. With just a little REAL life experience, it isn’t hard.

Hitlery is a liar. A corrupt, criminal, vicious liar.

So, if those are your choices, Millennials, and you are sticking to them, and you in fact succeed in electing one these two socialist dirtbags, God Help us all. 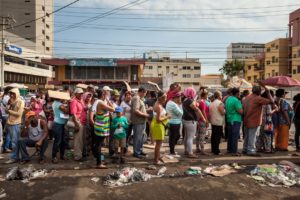 Troops have been deployed around Venezuela’s capital of Caracas and in ‘every strategic region’ this weekend during the country’s largest ever military exercise.

The government claims the exercises are in response to the threat of invasion from the United States, but the real reason for the government’s state of emergency declaration is likely much closer to home.

For over a year now, Venezuelans have been suffering under an ever deepening economic and political crisis.

Bare supermarket shelves are common. Vital medicines are in short supply. Crime is rising. Blackouts occur daily. To save electricity, the government asked public sector workers to only show up on Mondays and Tuesdays – and this could soon extend to private companies as well.

All this in one of the largest oil producing nations on earth. 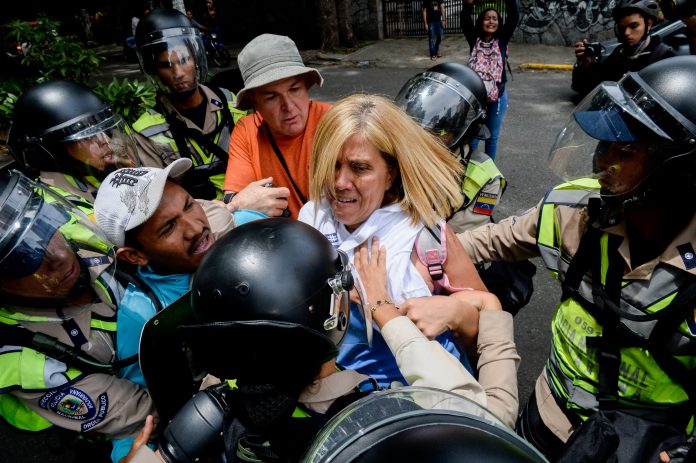 After the 2013 death of the country’s fiery socialist president, Hugo Chávez, Venezuela has been led by the increasingly unpopular former Vice President, Nicolas Maduro. Since then, economic mismanagement and a massive decline in oil revenues have led to a spiraling crisis.

The president, outnumbered by opposition parties, faces violent protests and a push for new elections. A March poll showed more than 60% of Venezuelans think Mr Maduro should resign or be removed.

It was against this backdrop that the Defence Minister appeared on state television this week.

“Venezuela is threatened,” he said. “This is the first time we are carrying out an exercise of this nature in the country. In terms of national reach, it’s going to be in every strategic region.”

The statement came after the United States – somewhat provocatively – declared Venezuela a national security threat and sanctioned officials they claimed were responsible for corruption and human rights abuses. US Prosecutors have also charged a number of former officials with trafficking cocaine.

President Maduro claims this is evidence of an attempted coup, citing the threat of a US attack when he declared a state of emergency. National security provisions now allow the government to impose tougher security measures, take control of basic goods and services, and distribute and sell food.

Maduro has also made dangerously anti-democratic statements, telling foreign journalists that parliament has “lost political validity” and “it’s a matter of time before it disappears.”

A handout made available by the Miraflores Press shows President Nicolas Maduro waving as he takes part in an event in Caracas, Venezuela, 19 May 2016.

It didn’t have to be this way

According to the World Bank, economic growth and resource redistribution under Chávez led to a significant decline in poverty. Inequality in Venezuela fell to one of the lowest rates in the region.

But the country’s success was built on a house of cards – oil prices.

In 2014 prices were over $100 USD a barrel, now a barrel trades at $48, having earlier dropped to around $30. The collapse has accelerated economic decline in the country, where government run businesses have been accused of corruption and inefficiency.

“They made the assumption that oil prices would remain high and they didn’t use the fat years wisely,” an international development official told SBS, “[they] did the opposite of diversifying the economy, throttling the private sector.”

“Ironic that they demonise the US – yet the US is the biggest buyer of their crude,” they said. Meat shelves are empty at a supermarket in Caracas, the capital of Venezuela, on March 3, 2015.

It’s not just the US which has come in for criticism – President Maduro has blamed immigrants from neighbouring Colombia for the economic crisis.

Last year, hundreds of Colombians in the border region were expelled and the border closed. The president accused immigrants of smuggling and paramilitary activity.

“Nonsense, they were mostly poor families,” a diplomatic source in Colombia told SBS.

President Maduro’s actions have been testing the patience and restraint of Colombia, which last week hosted an event bringing together almost all of Colombia’s former presidents in support of the Venezuelan opposition.

Some of the former leaders usually wouldn’t talk to each other, the source said. “Maduro is so disliked that he brought them together,” they said.

Her husband, Leopold López, was imprisoned for inciting violence, a move criticised by Amnesty International and the UN High Commissioner for Human Rights.

Colombians line up to donate medical supplies and diapers during the “Rescue Venezuela” campaign in Bogota, Colombia, Thursday, May 19, 2016.

With the crisis only deepening, the role of the military may prove significant.

With his militarized declaration of a national emergency, the 53-year-old president appears to believe the armed forces will be useful in holding power.

Unlike President Chávez before him, President Maduro does not come from a military background. He has nevertheless sought to keep top brass on side.

According to Alexandra Ulmer for Reuters, the military controls roughly a third of ministerial posts, is regularly praised by President Maduro, and has been given control of an oil services company.

General Vladimir Padrino, chief of the armed forces, is President Maduro’s Defence Minister. In his statements on television he appears to be backing the president’s crisis strategy.

Members of the Armed Forces including national reserve members take part in military maneuvers at a western district in Caracas, Venezuela, 20 May 2016.

The opposition also believes the army could be key.

Reuters reported opposition leader Henrique Capriles as this week claiming he had “high-placed allies” in the army.

“I want to tell the armed forces that the hour of truth is coming,” he said. “You must decide whether you’re with the constitution, or Maduro.”

The National Assembly speaker, Henry Ramos Allup, has also called for a resolution.

“We don’t want a bloodbath or a coup d’etat,” AFP reported him as saying.

Whatever the resolution, Venezuelans will continue to suffer the consequences of political and economic turmoil.

In the The Atlanic, Venezuelan writers Moisés Naím and Francisco Toro said what their country was experiencing was “monstrously unique.”

“It’s nothing less than the collapse of a large, wealthy, seemingly modern, seemingly democratic nation just a few hours’ flight from the United States.”