I was in the oil biz in the early 90s. A new technology called horizontal was all the rage in the Texas oil fields and had made drilling a dry hole an unlikely prospect. Times were good.

OPEC, as is its custom, glutted the market with oil, driving the barrel price down to squeeze out the new Texas oil boom.

It worked, making Texas oil unprofitable. OPEC had achieved its goal via market manipulation. They would drop prices when needed to squeeze out competitors, then raise the price when their monopoly was safe.

Fast forward nearly three decades and US oil production is flourishing again and this time there is nothing OPEC can do about it.

From ANWR to the Dakotas to the Pennsylvania/Ohio/West Virgina oil and gas fields to Texas, US oil production has surpassed Saudi Arabia and continues to expand.

As US oil production surges to record highs, surpassing Saudi Arabia, rig counts continues to rise (up 7 last week, up 5 of the last 6 weeks) suggesting more production is to come. 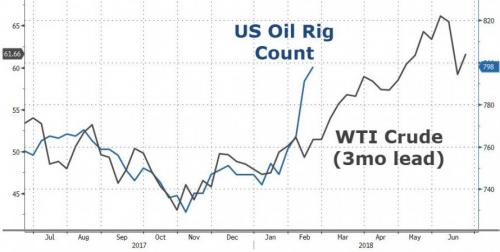 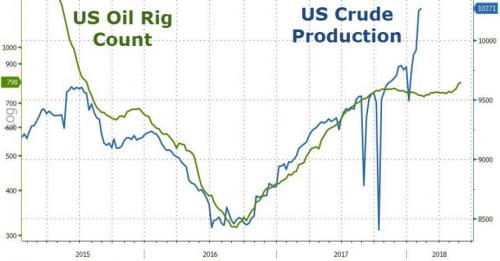 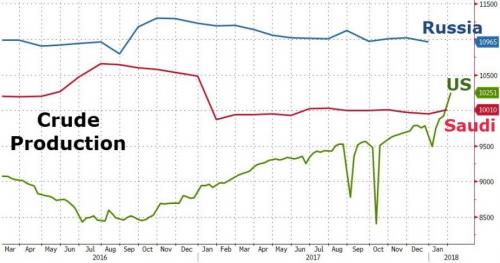 All of which has prompted OPEC and Russia, along with other countries participating in the oil production cuts aimed at balancing the market, are looking to create a “super group of oil producing countries,” according to a report from The National.

As OilPrice.com’s Nick Cunningham details, the move would institutionalize the framework that has been in place since late 2016, when OPEC, plus a group of non-OPEC oil-producing countries led by Russia, cut output by a combined 1.8 million barrels per day (mb/d). The trick has been keeping everyone on board with the limits for an extended period of time, with multiple extensions, while also trying to figure out what to do when the oil market reaches the long-sought after “balance.”

The fear has been that all participants would return to producing flat out, ramping up production in a short period of time, a specter that threatened to crash oil prices all over again. Up until now, OPEC has maintained a shockingly high level of compliance, although that has been aided by the involuntary cuts (i.e. collapse) of output in Venezuela. Still, OPEC and its coalition partners have been cagey about what they plan on doing at the end of this year, offering soothing but vague comments about a “gradual” exit.

But, according to The National, the “super group” led by Saudi Arabia and Russia would offer an institutional framework to manage the oil market post-2018. They hope to create a draft proposal before the end of the year. The goal is “together with the secretary general [of Opec, Mohammad Barkindo], to put together a draft agreement for this group [of 24] to stay together for a longer time,” UAE’s oil minster Suhail Al Mazrouei, who currently holds the OPEC presidency, told The National in Abu Dhabi.

In an optimistic scenario, Al Mazrouei said, the draft would be signed by all 24 participants by the end of 2018. The report comes just days after OPEC Secretary-General had hinted that the “building blocks” for a permanent OPEC/non-OPEC arrangement were forming.

The significance of this, if it comes to pass, is profound. OPEC has been around for a long time, cutting output when the market gets oversupplied and ramping up when prices spike. Market management from the cartel has proven to reduce price volatility, although it often translates into higher prices. The period between 2014 and 2016, when OPEC eschewed intervention and let the market sort things out on its own, was characterized by wild price swings, volatility and uncertainty.

A return to management at the end of 2016 brought back stability to a large degree, while also raising prices. And the cuts, both in absolute terms as well as the psychological impact on the market, were augmented by the participation of Russia and the other non-OPEC producers.

A permanent arrangement would extend this level of stability. That isn’t to say that volatility won’t occur (it will, of course), but only that there are greater odds of less volatility relative to a situation in which they abandoned cooperation altogether.

The surge in U.S. shale production complicates their plans, but also makes the vow to cooperate beyond the current agreement all the more substantial. A world in which the U.S. is adding upwards of 1 mb/d of new supply in a single year is also one in which OPEC’s tinkering with output levels would be crucial to avoid another price collapse.

UAE’s oil minister Al Mazrouei said he doesn’t see a reason why “we cannot continue to work in the future, it’s [down to] what framework we deliver together with the secretary general to ensure we are giving something reasonable for everyone to adapt,” according to The National.

For now, OPEC compliance remains well above 100 percent, and all signs point to continued cooperation for the remainder of the year. Some investment banks and market analysts have predicted that OPEC would overshoot the balancing target, draining inventories below the five-year average at some point around mid-year, which could result in a deterioration of compliance levels. Saudi oil minister Khalid al-Falih said that the OPEC/non-OPEC group would continue to keep the limits in place, even if it meant tightening too far.

“If we have to err on over-balancing the market a little bit, so be it,” Falih said after meeting Russian Energy Minister Alexander Novak in Riyadh, according to Reuters. “Rather than quitting too early and finding out we were dealing with less reliable information … Stay the course and make sure that inventories are where the industry needs them,” he added.