Anyone who believes that the powers that be at Facebook are not engaging in politically partisan manipulation of the social media giant is not paying attention, to be kind.

We right-wing publishers happen to know from first-hand experience the manipulation that is underway by Facebook, Twitter, and Google (which includes YouTube). It is a politically partisan war, the left on an evil mission to ensure that only one side, their side, is heard. It is also an egregious violation of the First Amendment.

Powdered Wig has seen its social media traffic drop by 80% since the election of Donald Trump as President of the United States.

Many, especially those on the left, blame social media, Facebook in particular, for Trump’s election.

Likewise, social media executives agree that it was their very own social media platforms that were responsible for President Trump’s rise to the White House.

They flatter themselves. It was the message, not social media, that elected President Trump. Social media was only one conveyance of the message. America was hungry, starving even, for one leader to step up with an “America First” message and promise. Donald Trump was and is that leader.

Now, the left, which includes the vast majority of those who live and work in Silicon Valley, believe the only possible answer to prevent another patriot from reaching the Oval Office is to intentionally prevent the patriot’s “message” from reaching the people, which is, of course, a gross violation of the Constitution, but since when did that matter to liberals?

As a result, we the conservative publishers across the right-wing blogosphere, who support President Trump and all patriots, are having our voices suppressed, our traffic manipulated and cut off.

It’s as though a critically important debate between a liberal and conservative candidate for national office is scheduled and every network is carrying the event live. Would the networks get away with cutting off the mic of the conservative candidate and obscuring his or her face? That is what Facebook is doing.

No patriot is exempt from Facebook’s immoral manipulation, not even President Trump, whose Facebook engagement dropped by nearly half in a single month while the engagement of liberal politicians, like Liz Warren and Bernie Sanders was untouched. 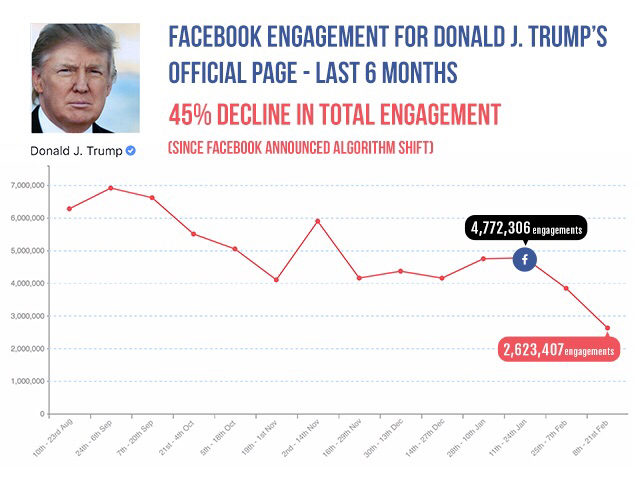 Engagement on Donald Trump’s Facebook posts has dropped by approximately 45 percent since the platform introduced a new algorithm change, following a year of pressure from left-wing employees and the mainstream media for “allowing” the President to win the 2016 general election.

In January, Facebook introduced a major change to its newsfeed algorithm. In a post, CEO Mark Zuckerberg claimed that the change aimed to give greater emphasis to posts from “friends, family and groups” and less to “businesses, brands and media.” The change was followed by a promise to promote what Facebook calls “broadly trusted” news sources on the platform.

In the month following the algorithm change, engagement on Donald Trump’s Facebook posts dropped sharply. Total engagement dropped by approximately 45 percent, according to data from leading social media analytics firm NewsWhip. In an email to Breitbart News, a representative of Newswhip confirmed that Breitbart’s reading of the data was accurate. The decline in engagement on Trump’s Facebook cannot be attributed to a drop in posting frequency on the part of Trump. In the 13 days prior to Facebook’s algorithm change (28 Dec – 10 Jan), Trump made 67 posts, with no significant drop in engagement. After the change, Trump posted at roughly the same rate – between 59 and 67 posts in each 13-day period, but was still met with the dramatic decline in engagement seen above.

When compared to high-profile Democratic political figures, Trump’s engagement appears to have been hit particularly badly. Elizabeth Warren and Bernie Sanders do not appear to have suffered a comparable decline in Facebook engagement. Even if they did face a similar decline, it would not be comparable in terms of impact. As the graph above shows, they are far less successful on Facebook than President Trump, which means they have far less to lose. Currently, any change that reduces the reach or engagement of public figures on Facebook will disproportionately affect Trump when compared to public figures with much lower engagement.

“Pages may see their reach, video watch time and referral traffic decrease. The impact will vary from Page to Page, driven by factors including the type of content they produce and how people interact with it.”

Facebook’s algorithm change came after a year of pressure from the media, politicians, and employees inside Facebook following the election of Donald Trump. Facebook was accused of helping Trump win the election, spreading Russian propaganda and fake news, and creating partisan echo chambers.

In a piece entitled “Inside Facebook’s Two Years of Hell,” Wired highlighted the threat from legislators with a foreboding quote from Democratic Senator Dianne Feinstein. “You’ve created these platforms, and now they’re being misused, and you have to be the ones to do something about it … or we will.”

Translation: “You allowed President Trump to be elected, and you have to be the ones to do something about it … or we will.”