SMOKIN’! The Trump trade policy has resulted in another historic plunge of the US trade deficit

MAGA to the max!

One month after the biggest plunge in the US trade deficit since the financial crisis – good news for Trump who has engaged in “trade war” with the rest of the world to boost US trader and exports – the good news continued in April, when according to the Census Bureau, the US deficit shrank again, down 2.1% from a revised $47.2BN to $46.2BN – the lowest since September 2017, and beating not only the $49BN consensus estimate, but also also the lowest Wall Street estimate of $46.2BN. 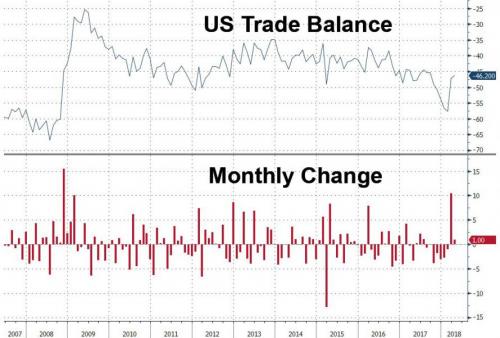 The number was so good, some were wondering why Trump didn’t pre-tweet it, as he did with the payrolls report.

Why would he do that? To have the Democrats and their official communications division, aka the mainstream media, accuse him of releasing classified information?

Incidentally, with today’s revision, the March plunge in the US trade deficit has now risen to $10BN, the highest since 2008, and the second biggest improvement in the US deficit on record.

According to the census bureau, the deficit decreased from a revised $47.2 billion in March to $46.2 billion in April, amid a perfect trade environment as exports rose and imports declined for the second month in a row, or as Trump would say, “his policies to boost US trade worked.”

Of course they worked! It isn’t rocket science. Increase exports, decrease imports – BOOM! Trade deficit reduced! The expansion of the manufacturing base which resulted from the corporate tax rate cuts is largely responsible for both. America now being an oil and gas exporter instead of a helpless importer will further reduce the trade deficit.

Again, not rocket science. It only required a leader with a self-employment background and a solid set of gonads. There are millions of us across America who could see this big picture before the trade policy was implemented.

Also good news, if only for GDP bean-counters: imports declined, decreasing by $0.4 billion, or 0.2%, in April to $257.4 billion. Imports of goods decreased $0.7 billion and imports of services decreased $0.3 billion.

Finally, to help Trump make his economic case even stronger, the US deficit excluding petroleum products: after hitting a record in February, continued its dramatic improvement in April, suggesting that whatever Trump is doing to boost overall trade (we already know US petroleum exports are soaring), may be working, as it shrank from over $50BN in February to just $41BN in April.

And now, we expect even more upward revisions to Q2 GDP, which according to the Atlanta Fed will now likely print above 5.0%