Trump dominates March 15 primaries. The voters are watching, GOP. Will you get behind the people’s choice or commit Republicide?

Watching the 2016 GOP presidential primary process unfold, I remain struck by the rich Shakespearean metaphors, which are very interesting and even frightening in a premonitory sort of way.

Like Julius Caesar in the Shakespeare masterpiece, a popular leader is being anointed by the people, while his once-ally and close friend, fearful of his power, and wanting the crown for himself, conspires with other senators to destroy him.

Thus it is with the Republican Party’s new leader, Donald Trump, and his former pal and (coincidentally) senator, Ted Cruz, who conspired with his fellow presidential candidates to take down The Donald.

Notwithstanding the striking coincidences, I am hopeful of a happier ending to the modern edition of this story.

Donald Trump, a virtual stranger, walked into the GOP establishment one day and quickly became the life of the party. With the backing of the people, he is intent upon rebuilding the Republican Party from the parasitic, out of touch, do-nothing waste of human flesh it is today, to a lean and efficient organization much closer to the people. Noble mission, to be sure, but he can actually do it! He has a lifelong history of doing exactly what he says he is going to do.

The only obstacle in the way is Ted Cruz. Once the sole defender of Donald Trump, Cruz is now allied with the opposition, the GOP, which is busy signing its own death certificate. Cruz still mistakenly believes he has a chance of securing the Republican nomination.

He doesn’t. He is being used by the GOP to steal votes from Trump to prevent him from reaching a first ballot majority of delegates and forcing a contested convention. The GOP is more likely to nominate Khalid Sheikh Mohammed than Ted Cruz.

Trump will certainly finish with a plurality of delegates, but may not reach a majority, due to Cruz’s stubborn opposition and misplaced hope.

The plot thickens. More sleight of hand and clever deception is underway by the GOP. Their groomed and preferred candidate, Marco Rubio, having crashed and burned, has been dropped off at the landfill by the Grand Old Parasites. Enter the new wonder boy, a candidate so establishment he votes with Democrats.

Paul Ryan is warming up in the bullpen, the GOP praying that Cruz can prevent Trump from reaching the magic number of 1,237 delegates, that they might exploit a contested convention, choosing neither Trump nor Cruz, anointing Paul Ryan instead.

This is how out of touch the GOP is. Since selling his soul to Barack Hussein by approving his odious and bloated budget, Paul Ryan has become persona non grata amongst grass roots conservatives. Nominating Paul Ryan will be suicide for the Republican Party. He will be the GOP’s last breath, Hitlery will become president, and she will lead the entire country off a cliff. And we thought Barack Hussein was corrupt and incompetent. Ha! We ain’t seen nothing yet!

Now, here is my hopeful happy ending to this bizarre story. Either Trump gains the 1,237 necessary delegates to win the nomination outright, which is preferable, or, in the case of a contested convention, he and Cruz become confederates once again. There will be no stopping this combination. Trump gets the nomination, Ted Cruz becomes his running mate, and they destroy Hitlery at the polls in November. Who knows, they may have engineered this deal from the beginning. They are geniuses if they did.

This scenario sets Cruz up perfectly to be heir apparent in 2024, when he will be a still young (by presidential standards) 53 years old. This will also give the team time to resolve Cruz’s eligibility,which is questionable.

From the beginning of this circus we call the nominee selection process I have been saying that the establishment GOP has been handed a gift in the uber-popular person and charismatic personality of Donald Trump. All they have to do is get behind the people’s choice and enjoy the glorious ride all the way to the White House. I reckon they prefer Republicide. 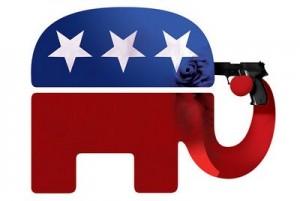 Veteran GOP strategist Mark McKinnon told Breitbart News Daily that the rise of Donald Trump in the 2016 election reflects the fact that for years, the Republican Party “has had no clear vision of the future.” The GOP establishment, he said, “soaked the place in kerosene. All Donald Trump did was light a match.” In this election, “the Republicans are just going to have to burn the house down and rebuild it.”

McKinnon is the co-creator, co-executive producer, and co-host of the Showtime docu-series The Circus, which chronicles the 2016 presidential race.

He spoke with SiriusXM host and Breitbart News executive chairman Stephen K. Bannon about a scene in the episode called “The Reckoning” showing a group of six GOPestablishment figures gathered at a private dinner to lament the rise of Donald Trump and discuss what can be done to defeat him.

McKinnon said this particular scene “has lit up the boards like no other scene we’ve done the whole season.”

“Old white warhorses,” Bannon laughed. “It’s literally like a smoke-filled room out of something like Tammany Hall.”

“It sounded like you were dropping into a mafia don mob boss meeting, right?” McKinnon joked.

From the candid conversation among these six men, “a couple things were clear,” McKinnon said. “First of all, there really is no coherent establishment, and to the extent there is an establishment, they have no clue how to deal with Donald Trump.”

“You look at the scene, and it’s pretty much an ad for Donald Trump,” he said. “The Trump people see that and say, ‘Well, that’s exactly why we’re supporting Donald Trump.’”

Bannon remarked on how shocking it was that despite having access to the commentariat, the consultants, the K Street lobbyists, and the massive donor money that all comprise the establishment apparatus, these figures still had no cohesive plan to “counter a populist uprising.”

McKinnon agreed, “There was not a coherent notion at all about what to do. In fact, there were very divergent notions.”

McKinnon recalled that one of the establishment figures in the scene admitted that Trump “had a better finger on the pulse of what the American voter wants” than any of the six of them in that room.

“The one thing I’ve said from the very beginning of this election is that it’s very likely that the Republicans are just going to have to burn the house down and rebuild it,” McKinnon said. “And, you know, they soaked the place in kerosene. All Donald Trump did was light a match, and the place is going up in flames.”

He explained, “The Republican Party, not just for this election cycle, but for a long time, has had no clear vision of the future, and occasionally democracy rises up and takes a hold of the reins, and that’s what’s happening in this election. The voters are saying, ‘Listen, you guys don’t have a clue. So, we’re going to give you one.’”