With all the talk and threats of tariffs, it is interesting that our trade partners don’t seem to understand that they have no leverage or choice

PREMISE: The most valuable thing in recorded time is the American consumer market. It is worth $20 trillion a year and we have been giving it away for free.

The Trump card in the trade war currently underway between the United States and its trade partners is the US consumer market. Our elected leaders over the past several decades have given it away for free to once-third world countries that couldn’t care less about us, stealing American jobs and greatly damaging the US manufacturing base with their cheap labor.

Now that We the People are enjoying the good fortune of having a patriot in the White House who clearly understands the current “free trade” dynamic and its injurious effect on the American people and their economy, our trade partners are singing the blues over President Trump’s tariff threats.

Ross Perot, who was responsible for Slick Willie being elected president, nailed it in 1992. Like President Trump, Perot was and is an astute businessman, even at nearly 90 years old. In 1992, Perot warned America about the stupidity of NAFTA, a globalist wet dream bound to steal American jobs by exploiting cheap offshore labor, especially in Mexico.

Perot’s famous and prophetic quote in regard to NAFTA rings true today: “That giant sucking sound you hear coming from the south is American jobs going to Mexico.”

Several countries, Mexico and China most notable recently, are under the impression that they have a right to callously damage the US economy, and, in the process, make our wealth their own. Finally, we have a president who is ensuring those countries that their access to the American consumer market is not a right, it is a privilege, and a privilege that can be taken away at any point.

Mexico is the most recent example of this entitlement belief by a trade partner. Simply using access to the US consumer market as leverage to force Mexico to stop the massive numbers of Central Americans who are entering Mexico illegally, en route to the United States, President Trump is pressuring Mexico to stop the flow of migrants at its border with Guatemala and/or within their own borders instead of allowing them to enter the United States, where the numbers of those seeking asylum are so overwhelming that most cases cannot be adjudicated in the time permitted by law and they are released into the country, never to appear (in most cases) for their asylum hearings. I have wondered if it is not possible to place electronic bracelets on the migrants so that they can be picked up and forced to attend their hearings. I can only presume that it is not possible for whatever reason or this would be happening.

Mexican leaders are actually resisting President Trump’s tariff plans, which could result in economic suicide for our southern neighbor.

Rather than vowing to stop Central American migrants from simply waltzing across their border, Mexico’s leadership believes they can do nothing about the serious migrant problem AND enjoy continued free access to the American consumer market.

Wisely, President Trump is using the greatest leverage at his disposal to alter the behavior and policy of the Mexican leaders. Empty threats and doomsday predictions are all the Mexican government can come up with. They don’t seem to know what President Trump knows – that they have no leverage! They have no choice.

Clearly, in an attempt to frighten the American people into pressuring President Trump to abandon his tariff threat, Mexican President Andres Manuel Lopez Obrador and other Mexican leaders have embarked on a fear campaign, insisting that any US import tariff against Mexico will result in higher prices for consumer goods for Americans and will damage the US economy.

The argument I continue to hear from supposedly well-educated economists is that the tariffs will be placed on the backs of American consumers. Not true! Americans will certainly pay more for products imported from Mexico, but Mexico will be paying for that. Here is how that works. Suppose Mexican importers pay $500 million this year in tariffs which equals the rise in prices of Mexican imports. That $500 million can be given back to American consumers in the form of reduced taxes, making the tariff a wash for Mom and Pop America, but not for Mexican importers, who will bear the weight of the tariff.

U.S. Commerce Secretary Wilbur Ross met Monday with Mexican Economy Minister Graciela Marquez. After the meeting, Marquez told reporters that “her team is assessing potential reprisals” in response to President Trump’s plan to impose the tariff. “We will have to make a strategic plan to take into consideration many elements,” Marquez declared.

And, who is screaming the loudest over President Trump’s tariff plans? American auto manufacturers making cars in Mexico because they can make more money by screwing American workers and giving their jobs to Mexicans. If I were president, I would triple the tariff for those greedy manufacturers who abandoned the American people long ago but believe they are still entitled to free access to America’s consumer market.

What would you expect to be the #1 industry in Mexico? Oil? Tourism? Mining? No, it is automobile manufacturing. And, none of those manufacturers are Mexican. American, European, and Asian automakers all manufacture automobiles and/or auto parts in Mexico for one reason – Mexico’s proximity to the American consumer market. 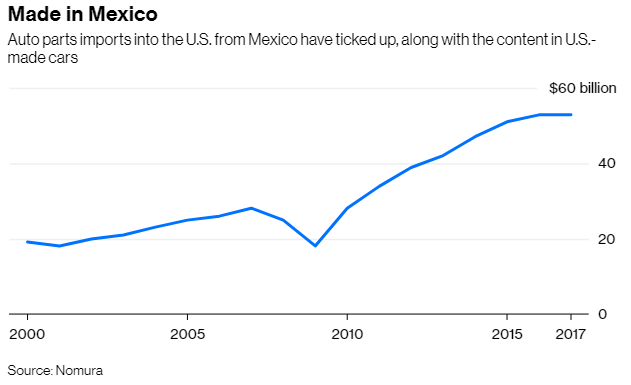 President Trump warned American manufacturers as early as June 2015, from the very beginning of his 2016 presidential campaign, that tariffs would be a part of his trade strategy, and his two primary targets were China and Mexico.

When Mick Mulvaney, the acting White House chief of staff, was asked on Fox News Sunday if the president is serious about the tariffs on Mexico, Mulvaney replied, “deadly serious.”

Those manufacturers who remain in Mexico must have thought that President Trump didn’t have the cojones to impose tariffs, or maybe they thought his threats were no more than bluster.

Whatever the reason, American auto manufacturers building cars in Mexico stand to suffer the most. It will likely be difficult for them to compete with automakers manufacturing in the US.

I have only two words for those traitors who take jobs from Americans and give them to Mexicans or any foreigners, and who then feel entitled to sell those cars back to the very same people whose economy they injured by moving their jobs to Mexico. The first word begins with an ‘F’, the second word ends with a ‘U’.

I am not a new fan of tariffs. I have supported import tariffs as a means to benefit our economy for decades. Two of my articles on tariffs can be found HERE and HERE.