Latest CNN/ORC poll has Donald Trump leading Hitlery by five points. Is this a blip or a trend?

Oops! Somewhere Hitlery is chucking her Salvatore Ferragamos at her campaign manager. She is rapidly becoming the most beatable candidate in the history of time, but it isn’t Robby Mook’s fault. Hitlery will find the culprit in her mirror.

Like Wile E. Coyote, Hitlery screws up everything, every time. One can suffer the old anvil-on-the-skull misfortune only so many times before succumbing to the inevitable.

In CNN/ORC’s latest presidential poll, released this morning, Donald Trump leads the the Wicked Witch of Benghazi by five points in a four-way race.

This may be the beginning of the end for Hitlery. If this trend continues until November, Monica Lewinsky’s ex-boyfriend’s wife has much to fear, like spending the rest of her life in a cage, which was my contention all along as to why the FBI and GOP didn’t push for charges on Hitlery. They want to do it themselves AFTER January 20, 2017, when there is a new sheriff in town and an ethical Attorney General. If Hitlery had been charged now and acquitted by the uber-corrupt actors in the Hussein administration, or even if she had been convicted and sentenced in time for Barack Hussein to pardon her, then she would have escaped justice again and could not be recharged. 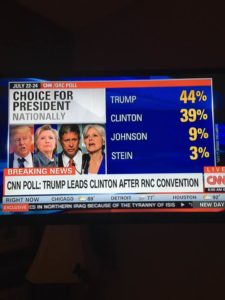 From The Daily Wire

If Donald Trump becomes president, Hillary Clinton will have only herself to blame. The latest CNN/ORC poll shows Trump jumping to a five-point lead against her in a five-way race, with Trump at 44 percent and Hillary at 39 percent. Trump is now ahead among independents, 46 percent to 28 percent; before the convention, he was behind 34 percent to 31 percent. Hillary has a 44 percent to 39 percent advantage against Trump among college voters, but he’s ahead among non-college educated white voters by a stunning 62 percent to 23 percent margin. 46 percent of Americans now have a positive view of Trump, an increase of seven points; 52 percent say Trump is running for the good of the country rather than personal gain, as opposed to 44 percent for Hillary; 43 percent say that Trump is honest and trustworthy, and most importantly, 46 percent of Americans say that Trump understands the problems they face in their daily lives.

Her wild political incompetence is now on full display for the entire American public to see. In the last week, she’s made five crucial errors that demonstrate just how terrible she is at the game of politics.

Portraying Trump As “Dark.” Last week, Donald Trump gave an RNC speech in which he focused on America’s problems in unsparing detail. And Hillary and her campaign – accompanied by the media – promptly brushed off those problems as exaggerated. The media universally labeled Trump’s speech “dark” and Hillary’s team began suggesting that America isn’t in particularly dire trouble. That’s incredible incompetence. People obviously feel that America has problems – the polls show that nearly 7 in 10 Americans believe we’re moving in the wrong direction. Hillary’s out of touch – she hasn’t driven a car since the mid-1990s – so naturally, she thinks things are hunky dory.

Picking Tim Kaine. Picking Tim Kaine didn’t change the narrative one iota. It looked like a safe pick for a candidate who thinks she’s ahead. Contrary to conventional wisdom, vice presidential picks don’t in any way guarantee their home states to their running mates. And Tim Kaine is perhaps the most boring pick Hillary could make – at a time when even her old boss, Barack Obama, is saying on national television that Hillary Clinton isn’t the most rousing speaker. Ouch.

Playing The Victim. On Sunday, the following words exited Hillary Clinton’s mouth: “I often feel like there’s the Hillary standard and then there’s the standard for everybody else.” Yes, yes there is. Americans know it. And Hillary doesn’t. She thinks she’s been treated unfairly by life. Americans will never stop laughing at her arrogance.

Brushing Off The DNC Scandal. Hillary’s main job at this convention is to unify her party after a brutal primary with Bernie Sanders. So she led off the convention by completely ignoring the DNC WikiLeaks scandal – she went on 60 Minutes and said she hadn’t seen any of the emails, and then Kaine said that lots of people at the DNC have opinions about the candidates. This is absolutely tone deaf. Even more tone deaf: her statement about the resignation of Debbie Wasserman Schultz as the head of the DNC – she simply praised Wasserman Schultz and said she looked forward to continuing to work with her on her campaign. Naturally, this has not quieted the Bernie Bros.

Blaming The Russians. The Hillary campaign has essentially blamed the Russians for leaking the DNC emails – and they’ve said that the Russians did it on behalf of Donald Trump. That may very well be true. But it looks paranoid, and it looks like blame-shifting for a scandal that’s entirely internal to the DNC. At a time when Hillary wants to project stability, she’s failing utterly to do that.

And so Hillary’s in trouble. She may recover with a small bump from the convention this week, but events outside her control keep throwing her incompetence and corruption into sharp relief. And that’s a serious problem for a candidate nobody wants to see in the light of day.