Donald Trump will win in a landslide today. Here is why….

If the visible support enjoyed by Donald Trump is any indication, then this election will be a deep red landslide. From social media following to crowd size and enthusiasm, Trump appears to be miles ahead.

However, the talking heads in the media and the major polling organizations tell a completely different story, a story of a distinct advantage for the Wicked Witch of Benghazi, which makes me not only question their analytical skills, but also wonder what they have been smoking.

The following electoral map is from Realclearpolitics.com, reflecting an average of the most recent major polls. It shows an advantage of 203 to 164 “safe states” (dark blue vs. dark red) for Monica Lewinsky’s ex-boyfriend’s wife. 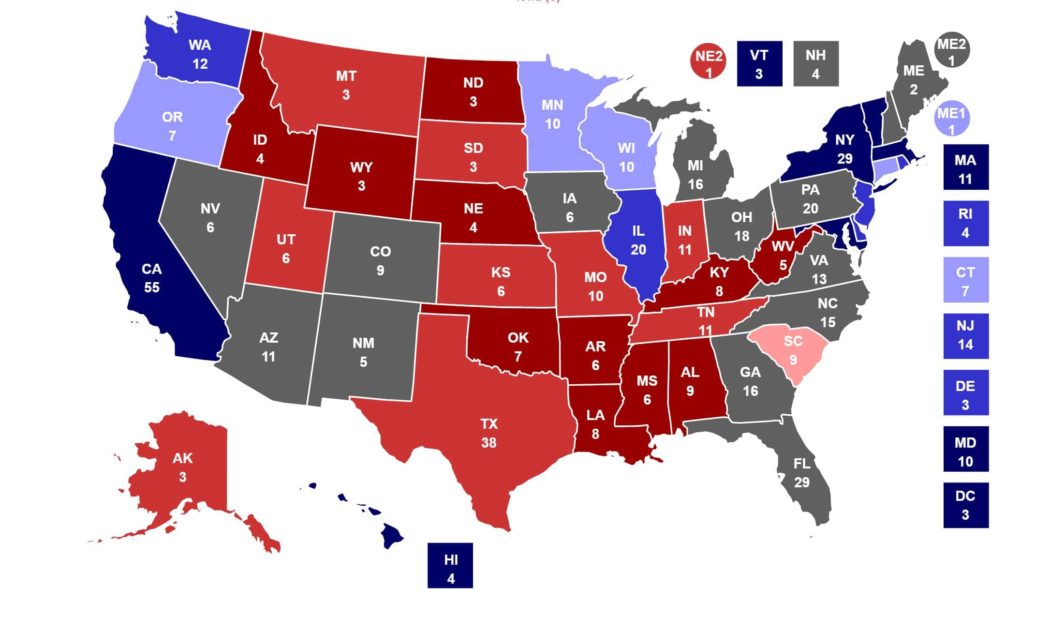 A pretty depressing picture if you are a Trump fan, and I am, but no different than the garbage we have been fed from Day One. While the map looks considerably more red than blue, those are all single-digit states, with the exception of Texas, whereas nearly all of the blue states are double-digit states including elector-rich California.

Here is where RCP and the major polls are wrong. The gray “toss-up” states, most of which are double-digit states, have been moving Trumpish for the past two weeks, especially the blue-collar Rust Belt states of Michigan, Ohio and Pennsylvania, where an overwhelming Trump victory will be secured.

Excepting the Democrat Party favorite pastime, election fraud, I see no way The Donald loses Florida, Georgia, and the Rust Belt states of Michigan, Ohio, and Pennsylvania. I believe he will also win Virginia and North Carolina, as well as Arizona, Colorado, and Nevada, taking Trump easily over 300 electoral votes, well past the 270 required to win.

Statespoll.com, via American Lookout, sees the same picture I have been seeing. There are several key factors that the pollsters are ignoring, both generally and in regard to the toss-up states….

The pollsters say those (gray) states are a toss-up. But they’re wrong.

I would add that the white vote, historically 3/4 of the electorate, will be off the charts in turnout, and re-emphasize #3, above. There is going to be a YUGE crossover bloc of Democrats voting for The Donald, many of them black voters who now recognize the lies the Democrat Party has been telling them for five decades, keeping much of the black community on the plantation of dependency. No more! I am so proud and encouraged to see this. Unity at last!

Statespoll.com has gone state-by-state and adjusted the polls for these factors. Each day, they publish realistic numbers for key states.

Here are the latest results for key states (click on the adjusted numbers to see the analysis for each state): 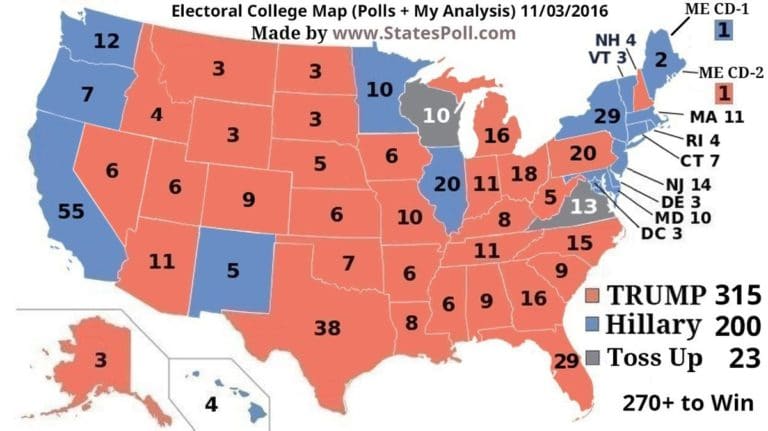 I also see a good chance that Trump will win his home state of New York (call me crazy), which is considered a cinch for Hitlery. New York has not voted Republican in a presidential election since Ronald Reagan’s reelection thirty-two years ago.