VIDEO: After assessing several locations for the historic Trump/Kim Jong-un meeting, the exact spot has been confirmed

It is hard to describe in words alone the monumentally historic events that are occurring today in North and South Korea in regard to the peace and unity the two formerly hostile neighbors have agreed to and are intent upon making permanent.

South Korean President Moon Jae-in is giving the credit for this historic and world-changing (for the better) reunification to President Trump, who, indeed, deserves much of the credit, but not all of it.

As with the Reagan/Gorbachev alliance that dismantled the old, stale, communist Soviet Union which Gorbachev deserves much credit for, so too does Kim Jong-un deserve much credit for this peaceful and joyous reunification of the Korean peninsula.

Unlike his ideologically blind father and grandfather, Kim Jong-un understands that there is a better way, for him, for his people, and for the new Korea. He has watched the Chinese experiment with capitalism blossom and perhaps sees the same potential in his own country, and, indeed, that is very likely.

The location for the historic meeting between Kim Jong-un and President Trump is now confirmed to take place in the DMZ dividing North and South Korea. When you think about it, what other location could even be considered?

Moon and Kim met at the same location in Panmunjom last Friday, a historically significant event that was televised worldwide and led to an agreement to denuclearize the Korean Peninsula and formally end the Korean War.

There is a “strong possibility” the summit will be held at the site, with some events possibly scheduled on the northern side of the military demarcation line separating the two countries, according to an official with deep knowledge of North Korea’s thinking on the matter. 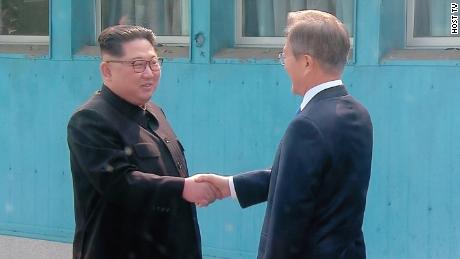 The venue makes the most sense logistically for Kim, the source said, because media facilities and equipment are already in place, which could allow the summit to take place “in late May.”

Traveling to the northern side of the demilitarized zone (DMZ) would also provide a historic opportunity for Trump, the source said, adding that Moon may be involved in the summit in some capacity.

A spokesperson for the South Korean president appeared to endorse the venue choice when asked about the proposal, Tuesday.

“(We) think Panmunjom is quite meaningful as a place to erode the divide and establish a new milestone for peace,” the spokesperson told reporters. “Wouldn’t Panmunjom be the most symbolic place?”

Donald Trump will become a hero for taming the global menace that was North Korea. So, too, will Kim Jong-un become a hero, both among his people and globally.

I haven’t reported yet what I suspect President had to offer Kim Jong-un to pull off this history-changing “deal.” But, I can guarantee you it was worth it. Everyone’s a winner!

Made for TV moment

The idea of meeting at the DMZ wasn’t a complete surprise to Trump’s aides, since the president has been talking about it all weekend and raised it in his Sunday phone call with Moon, a senior US official and a person familiar with the conversations told CNN.

Trump loved the images from the inter-Korean summit and the fact the entire meeting was televised, those sources said.

Speaking to reporters Monday, Trump said he was enthusiastic about the idea of holding the summit in the DMZ. “There’s something I like about it, because you’re there, if things work out, there’s a great celebration to be had on the site, not in a third party country,” he said.

Millions watched Moon’s meeting with Kim last Friday, the first meeting between two leaders of North and South Korea in a decade.

Cameras followed the leaders’ movements throughout the day, from Moon’s departure from Seoul to the moment Kim crossed the demarcation line into the South — and encouraged Moon to cross to the North.

The US President wants to be involved in similar scenes when he becomes the first sitting US President to meet a North Korean leader, the source said. He’s keen to take part in a cross-border handshake, but also wants photos to document the moment if he decides to stand up and walk out of talks, added the source.

WATCH: Nurses Tell Pregnant Woman That Her Baby Is ‘Not Her Property’ And WILL Have COVID Test After Birth
Clash Daily