Oops! Donald Trump is now tied, and rising, in the only state that was really a threat – Canadian Cruz’s home state of Texas

Excerpted from an article by Jason Whitely, WFAA

DALLAS – Six days before Super Tuesday, Ted Cruz and Donald Trump are now tied in Texas, according to a new public opinion poll commissioned by WFAA-TV.

Cruz and Trump both had 32 percent support from likely and actual GOP primary voters, with a 3.9 percent margin of error.

It is the most recent survey of Texas voters and the first one to show Cruz no longer leading in his home state.

(Photo: WFAA)
take our poll - story continues below
Completing this poll grants you access to Powdered Wig Society updates free of charge. You may opt out at anytime. You also agree to this site's Privacy Policy and Terms of Use.

“He’s fading,” said Cal Jillson, professor of political science at Southern Methodist University, of Ted Cruz’s candidacy. “Trump has proven to be stronger and more resilient than anyone expected.”

Marco Rubio is a distant third in the WFAA Texas TEGNA poll with 17 percent, John Kasich has 6 percent, Ben Carson has 5 percent and another 5 percent of respondents remain undecided, the poll revealed.

Cruz has a wide lead over Trump among Texas evangelicals, 42 percent to 28 percent.

The senator overwhelmingly leads Trump among those who are members of the tea party, 62 percent to 21 percent.

But Trump leads by 16 points among Republican voters who identified themselves as moderate and by 14 points among non-evangelical voters. 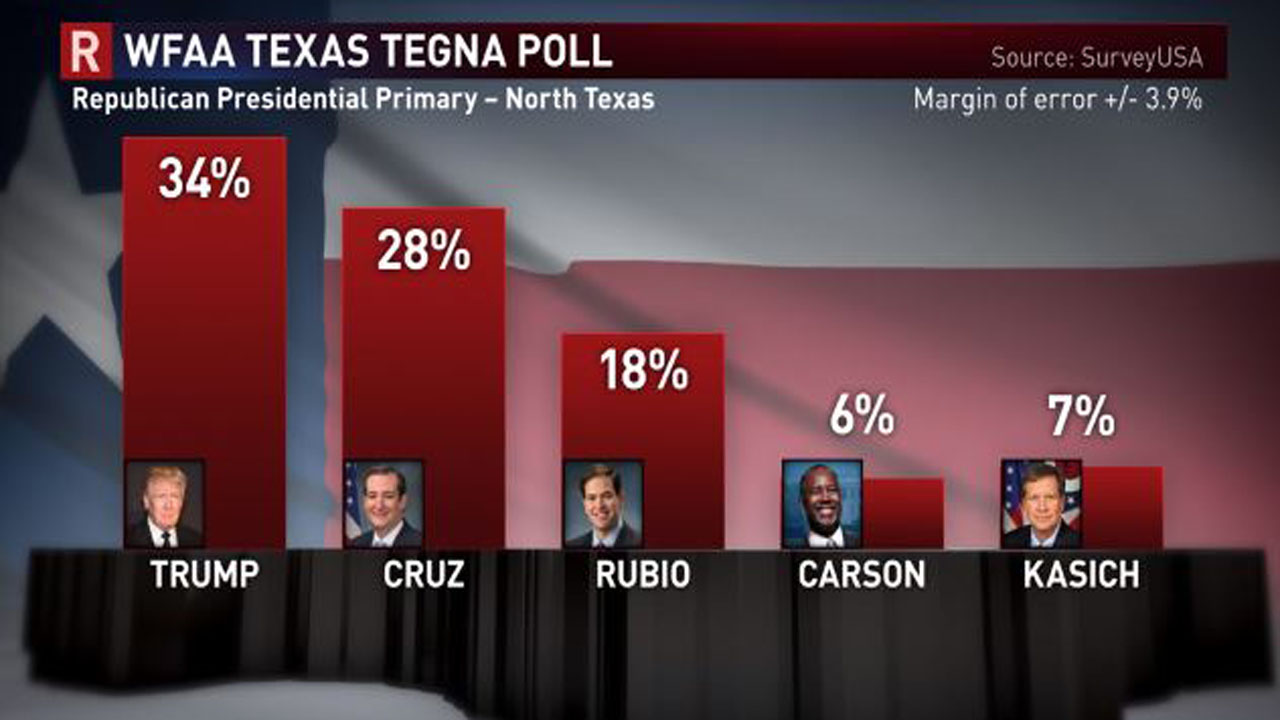 They are also virtually tied among men and women, younger voters and older voters, gun owners and non-gun owners and college-educated voters.

Last month, Cruz defied polls and placed first in Iowa but the Texas Senator has yet to duplicate that win in any other contest. Trump won in New Hampshire, South Carolina and Nevada and remains the national frontrunner. Cruz finished third in each of those races.

“Trump has clearly gained momentum out of South Carolina and Nevada. As he continues to win he continues to look more and more like the most likely nominee,” said Matt Mackowiak, Republican consultant and owner of Potomac Strategy Group. “I would caution to remind people that we had six full days of early voting before South Carolina. In spite of your poll, the Texas Tribune poll and Emerson survey (which showed Cruz with a one point lead), I still would be very, very surprised if Cruz does not win Texas.”

But Jillson said the WFAA Texas TEGNA poll offers a dim view of Cruz’s future in the 2016 race.

“If he is beaten in Texas that means he is beaten across the SEC primary (Super Tuesday),” Jillson explained. “Cruz exudes a determination that sort of borders on the frantic. He is deeply supported by the true believers. But once you get beyond that slice of the electorate people have a natural concern about Cruz and his approach to the campaign and his willingness to play dirty tricks. Those charges have stuck to him because he has a lean and hungry look that worries people. Trump is showing real resilience and even increasing his support and Rubio is becoming the alternative. That doesn’t leave much of a lane for Cruz.”

“If Trump were to somehow win Texas that would be a mortal blow for Cruz and make it difficult for him to move forward in the other states,” Mackowiak added.