Here is the TRUTH! Trump has “a commanding lead!” 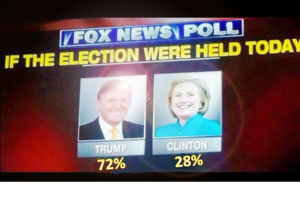 More proof that the usual suspect pollsters are so many steaming piles of liberal lies. Liberals pay the polling organizations to lie, so they lie, in an effort to manipulate public opinion, attempting to sway the election their way. Often it works.

This time around, however, may be a different case. They never expected the Trump phenomenon to be so overwhelming. I believe it is insurmountable, discounting voter fraud, which will have to be so massive it will be obvious and provable.

Following the conventions, a pattern has emerged from the polling: Donald Trump has taken a commanding lead in all demographics. From the well to poorly educated and even out-performing Romney among women and Hispanics. According polling aggregates the only demographic Hillary is winning is African American single women and White College Males with advanced degrees in Social Sciences.

We spoke to a source who works at Nate Silver’s political advocacy group fivethirtyeight.com.

RealTrueNews: “Is it fair to say that Silver is worried?”

538 Source: “In a panic. Our business model is predicated on making liberals feel better about the election. Right now? It’s a disaster.”

538: “Well, we’re changing the model for starters. There were a few hours when the server was showing the real projections and while traffic was pretty high, let me tell you, it was a melt-down politically.”

538: “Well, Nate’s a liberal. No secret there. When he saw what was happening he flipped out. Had us look for bugs–something gone wrong–looking at the feeds. Of course nothing was wrong. Nothing had changed. Then he got on the phone with his people embedded with Q-Pac and Survey Monkey and PPP and all those guys–“

538: “Huh? Oh, yeah–it’s a big social club. The pollsters all work together. We have a Slack-room that’s sharing all kinds of results and skews and all that. That’s how we keep it all orderly.”

RTN: “But what about on election day?”

538: “Oh–we drive it. You set the expectations ahead of time. It’s called pre-loading. You’d be surprised how we can fine-tune things. Mass belief is powerful. The problem here is (a) not everyone plays nice. Fox is rogue. Rasumssen was . . . bad. They were doing real polling. Also, there’s like a game of chicken. At the start of the cycle we do real polling so that everyone knows how they better buy in. This time . . . Trump just caught us by surprise. The impact was so big–it came on so fast–Hillary just collapsed.”

538: “I don’t know, man. There are a bunch of smaller groups out there doing real polls. I don’t know if anyone can keep this under wraps. They had to talk Silver off the edge of the building yesterday. It was bad.”

RTN: “He was literally going to throw himself out a window?”

538: “Yeah–he was–well, but we’re on the second floor. He was just really pissed. I mean, he got a call from the White House telling him to fix it and shit.”