When your closest friends lose hope in your endeavor, it is time to take a long look in the mirror. Are you listening, Marco?

The cold, hard reality of the inevitable is settling in at the Rubio camp. Down by 23 points in the latest GOP presidential polling (March 8-11) from Florida Atlantic University, Rubio must certainly consider giving up the fight if he does as poorly as expected on Tuesday in his home state.

Longtime friend of Florida’s junior senator, Al Cardenas, who is Rubio’s former boss and mentor, has morally surrendered to the irresistible force that is Donald Trump, who has led in the Florida polling for months and currently leads Rubio 44% to 21%, just a few days ahead of Tuesday’s primary, where the winner is awarded all 99 of the Sunshine State’s delegates. I wonder if Marco has considered Cuba. 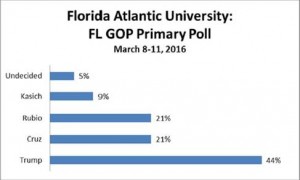 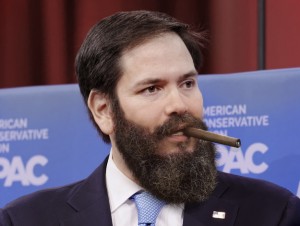 With Marco Rubio trailing Donald Trump by 23 points in the latest Fox News Florida poll, the former chairman of the state’s Republican Party has declared the Senator’s campaign is “pretty much finished.”

Rubio is making a last stand in Florida, but many of his closest supporters have told The Washington Post they have little doubt the GOP’s once rising star will likely lose in his home state to Trump.

“It’s certainly a possibility that he could lose on Tuesday, and perhaps by double digits,” John McKager “Mac” Stipano­vich, a Tallahassee lobbyist and Rubio supporter told the Post.

On Wednesday night, Rubio and his wife held a rally at a local football stadium in Hialeah. Members of the press quickly tweeted out photos of Rubio addressing a near empty stadium.

“Those exchanges with Mr. Trump were damaging,” Al Cardenas, the former head of the state’s GOP and longtime chairman of the American Conservative Union, which hosts the Conservative Political Action Conference each year, said of Rubio’s personal attacks on the billionaire front-runner.

Cardenas hired the young Rubio as a lawyer in his influential Miami firm. Now, Cardenas sees little hope for a Rubio comeback.

He suggests that the Rubio attacks on Trump have not been “as damaging as the dismal results [Rubio has shown] in Kansas, Maine, and Louisiana. If you finish under 20 percent in the South, Midwest and Northeast, this far out in the campaign, you are pretty much finished.”

Rubio’s campaign had long suggested it had a “Florida strategy” — to lose in almost all other primaries and caucuses but win in delegate-rich Florida’s winner-take-all primary. Rubio, they said, would emerge as the candidate of both the GOP establishment and the “anybody but Trump” conservatives.

But Rubio seems to have done little to implement such a strategy. According to MSNBC, Rubio opened a campaign office in the state only a month ago. Trump, meanwhile, has had field offices in Florida since November.

And, despite raising $84.6 million of his campaign and Super PACs by late February, Rubio began airing ads in his home state just a few days ago.

Rubio’s campaign says he is spending the final days attending a series of fundraisers throughout the state.

A top Republican strategist who supports Rubio expressed frustration to Newsmax. “Why is he spending time now raising money for a campaign that’s almost over. He won’t be able to deploy those funds before Tuesday. He should be out campaigning for every last vote.”

Another Rubio friend told the Post that the attacks on Trump backfired.

“Up until he started talking about how Trump has a small penis, it was brilliant,” he said. “Focusing on the size of his hands or the color of his skin — that was stupid.”

“Beyond the appeal of his personal story, I’m not sure Marco ever grew a constituency that would carry him to the finish line,” Stipanovich told the Washington Post.

Despite having the backing of the party’s wealthiest donors and the overt support of Fox News, Rubio looks like he will lose Tuesday.