UN sending thousands of Muslims to US. Resettlement will cost American taxpayers billions of dollars

The federal government is preparing for another “surge” in refugees and this time they won’t be coming illegally from Central America.

The U.S. State Department announced this week that the first major contingent of Syrian refugees, 9,000 of them, have been hand-selected by the United Nations for resettlement into communities across the United States.

The announcement came Tuesday on the State Department’s website.

Like the reporting you see here? Sign up for free news alerts from WND.com, America’s independent news network.

WND reported in September that Syrians would make up the next big wave of Muslim refugees coming to the U.S., as resettlement agencies were lobbying for the U.S. to accept at least 75,000 Syrian refugees over the next five years.

Until now, the U.S. had accepted only 300 of the more than 3.2 million refugees created by the Syrian civil war in which ISIS, El Nusra and other Sunni Muslim jihadist rebels are locked in a protracted battle with the Shiite regime of Bashar al-Assad.

But the U.S. government has been the most active of all nations in accepting Islamic refugees from other war-torn countries, such as Iraq, Somalia and the Democratic Republic of Congo.

The State Department announcement makes it clear that the 9,000 refugees represent just the beginning of an extended program to accept more Syrians.

“The United States accepts the majority of all UNHCR referrals from around the world. Last year, we reached our goal of resettling nearly 70,000 refugees from nearly 70 countries. And we plan to lead in resettling Syrians as well,” the statement reads. “We are reviewing some 9,000 recent UNHCR referrals from Syria. We are receiving roughly a thousand new ones each month, and we expect admissions from Syria to surge in 2015 and beyond.”

The United States, with its commitment to accepting 70,000 displaced people a year, absorbs more refugees than all other countries combined. This number is understated, however, as once refugees get to the United States they are placed on a fast track to citizenship and are able to get their extended families to join them in the states under the government’s Refuge Family Reunification program.

The State Department works to place refugees in 180 cities across 49 states.

Despite the large numbers, the U.S. has come under criticism from aid groups for its pace in taking in refugees from the Syrian war, which is by far the largest refugee crisis of recent years, reported Ann Corcoran of Refugee Resettlement Watch.

U.S. officials say the resettlement program has moved slowly because the United Nations refugee agency, which they look to for referrals, didn’t begin making recommendations until late last year. And the United States takes 18 to 24 months on average to carefully vet each applicant to make sure he or she poses no security risk.

Muslim countries in the Middle East have so far not stepped up to permanently take in their Islamic brothers and sisters although the temporary refugee camps to which the Syrians have fled are in Jordan, Turkey and Lebanon. 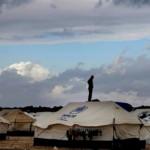 Syrian refugee camps like this one have popped up in Jordan and Lebanon.

It also would not take 18 to 24 months to “vet” Christian refugees for security purposes.

“There is no doubt the majority of Syrians to be admitted to the U.S. will be Muslims because it would be unlikely there would be a ‘security risk’ with the Christians,” according to Corcoran.
Read more….