Photo, above: Members of the Islamic State of Iraq and Syria, in Gaza. (Image source: ISIS YouTube video)

Let me get this straight. ISIS and Hamas are locked in a power struggle for Gaza. ISIS assassinates a Hamas leader. Hamas retaliates by killing an ISIS commander. ISIS retaliates again by sending rockets into Israel. Makes perfect sense.

As Islamist militants battle for territory that doesn’t belong to either one of them, Israel is again the victim. 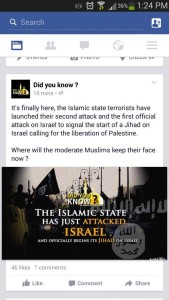 A new terrorist group in Gaza that claims to be part of the Islamic State launched three short-range rockets at southern Israel on Wednesday evening. The group, named “Sheikh Amir Hadad Brigades,” issued a statement after the attack in which it said it would continue to attack the Jews and jihad against Israel – whether or not Hamas approved – and that the next attack would come within hours.

That attack didn’t happen, perhaps because of the retaliation by the Israeli Air Force, which responded by bombing three military targets in Gaza in the early hours of Thursday morning.

The ISIS-affiliated group said the jihad against the Jews is a religious obligation, because they are the “enemies of Allah,” and that no one could stop them. The attack on Israel was an act of revenge for the killing of an Islamic State member in Gaza by Hamas, the group said.

As Western Journalism reported yesterday, the group had issued a 48-hour ultimatum demanding that Hamas stop its crackdown on the Islamic State and allow the group to attack Israel from Gaza. The same group claimed responsibility for last week’s rocket attack on the Israeli city of Gan Yavne, east of Ashdod.

Hamas, however, ignored the ultimatum and killed Younis al-Honnor, a local ISIS leader, in a shootout in Sheikh Radwan in the northern part of Gaza City yesterday. The man had booby trapped his house and Hamas later found suicide belts in the building.

Al-Honnor was later buried in the black flag of the Islamic State.

Hamas started its crackdown on Islamic State terrorist cells in Gaza after the assassination of top Hamas commander Saber Siam on Sunday by another ISIS-affiliated group named the “Army of the Islamic State.”

Siam was killed, the group said, because he was “a partner in a declared war against religion and against Muslims, working for the heretical government in Gaza.”

ISIS in Gaza says Hamas is waging a war on religion in Gaza and must change its ways or face the consequences. The group also sent text messages warning Gaza residents to stay away from Hamas buildings and offices lest they die in new attacks against Hamas.