VIDEO: Sidney Blumenthal and MSM clowns are all outraged over a racist commercial they say Fred Trump ran in the 70s. The only problem is it is a lie, fake news!

More fake news from the greatest purveyors of fake news on the planet, the liberal assclowns in the Democrat Party, and their official communications bureau, the mainstream media, all in another attempt to paint President Trump and his family as racists.

The righteous indignation of the left over a video Sidney Blumenthal and the progressive toads who pass for journalists in Liberalville have been disseminating as real is beyond irresponsible. These people vet nothing! It would have been easy to discover where the video came from with a tiny bit of background work. But that would mess up a splendid opportunity to slam the president and his family, and we certainly can’t have that.

Many reporters were shocked this week after racially charged videos surfaced online purporting to be campaign ads created in 1969 for Fred Trump, the late father of President Trump.

This particular media feeding frenzy was set off by longtime Clinton confidant Sidney Blumenthal, who mentioned the videos in an essay published this week by the London Review of Books.

“In 1969, Fred Trump plotted to run for mayor of New York … He made two test television commercials. One of them, called ‘Dope Man’, featured a drug-addled black youth wandering the streets. ‘With four more years of John Lindsay,’ the narrator intoned, ‘he will be coming to your neighbourhood soon.’ The ad flashed to the anxious faces of two well-dressed white women. ‘Vote for Fred Trump. He’s for us.’

The other commercial, ‘Real New Yorkers’, showed scenes of ‘real’ people from across the city, all of them white. Fred Trump, the narrator said, ‘is a real New Yorker too’. In the end he didn’t run, but his campaign themes were bequeathed to his son.

Soon after Blumenthal’s essay appeared online this week, the videos he mentioned were widely shared on social media by reporters in various newsrooms. The Washington Post’s fact-checker, Glenn Kessler, was one of the first to circulate the videos on Twitter, and his note was shared by several of his colleagues.” 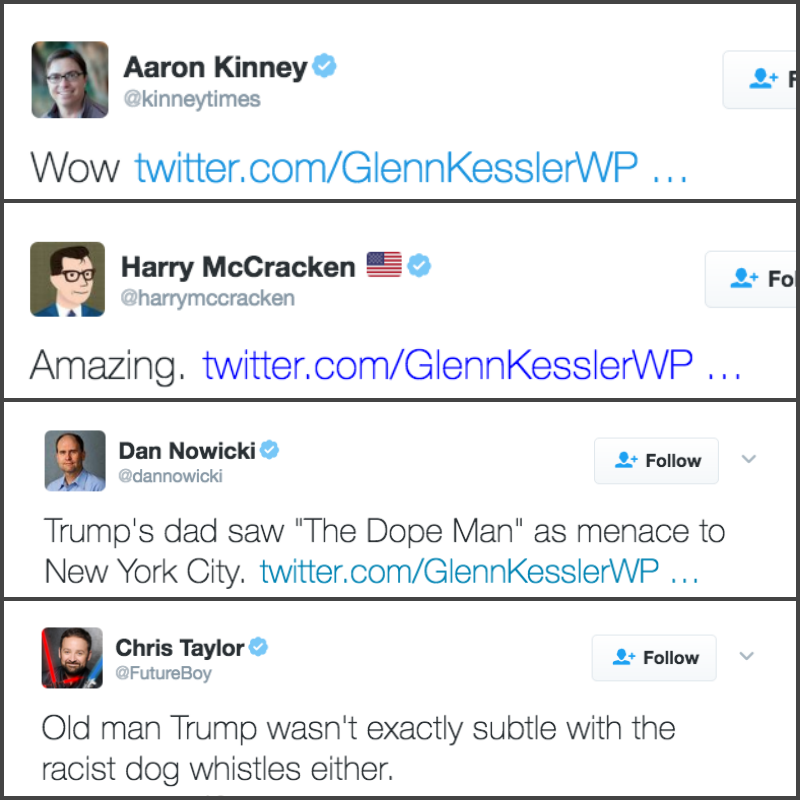 There is only one problem with the supposed Trump ads mentioned by Blumenthal: They’re fakes.

Fred Trump never ran for mayor in New York City, and he never had ads made up for his supposed campaign. It’s all fake.

The videos in question were created and published online last year by a group called “Historical Paroxysm,” which specializes in producing “found footage from alternate realities.”

The footage used in the group’s “Dope Man” ad, which ends with a banner reading, “Paid for by the Committee to Elect Frederick C. Trump,” is from a 1969 short film called “A Day in the Death of Donny B,” according to the Post.

Also, as noted by Gizmodo’s Matt Novak, U.S. political campaigns started adding the “paid for” disclaimer at the end of ads only very recently.

After Historical Paroxysm’s fake Trump ads went viral this week thanks to reporters and Blumenthal, the art project group removed the videos from their YouTube and Vimeo accounts with no explanation, Politico noted.

Several reporters, including Kessler, have also issued mea culpas admitting they were fooled by what they thought were authentic campaign ads from the early 1970s.

9 Signs That Chess Pieces Are Being Moved Into Place For A Major War In The Middle East
March 8th, 2021 Sons of Liberty Media

The COVID Vaccine Statistic The Media Has Been Under-reporting
March 8th, 2021 Clash Daily

The Next Event on the Prophetic Calendar
March 8th, 2021 TCP News
Contact us