Swedes revolt against the open-door Muslim immigration policy. They have burnt 17 refugee centers to the ground.

Photo, above: Arson: The tension in Tärnsjö, Sweden between local citizens and Muslim refugees is off the charts. Across Sweden, buildings which are earmarked to house asylum seekers are being set fire to at an alarming rate

I originally posted this story in early November, 2015.  At that time, Swedes were revolting against the liberal, unchecked Muslim immigration policy imposed by their elected leaders, burning nine refugee centers to the ground. By December 1, seventeen refugee centers had been torched.

To counter the arson attacks against refugee centers, Swedish authorities have begun building refugee housing in secret locations to avoid further problems with arson by locals who are not exactly rolling out the Welcome Wagon.

How could Swedish leaders, and leaders all over Europe for that matter, not be able to connect the dots between unlimited immigration from a backwards culture (Islam) and the crime, disease, and rape it clearly brings, not to mention the unbearable strain on their social welfare system?

Yet, most European leaders seem oblivious to the bitter fruit of their shameful, politically correct decisions, and stand by applauding as the Muslim invasion (immigration, my ass) continues to destroy the entire continent.

Rape by Muslim men is epidemic in Sweden, as made evident in the UN chart below. Statistics show that 1 in 4 Swedish women will be raped in her lifetime. 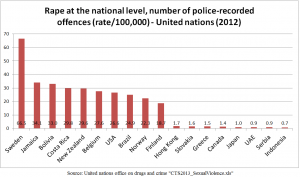 From Ulf Andersson in Tarnsjo, Sweden, for Mail Online

Thugs hurling stones, cars set on fire and refugee children aged five escorted to school by POLICE: Inside the once tranquil Swedish village at war with migrants housed in emergency centre

A tranquil Swedish village is being torn apart by bitter tensions after the arrival of 20 refugee families, MailOnline can reveal.

Tärnsjö, 150km north of Stockholm, has become a hotbed of resentment where migrant children as young as five need a police escort to get to school.

Residents and newcomers have exchanged insults, thrown rocks and set fire to cars, leaving many on both sides scared to leave the safety of their homes. 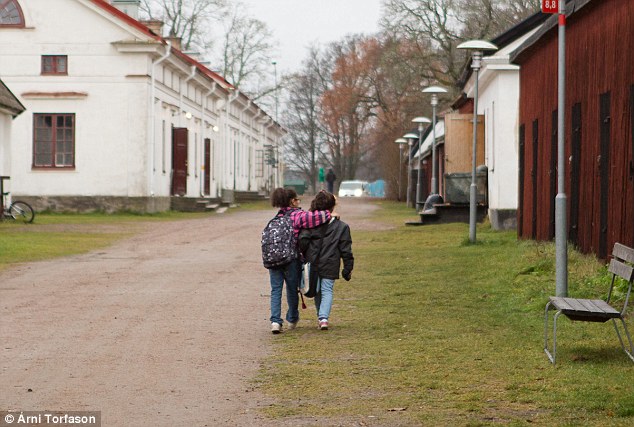 Terrified: Children like these have been caught up in tensions between locals and migrants in Tärnsjö, where stones have been thrown and cars set alight – as well as insults hurled at children on their way to school 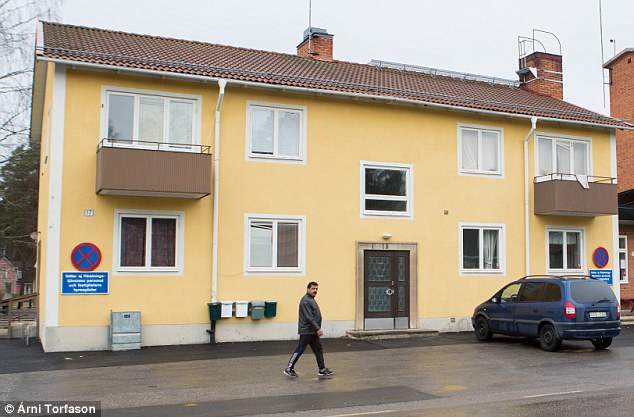 Migrant centre: Tension has risen in Tärnsjö, 150km north of Stockholm, since migrants moved into this block of flats next door to the firestation

Young migrant children living there have had abuse shouted at them and spat at on their journey to school.

But events in Tärnsjö are no longer exceptional in Sweden, which has always prided itself on welcoming refugees with open arms.

In the last few months, with 10,000 asylum seekers arriving a week, the country has reintroduced border controls and the anti-immigrant Sweden Democrats has become the second largest party in Sweden, opinion polls show.

Instead Tärnsjö, a relatively small village with a population of 1,200, is a snapshot of those places where bubbling anger has spilled over into violence and arson.

Racial tension has divided the village into two groups; those who support the immigrants and those who want them gone.
Far-right councillor Michael Ohman

Protesters have set fire to 17 immigration centres in the past two months – and the authorities have warned it is only a matter of time before someone is killed in the race-hate arson attacks engulfing this once-peaceful nation.

The problem in Tärnsjö, far-right local councillor Michael Ohman told MailOnline, comes down to the fact many of the villagers never wanted the migrants to move in.

‘Racial tension has divided the village into two groups; those who support the immigrants and those who want them gone,’ he explained.

‘There has been fighting between immigrants and the people living here.

‘The village integration works badly because people don’t want immigrants in the village. This is no longer a happy community, it’s divided and is not a pleasant place to live.’

The councillor continued: ‘We have the highest tax rate in the county because we are paying for so many immigrants. 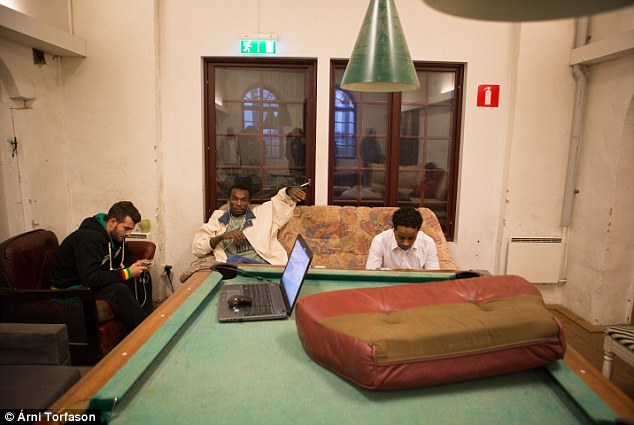 Battle: The problems in Tärnsjö started when migrants, many of them living in this centre, began throwing stones at cars as they passed. Locals retaliated, and threw stones back 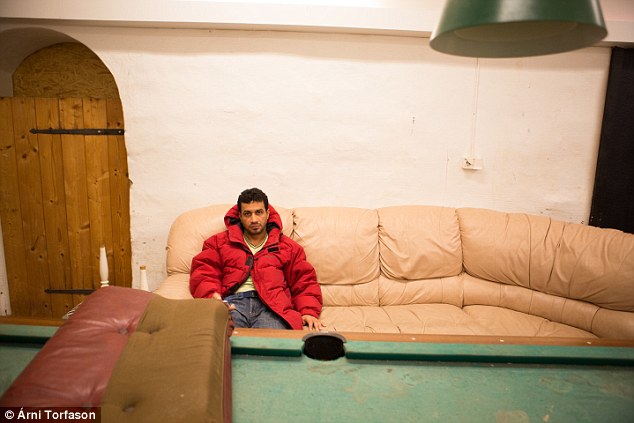 Escalation: But then a window at the centre, which is sparsely furnished, was smashed. The next day a refugee family’s car was burned. After that, the children were escorted to school by the police 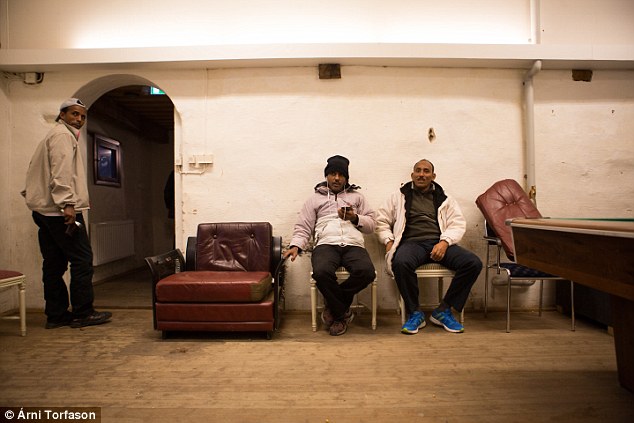 Problem solving: Tärnsjö is not the only village where migrants have been housed. It is becoming more common as accommodation in the city becomes scarce, due to the sheer numbers arriving 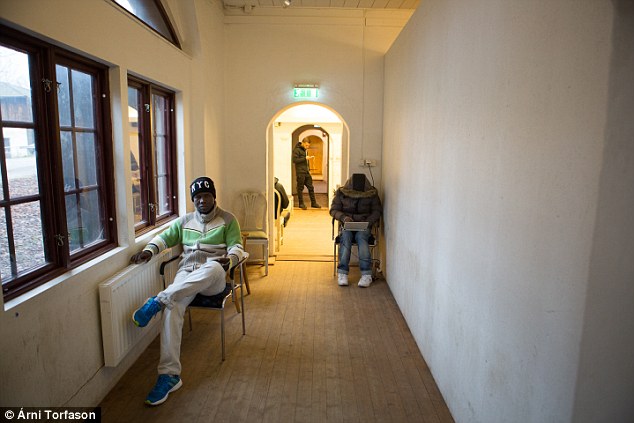 Remote: Some don’t like living so far out; one asylum seeker described Tärnsjö as ‘boring’. Another bus of refugees refused to get off when taken to one isolated village, demanding to be taken elsewhere 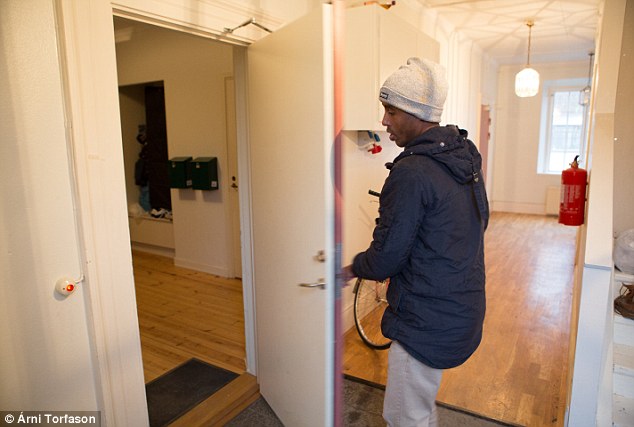 Fury: The feeling in some cases is mutual. We didn’t want them here, Michael Ohman, one of Tärnsjö far-right councillors, told MailOnline, it is ruining our village. It is no longer a happy place to live 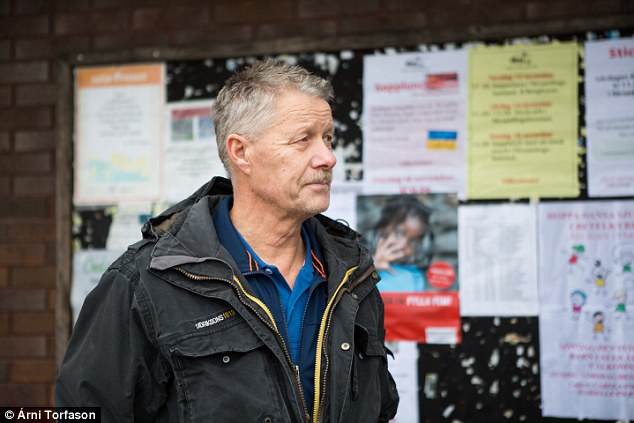 Disappointed: Andreas Pettersson, the local migration officer, had hoped the village would accept the new arrivals, but is now faced with dealing with increasing hostilities between the two sides

‘Everyone who comes gets an allowance of 200 Kroner (£20) a week and free housing, and who pays for that? Us, taxpayers.’

Anders Petterson, a migrant liaison officer, admits many were ‘outraged’ when they began to arrive.

He hoped people he knew in the area would help them to integrate and never anticipated one day police would be called to escort migrants’ children to school as locals hurled abuse at them.

Things have disintegrated to such an extent that children aged just five sometimes run the gauntlet of hate and intimidation and sometimes arrive at Tärnsjö Skola too terrified and upset to speak.

Even teachers there are too frightened to walk with them – worried they too will become targets of hate.

Tärnsjö Skola Principal Nina Lundén told MailOnline: ‘Children said they were frightened, that they did not feel safe when they were going from their home to the school.

‘We then did everything we could to help them and arranged for them to be escorted in order to keep them safe.’

The problems are said to have begun in September when migrants started throwing stones at locals’ cars, and residents retaliated by throwing them back.

The fires were further stoked on social media – and eventually locals, thought to be teenagers, began organising ‘events’ where a gang would gather to throw stones at the block of flats which has been turned into a makeshift migrant centre.

Mr Petterson said: ‘This went on for about two weeks at a low scale, almost every day. It escalated windows at the centre were smashed.

‘This scared the migrants. They had come from Syria – from a war zone – to this.’

The following day a car belonging to a refugee family was set on fire.

Teachers aren’t the only ones in the village worried of rising tension, and what it might mean for their own safety.

Rasmus Leng lives just metres from the migrant block, and has witnessed much of the problem first-hand.

‘The neighbours living in the apartment nearby have caused all kinds of devilry,’ he told MailOnline, pointing to marks on his car, where someone had shot an air gun at it.

‘I’ve heard a lot of noise and disturbance among them. I don’t like them.

‘They have been throwing stones and they scream a lot during the night.

‘And then with the attacks from racists upon that? It does not feel safe here, especially with my wife being pregnant.’ 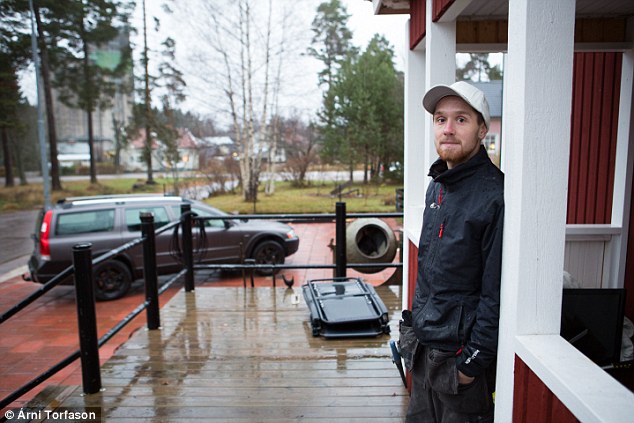 Scared: Rasmus Leng, who lives just a few metres from the refugee centre, has witnessed some of the worst of the behaviour for himself. He complains of noise, and says his car has been damaged by an air gun 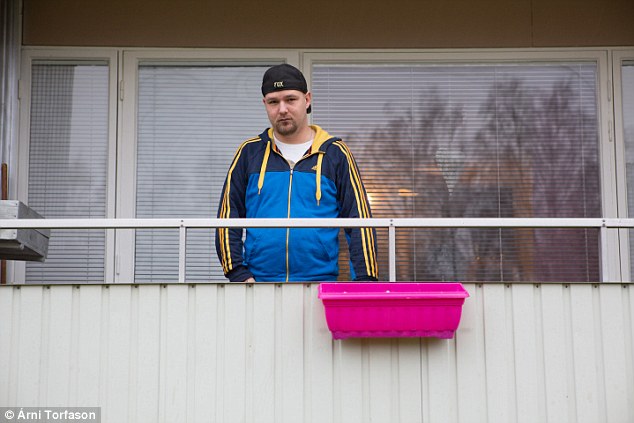 Crime: Tobias Willhäll accuses the new arrivals of stealing bicycles and breaking into storage facilities. But he says it is all down to just one family that has caused ‘all these troubles’ 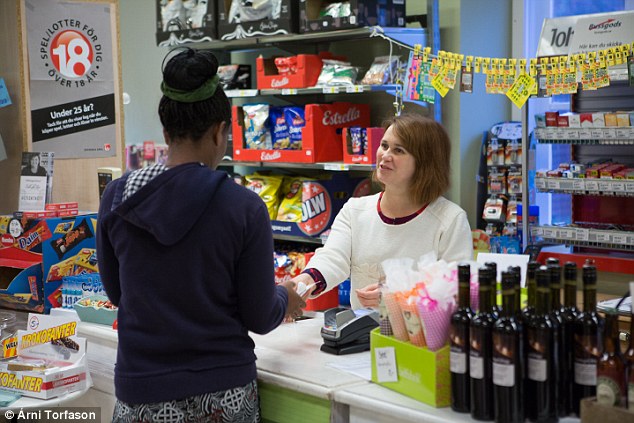 Fearful: Other villagers (not pictured) told MailOnline how they feared the rising tensions could end with something similar to the attack on migrant pupils in the town of Trollhättan, which left two students dead

Tobias Willhall added: ‘The immigrants have caused all kinds of trouble for us. I have friends whose storage spaces have been burgled by immigrants and bicycles have been stolen.

‘It is particularly one family. It is the one which has caused all these troubles.

‘There is a really bad tension in the village because of the refugees.’

Others were nervous about how much further the violence might go.

They fear they are on the brink of a similar incident to the one where Anton Lundin Pettersson, 21, walked into a school in Trollhättan in north of Gothenburg, wearing a helmet, a Star Wars mask and used a sword to kill two migrant students.

Back in Tärnsjö, Lillemor, a hairdresser in her mid-fifties who didn’t want to give her surname, said: ‘I’m concerned about the situation in the village.

The refugees are just as scared. Tamam, who is living in the apartments with his wife Rabaa, son Hamza, 13, and daughter Batoul, 12, is the refugee whose car was torched.

‘We don’t feel afraid when we’re at home and all we want is peace and quiet.’ 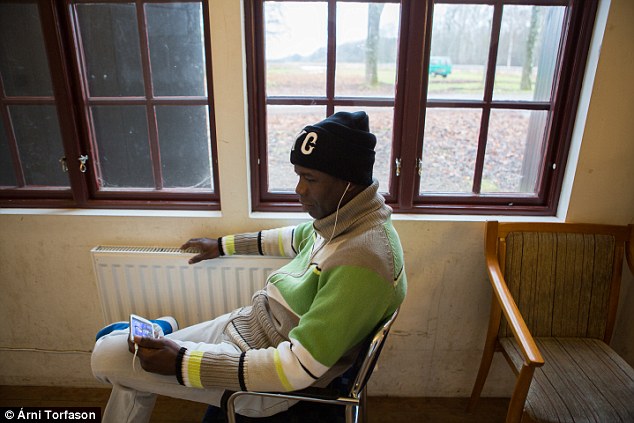 The feeling is mutual. Father-of-two Tamam, not pictured, said most of the residents were nice, there was some who seemed to ‘really hate’ him and his family, as well as the other refugees 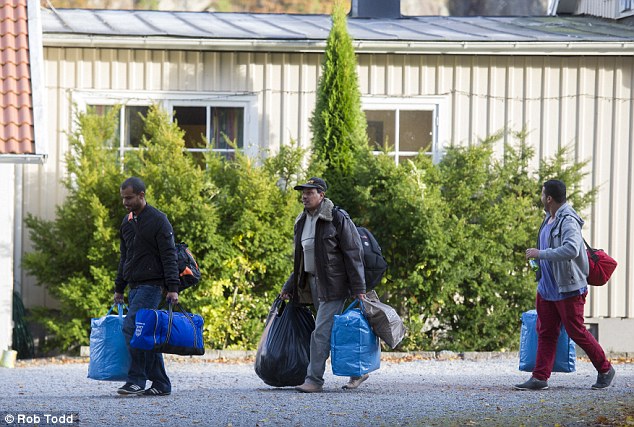 Taxes: Anger comes from the benefits given to the migrants. Councillor Mochael Ohman said: ‘Everyone who comes gets an allowance of 200 Kroner (£20) a week and free housing, and who pays for that? Us, taxpayers’