Sweden has committed cultural suicide, possibly economic and national suicide. And they did it willingly, believing in the better nature of all human beings. Is there any surprise that they are shocked by the results of their bleeding heart, open-door immigration policy? No. Most third-graders could have told them how this would turn out.

Long the liberal/progressive model country of the world, Sweden opened its arms wide to Muslim immigrants, as many as wanted to go there. Never mind that they had no way to support themselves. Sweden offers generous welfare benefits to those unable to fend for themselves.

Never mind that the Muslim “refugees” refused to assimilate and become proper Swedes, clinging to the culture they ran away from. The Muslims have isolated themselves in segregated communities, now known to the local police as “no-go zones,” where Sharia law is the order of the day, not Swedish law.

Never mind that Muslim men consider a smile an invitation to gang rape. Sweden is now #2 on the world list of per capita rape. Only the African cesspool of Lesotho has a higher per capita rape rate. And nearly all of Sweden’s reported rapes have been committed by Muslim “refugees.”

Norway, Sweden’s neighbor to the west and north, has been watching the Swedish bleeding heart, progressive experiment very closely, and has declared Sweden dead.

To protect their own country, Norwegian leaders have sworn to lock down their Swedish border when the expected collapse of Sweden occurs, admitting no migrants from Sweden.

According to Norway’s Prime Minister Erna Solberg, “We are prepared for the worst.” When the imminent collapse of Sweden occurs Norway plans to close its Swedish border by force. Refugees from Sweden will be rejected without the benefit of asylum.

Photo, below: Grateful Muslims, who live on the generous welfare offered by their Swedish hosts, burn the Swedish flag in public. Note the sign in the background – “TAKE SOME LESSONS FROM 9/11!!!” Common scum! 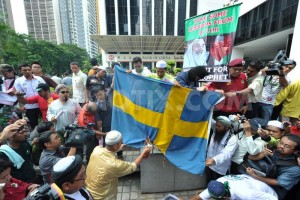 Long before refugees from Syria started trickling into Europe, and long before Germany went on a moral crusade to let every third worlder into their country, there was Sweden. Most European countries had started shifting into multi-cultural societies decades ago, but Sweden was arguably the first country to really open the floodgates. While there are otherEuropean nations with a higher percentage of foreign-born citizens and residents, Swedenwas the first to let in so many people from countries with radically different cultures than their own.

As a result, the social fabric of their society is beginning to tear. The police are overwhelmed, their welfare system is overburdened, and their borders are crumbling. All in all, their society is on the verge of collapse. Depending on your perspective of Europe’s migrant crisis, you may find that hard to believe. But if you don’t believe me, then take a look at what the Norwegian government has been saying.

Norway is ready to abandon the Geneva Convention if Sweden collapses. The border will be closed by force, and Swedish refugees will be rejected without the possibility to seek asylum. “We are prepared for the worst,” says Prime Minister Erna Solberg.

There is such an imminent danger that the Schengen agreement, and the asylum system in Sweden will break down, that Norway must have an emergency legislation in place in case it happens, believes Norway’s Prime Minister Erna Solberg. Therefore, she has crafted a law that will allow for Norwegian authorities to reject asylum seekers who do not come directly from a conflict area…

…”It is a force majeure proposal which we will have in the event that it all breaks down, that the flow (of refugees) just comes, and they all end up in Norway, because we are at the top of Europe. Norway is the end point, is not it,” says Erna Solberg in an interview withBerlingske.

Let that sink in for a moment. The neighbor to one of the most affluent, stable, and successful nations on the planet (or at least it was those things) is afraid that Sweden is on the verge of collapse. They’re worried that Sweden’s problems are so severe, that they’re going to spill over their border and wreck their country as well.

It used to be that when you thought about countries that could collapse, Northern Europe was off the table. Civil wars, genocide, refugees, revolutions, coups, all that stuff. Those sorts of things used to be unheard of in the West. If you brought them up in a conversation, you’d immediately think of Africa, South America, or the Middle East. I mean, social collapse in a Nordic country? Ridiculous! That’s for third world countries, not highly developed welfare states.

But it is happening, and there’s a very simple reason why. Nations in the West became so rich and so advanced that they rose above the poverty, chaos, and insecurity of the third world. But then they started importing people from the third world, and they failed to assimilate them. Now they have third world problems.