Texas elector who says he can’t in good conscience vote for Trump paid to join cheating site Ashley Madison, while unemployed and bankrupt with a wife and three kids

H/T Donna Topian Rosenbloom
Chris Suprun, the Texas elector who claims he cannot in good conscience cast his vote for Donald Trump apparently has no conscience at all. Not only does Suprun have no conscience, he is also morally bankrupt.

In 2012 Suprun paid to join the cheating website Ashley Madison, a site that arranges adulterous hookups. At the time, Suprun was financially bankrupt with a wife and three young children.

Adding to the steaming pile of soulless misery that is Chris Suprun is his association with Megaphone Strategies, a PR firm dedicated to social justice, which coincidentally, I’m sure, was founded and is operated by Democrat/Obama/Clinton operative Van Jones.

The picture is pretty clear. The Democrats were looking for a broke, immoral elector with no conscience, and they found just the right guy, and exploited him for their own corrupt and evil purpose, to subvert the will of the people. 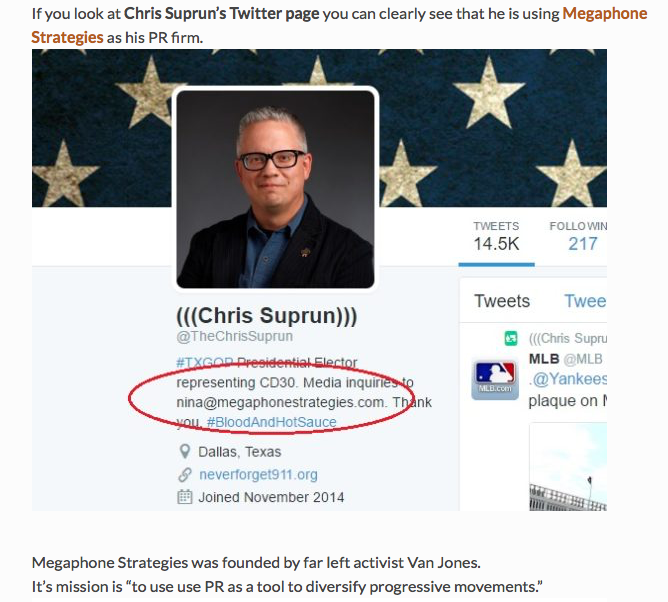 As reported by gotnews.com, anti-Trump Texas faithless elector Stephen Christopher “Chris” Suprun, who wrote a widely-shared op-ed in The New York Times about his decision, joined and paid for cheating website Ashley Madison in 2012, using the same address registered to his 9/11 charity, while bankrupt, likely unemployed, and married with three young kids, after he and his working wife owed over $200,000 to multiple creditors — and that’s just the start of it.

GotNews’ research into Suprun’s bizarre and unexplained flip-flop against President-elect Donald J. Trump turned up Ashley Madison data, damning bankruptcy records, and a series of P.O. boxes and what appears to be an association with a payday loan scam site.

Since turning against the decision of the people of Texas to elect Trump, Suprun also became a client of a “social justice media strategy” PR firm run by left-wing CNN commentator Van Jones.

What is going on here?

There’s a lot to go through today, folks, but it’s good. So bear with us and keep reading:

Even though he used a throw-away e-mail address and changed his birth date by a few days, the Ashley Madison credit card data is unmistakably Suprun:

It’s also the same P.O. box used for Suprun’s “Never Forget 9/11” charity, which he still lists on his Twitter profile:

According to the data, Suprun joined Ashley Madison in February 2012, just six months after joint-filing for bankruptcy with his wife, Dianne Michelle Suprun, in September 2011, and paid for an “affair guarantee” in September 2012.

An “affair guarantee”, which costs $249 today, is a discounted “package” for “credits” that allow men to chat with potential cheating partners on the website. Suprun, who had three kids under the age of 10 at the time, listed himself on the site as “attached male seeking female.”

And it gets even fishier:

That website appears to be a payday loan scam site that became defunct sometime between March 2016 and today, according to Archive.org. Take a look:

Searching WhoIs history of the website and any related websites always ends in a dead end — the owner of the site used domain privacy services to conceal their identity. The addresses buried in the site’s privacy policy and terms of use? P.O. boxes in Chicago or Miami. Phone numbers are toll free, or use a Los Angeles, California area code.

Could this really be Stephen “Chris” Suprun’s website and, presumably, source of income? Or did Suprun use the site at one point because of his unemployment and bankruptcy? Is he a victim of a payday loan scam site? But why would someone who owns websites like “neverforget911.org” and “consurgo.org” ever list a payday loan site they used as their own website?

Nexis is a leading provider for information like this relevant to credit reports, particularly for businesses and banks, allows people to dispute information about them, and is prohibited by law from providing false information. How likely is it that someone like Suprun, who was unemployed for an extended period of time and went bankrupt, is not familiar with this?

We can’t conclude anything from the Nexis listing, but taken together with Suprun’s bankruptcy, unemployment, fishy charities, and 6 P.O. boxes, it certainly raise a lot more questions.

And why would a supposedly conservative Republican like Stephen “Chris” Suprun use a far-left non-profit “social justice” PR firm run by Van Jones? Our investigation here may provide the answer: Suprun could still be totally broke and this is the only firm that will represent him.

In fact, between the well-heeled PR firm, the Democratic elite’s unhinged response to President-elect Donald J. Trump’s resounding victory on November 8, and Suprun’s sudden change of heart about Trump, it even raises the question of whether or not Suprun is receiving money, favors, or other kinds of benefits in exchange for his anti-Trump cooperation!

Do the people of Texas want to be disenfranchised from their presidential vote by an elector with a history of financial troubles who is being represented by his supposed political enemies? Probably not, which explains why nearly 30,000 people have signed a petition to recall Chris Suprun as an elector, as you can see here.

Chris Suprun grandstands in The New York Times about his experience on 9/11, his “debt” to his children, and how he is an “elector of conscience.”

He doesn’t mention that he paid money to cheat on his working wife, while bankrupt and deep in debt with his 3 kids, using the same P.O. box that he used for his 9/11 charity — one of many P.O. boxes registered at one point to him in public records databases, along with what appears to be a fishy payday loan scam site.