It is hereby decreed: Strike “thug” from your racist vocabulary. While you are at it, remove the black crayon from your Crayola box, you racist bastard!

Don’t you just love it when raging racists call everyone else racists? Me, neither!

In a lively exchange of mutual honky-bashing, MSNBC host Alex Wagner, liberal poster weenie, Ari Berman, and Salon contributor, Brittney Cooper, discussed, with much nodding, agreement, and reciprocal back-slapping, how the word “thug” has become a contemporary euphemism for the word so unspeakable we refer to it in polite company as the “N” word.

I had no idea that you had to be black to be a thug! Who knew? I have seen many white thugs, and waste no time in referring to them as such. The word “thug” actually originated in India….

1. a cruel or vicious ruffian, robber, or murderer.

2. (sometimes initial capital letter) one of a former group of professionalrobbers and murderers in India who strangled their victims.

Now that the “T” word has joined the “N” word in the vocabulary of the prohibited, I wonder how much longer it will be before “W” replaces “watermelon.” I can see the supermarket sales flyers now (below).

Scroll down for video…. 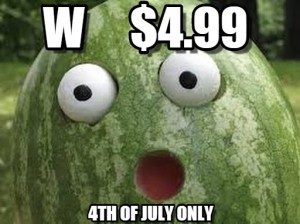