One of my favorite philosopher/commentators, Thomas Sowell, lays down some basic truth 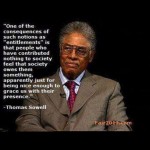 Goddard College’s recent decision to have its students addressed from prison by a convicted cop killer is just one of many unbelievably irresponsible self-indulgences by “educators” in our schools and colleges.

Such “educators” teach minorities born with an incredibly valuable windfall gain — American citizenship — that they are victims who have a grievance against people today who have done nothing to them, because of what other people did in other times. If those individuals who feel aggrieved could sell their American citizenship to eager buyers from around the world and leave, everybody would probably be better off. Those who leave would get not only a substantial sum of money — probably $100,000 or more — they would also get a valuable dose of reality elsewhere.

Nothing is easier than to prove that America, or any other society of human beings, is far from being the perfect gem that any of us can conjure up in our imagination. But, when you look around the world today or look back through history, you can get a very painfully sobering sense of what a challenge it can be in the real world to maintain even common decency among human beings.

If you prefer to get your education in the comfort of a library, rather than in person amid the horrors, you might study the history of the sadistic massacres of the Armenians in the Ottoman Empire or the heart-wrenching story of Stalin’s man-made 1930s famine in the Soviet Union that killed as many millions of people as Hitler’s Holocaust did in the 1940s.

Mao’s man-made famine in China killed more people than the Soviet famine and the Nazi Holocaust combined. And we should not deny their rightful place in history’s chamber of horrors to the 1970s Cambodian dehumanization and slaughters that killed off at least a quarter of the entire population of that country.

What about slavery? Slavery certainly has its place among the horrors of humanity. But our “educators” today, along with the media, present a highly edited segment of the history of slavery. Those who have been through our schools and colleges, or who have seen our movies or television miniseries, may well come away thinking that slavery means white people enslaving black people. But slavery was a worldwide curse for thousands of years, as far back as recorded history goes.

Over all that expanse of time and space, it is very unlikely that most slaves, or most slave owners, were either black or white. Slavery was common among the vast populations in Asia. Slavery was also common among the Polynesians, and the indigenous peoples of the Western Hemisphere enslaved other indigenous peoples before anyone on this side of the Atlantic had ever seen a European.

What does all this mean?

In addition to the chilling picture that it paints of human nature, it means that Americans today — all Americans — are among the luckiest people who have ever inhabited this planet. Most Americans living in officially defined poverty today have such things as central air-conditioning, cable television, a microwave oven and a motor vehicle.
A scholar who spent years studying Latin America said that what is defined as poverty in the United States today is upper middle class in Mexico.

Do we still need to do better? Yes! Human beings all over the world are not even close to running out of room for improvement.

There is so much knowledge and skills that need to be transmitted to the young that turning schools and colleges into indoctrination centers is a major and reckless disservice to them and to American society, which is vulnerable as all human societies have always been, especially those that are decent.