Wow! Multiple allegations that Charlie Sheen raped a young male co-star on a movie set, plus plea from the boy’s best friend to stop Hollywood pedophilia

I had reached a point where it was hard for me to be shocked by anything that happens in Hollywood, but I must admit, this one shook me. The height of disgust and depravity.

This is only one of the reasons that real people consider Hollywood, filled with its plastic creatures, nothing more than one large cesspool.

Charlie Sheen is being accused of sodomizing a then 13-year-old Corey Haim on the set of the movie ‘Lucas,’ according to Daily Mail.

According to the National Enquirer, a now deceased Haim had told others about how he was allegedly raped as a minor by Sheen, who was 19 at the time, while filming the 1986 movie.

Former actor Dominick Brascia claims Haim disclosed to him what happened between him and Sheen. Brascia went on the record about what he says Haim told him before he died in 2010 at 38-years-old.

Meanwhile on Wednesday, Sheen emerged from his parents Martin and Janet Sheen’s home looking defiant while smoking a cigarette in the face of the bombshell allegations against him. 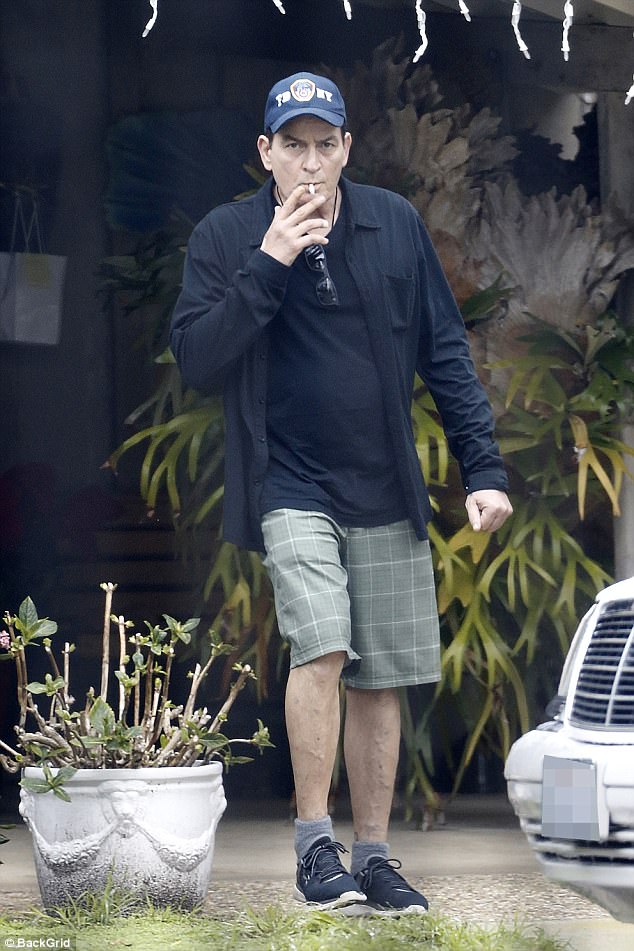 Hours after the allegations of raping a young Corey Haim were made public, Sheen emerged Wednesday from his parents’ house defiantley smoking a cigarette 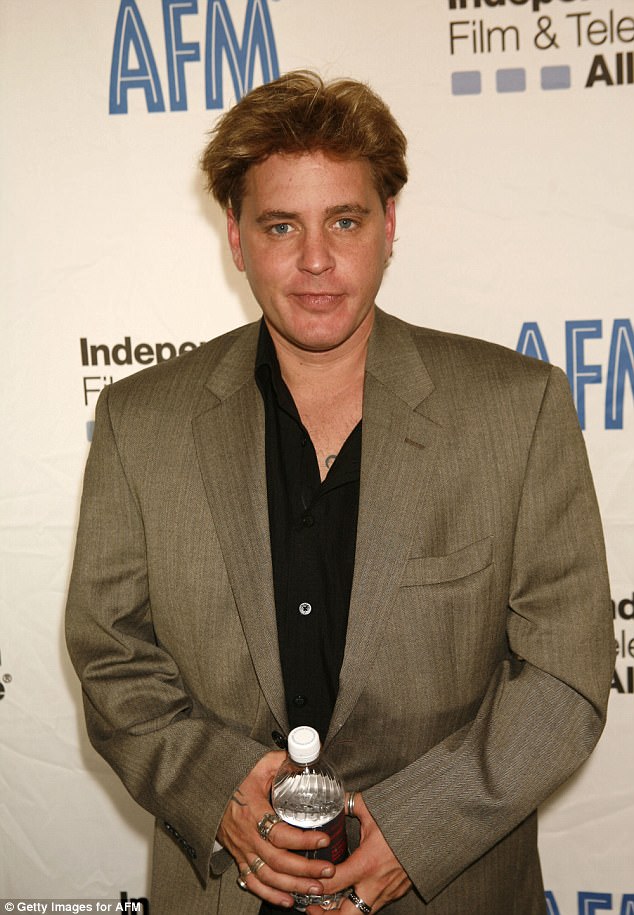 A now deceased Corey Haim (left) told others about how he was 13-years-old when he allegedly had sex with Charlie Sheen, who was 19, during the filming of ‘Lucas’ 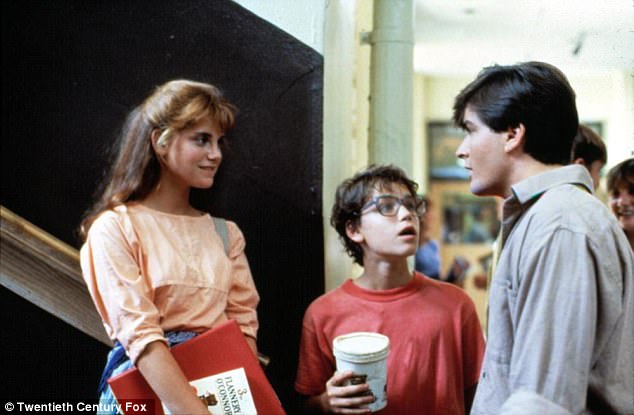 Left to right: Kerri Green, Corey Haim, Charlie Sheen, from the 1986 film ‘Lucas.’ Sheen is accused of raping a then 13-year-old Haim during filming while Sheen was 19 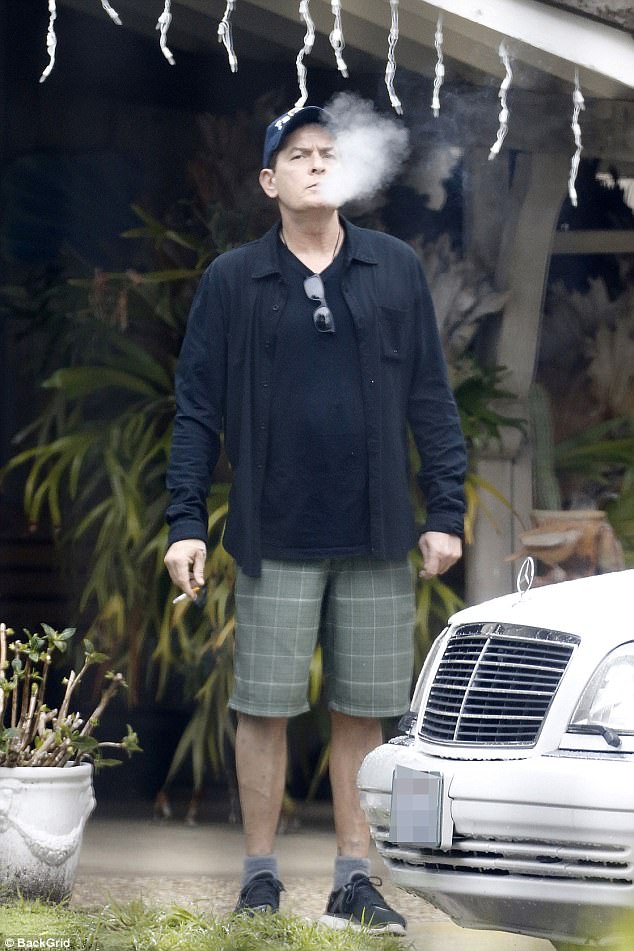 Smoking away his trouble: Sheen puffed away on a cigarette in front of his parents’ home Wednesday- hours after bombshell accusations were made against the actor that he raped fellow star Corey Haim when Haim was 13-years-old

The magazine also says that Lost Boys actor’s closest friend, Corey Feldman, alluded to the alleged incident in his book ‘Coreyography: A Memoir.’

‘At some point during the filming [of ‘Lucas,’ Haim] explained an adult male convinced him it was perfectly normal for older men and younger boys in the business to have sexual relations, that it was ”what all guys do,” Feldman wrote.

‘So they walked off to a secluded area between two trailers during a lunch break for the cast and crew,’ continued Feldman,’ and Haim, innocent and ambitious as he was, allowed himself to be sodomized.’ Feldman never named Sheen as the man in the incident.

In 2011, according to the Enquirer, when Feldman was asked about Sheen he said: ‘I’m not a huge fan of Charlie Sheen…especially the way he’s affected other people that I know.’ Tellingly, Feldman also said Haim ‘fought for his entire life to recover from those early experiences and to get his life together.’

And, just last week, on the Today Show, Feldman said a report coming from the National Enquirer was to be expected. 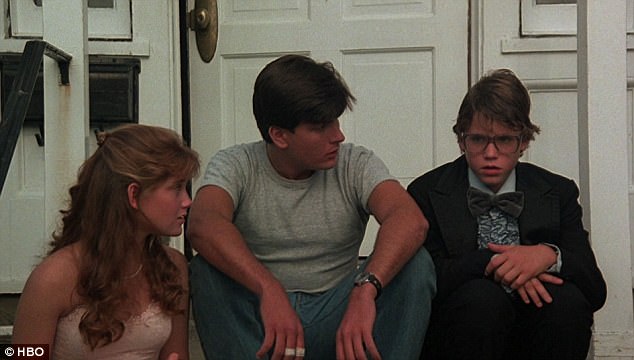 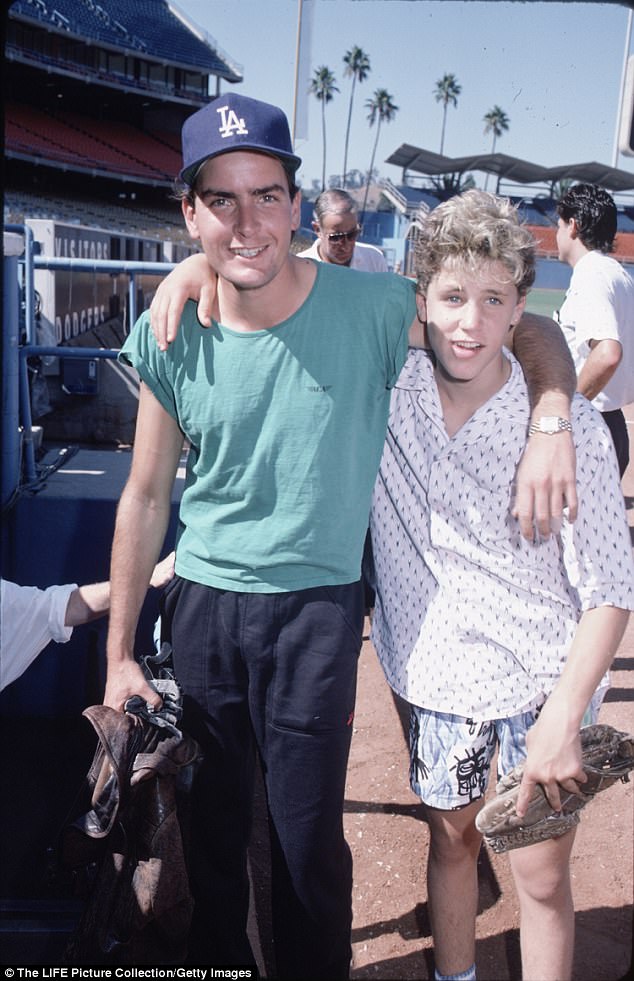 Sheen and Haim circa 1990. Sheen is being accused of raping a 13-year-old Haim while filming ‘Lucas’ in Chicago approximately four years before this photo was taken

‘They cover it up. They protect it. I know of a friend of mine that actually went and spoke to a reporter and gave all the information and they were — the day before I launched my campaign, they were supposed to put out a story in the [National] Enquirer.’

‘I believe there’s a lot of darkness in Hollywood right now, and I believe it’s been there for quite some time,’ said Feldman. ‘It’s going to continue unraveling. This is just the beginning, it’s just the tip of the iceberg.’ 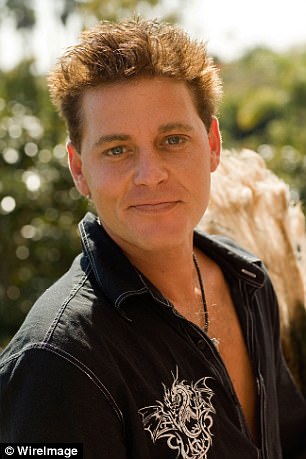 Other sources came forward to support the claims made by Brascia about Haim’s interaction on set with Sheen- who is now living with HIV.

Another insider alleges that ‘Corey was so confused by the sexual encounter he believed, like so many victims, he was ‘in love’ with his abuser,’ adding that the actor bullied the young teen actor into a vulnerable position for sex.

Brascia added that Haim told him he later had consensual sex with the ‘Wall Street’ star while in his mid-to-late 20s. ‘Haim told me he had sex with Sheen again,’ Brascia said, adding ‘He claimed he didn’t like it and was finally over Sheen. He said Charlie was a loser.’

According to the report, the Enquirer says they spoke with dozens of sources who say Haim told them about his alleged abuse at Sheen’s hands before he died of pneumonia in 2010.

Additionally, a confidant close to Sheen claims that the ‘Platoon’ actor had said he had a liaison with Haim, but said it was consensual.

Other allegations in the report emerged about Sheen’s behavior with at least one other minor on the set of ‘Lucas,’ in which the report says a total of eight set witnesses spoke out as part of the investigation.

One of the women on the set claims she was just 17 when Sheen inappropriately kissed her and solicited sex from her in a bathroom: ‘I [admit], I did have a thing for Sheen,’ said the now 49-year-old woman, who revealed the incident happened at Chicago’s Navy Pier.

‘I talked with him for a long time,’ she said, ‘and kissed him.’ However, the woman alleges, Sheen pressed for more than a kiss.

‘I was in a bathroom with him at one point. He tried to get me to have sex.’ She also claimed that Sheen had become increasingly ‘sloppy and wasted’ as the evening progressed.

Another woman who was on set claimed that she had just turned 18-years-old in time for the cast wrap party.

‘He found out about [my birthday] and he grabbed me and gave me this elaborate kiss,’ she said, adding Sheen had a mouthful of steak at the moment he landed a ‘disgusting,’ slimy, saliva-smooch on her lips: ‘To this day I can remember that. Is that sad?’ 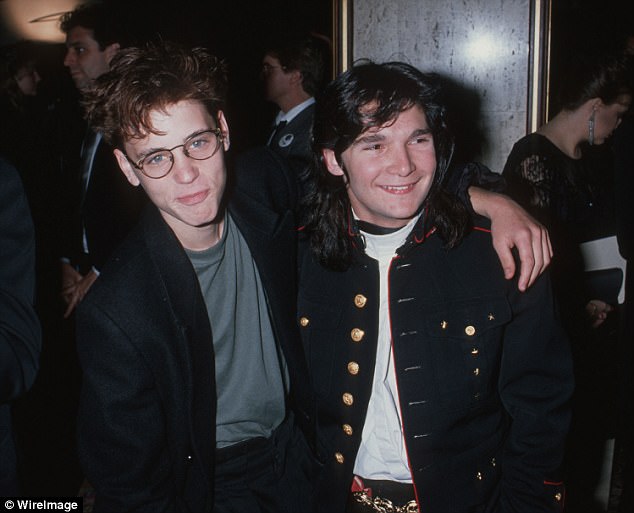 Best friends: Haim with Corey Feldman (file). In Feldman’s memoir Coreyography (2013) he alleged that Haim was sodomized during the filming of ‘Lucas’ but never named Sheen 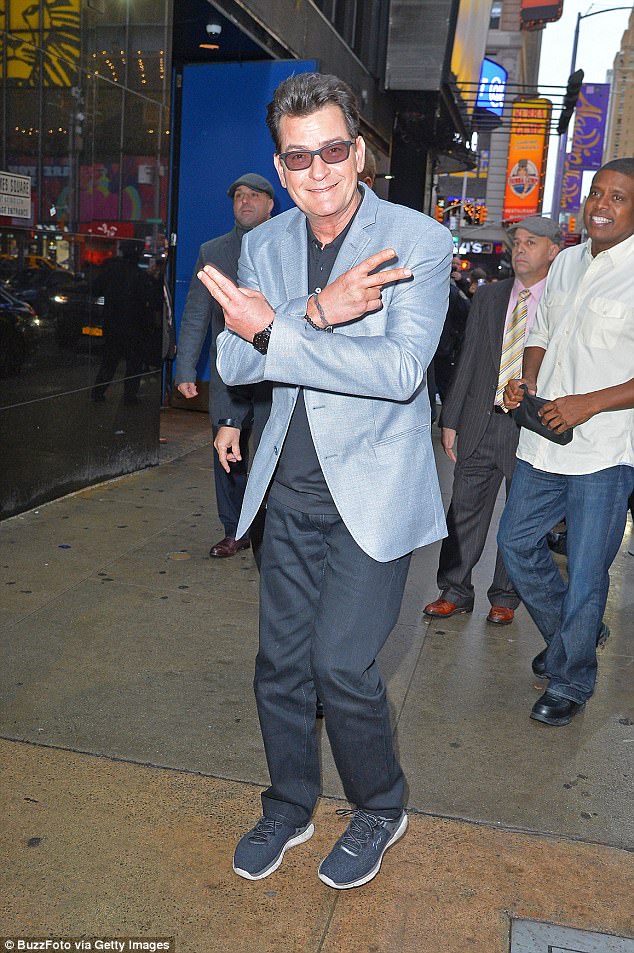 Troubled star. Sheen opened up in 2015 about being diagnosed with HIV in 2011 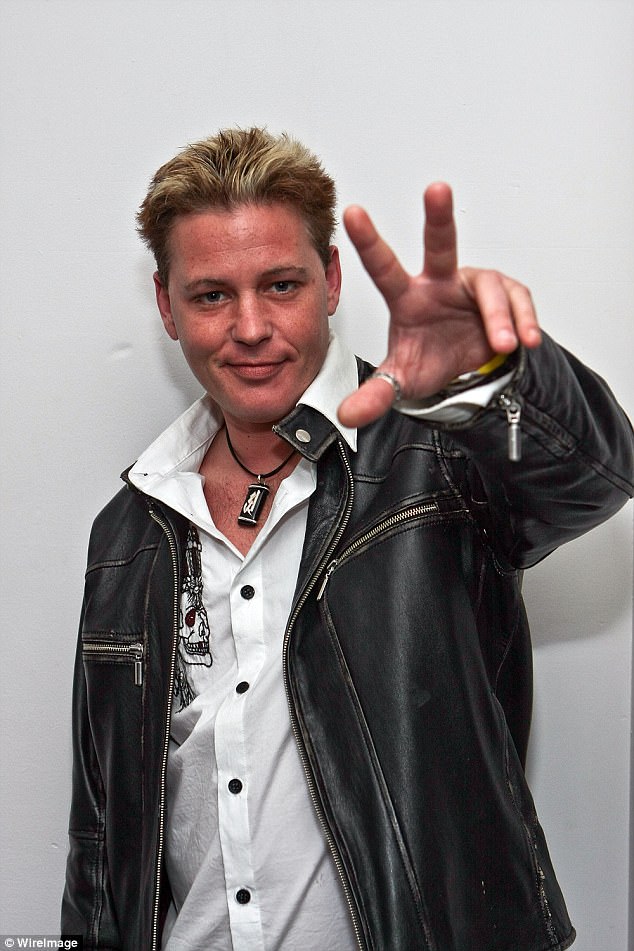 Tragic ending: After battling drug addiction for years, Haim died of pneumonia in 2010 at the Oakwoods apartments in Los Angeles

The just barely 18-year-old says she shut down Sheen after the kiss.

‘I had no interest in doing anything with him, so I let him know that,’ she told the Enquirer. ‘I didn’t think he was all that special actually, like some of the girls in my class did. I actually thought he was a conceited a–hole. He was really obnoxious on the set.’

Richards’ hand signed declaration was filed to stop Sheen from getting overnight visits with their daughters.

The actress alleged he ‘belonged’ to ‘disturbing’ sites ‘which promoted very young girls, who looked underage to me with pigtails, braces and no pubic hair performing oral sex with each other.’

Brascia also claims in the report that he had witnessed Haim approach Sheen one night, while the actor was sitting at a table with two A-list stars.

He said Sheen was drunk when Haim walked over and asked, ‘Hey Charlie, remember me? How you doing, Charlie?’ In reply, Sheen coldly claimed he didn’t know Haim, and that Sheen said: ‘Who are you? I don’t know who you are.’ 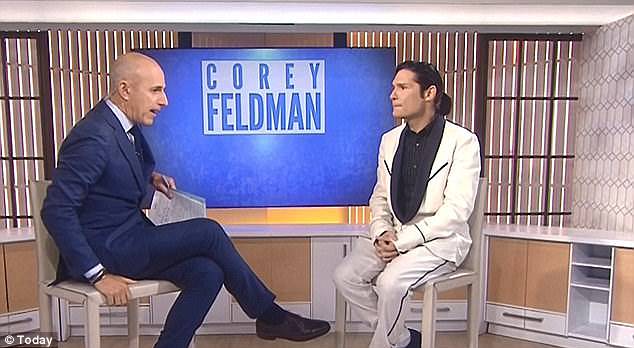 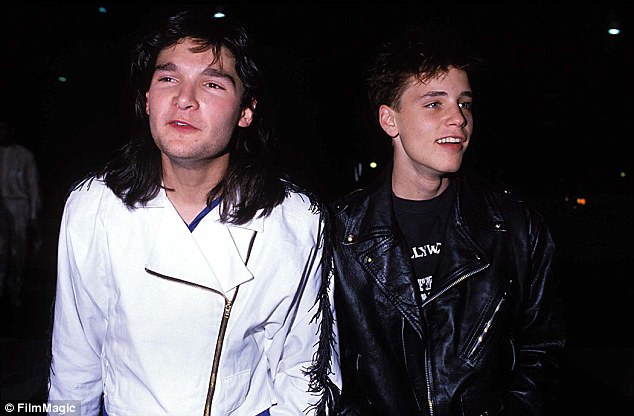 His best friend couldn’t save him. Feldman wrote in his memoir about alleged abuse Haim suffered during the filming of ‘Lucas,’ saying he explained to Haim that the behavior he experienced was not appropriate

He also says later in the evening, Brascia found himself face-to-face with Sheen who told him: ‘I’m really not that drunk. I just don’t like that little a–hole. I hate that a–hole. Get him out of here. He’s a freaking jerk.’

Sheen also allegedly shoved Haim’s mother Judy, after interacting with her in a favored Los Angeles spot saying: ‘I hate your f—–g son. If I ever see him, I’m going to flush his head down the f—–g toilet. Get the f–k away from me,’ before pushing her away and into a wall.

An insider said the mere mention of Haim’s name to Sheen and the actor would ‘shut down on me completely. There’s no doubt in my mind that something went down…enough that he had a grudge against Haim forever.’

DailyMail.com reached out to Sheen’s team and have not heard back.

The statute of limitations for the alleged incidents on the set of ‘Lucas’ which was filmed in Chicago, have long expired.

Sheen’s lawyers told the Enquirer he never had sex with Haim, and they did not respond in time about other allegations from the set of ‘Lucas.’