As Rep. Steve Scalise celebrates passage of the tax reform bill, liberal morons respond by wishing his would-be murderer had been a better shot

It is very frustrating and I find it difficult to remain calm when I read responses like those below to Representative Steve Scalise’s tweet praising the tax bill on its way to the White House for President Trump’s signature.

You don’t have to be a brilliant economist to see the necessity for this tax cut, frankly, and most importantly, the corporate tax cut, which will balloon the economy and GDP while shrinking unemployment even further. I believe the only slowdown in what will most certainly be a runaway economy is the availability of skilled workers to fill positions.

I honestly expect to see a growth in GDP to possibly $25 trillion by 2020.

However, the usual suspects on the left are unable to wrap around their pathetic heads around the concept of tax cuts = growth in tax revenue. JFK did it, Reagan did it. It isn’t rocket science. Study a little history, liberals!

The most shocking and repugnant replies, however, coming from the ever-tolerant and loving liberal weenies to Steve Scalise, are those wishing Scalise’s would-be murderer had been a better shot.

Today, the @HouseGOP will send the Tax Cuts and Jobs Act to @POTUS' desk. There's no reason for Democrats to vote against tax cuts for middle class families. pic.twitter.com/bLS7nVqMkQ

How loving and tolerant, these liberal weenies….

Too bad that the “baseball diamond” shooter’s aim was so bad. You are a VILE traitor. #dontmissnexttime 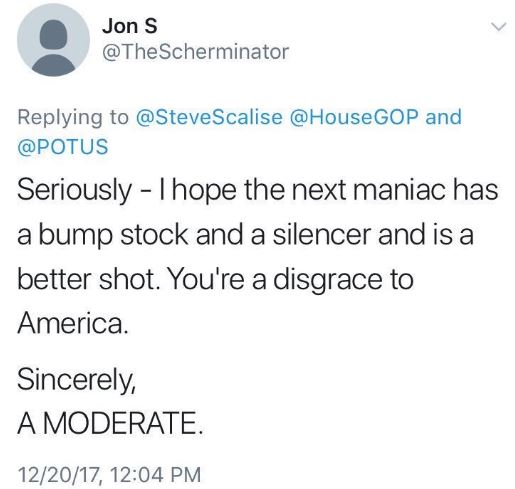 For those criticizing this bill, you are so wrong. I know it is counterintuitive that less taxes = more tax revenue, so just look at history. JFK and Reagan both cut taxes and the net effect was a gain in tax revenue. Read a little, will ya, instead of listening to the lying MSM.