His most royal hiney of Saudi Arabia, Prince Alwaleed bin Talal, has pledged his $32 billion fortune to the spread of Islam in the West

Fresh off a hearty lunch at an Italian restaurant, where he and his posse “liberated” the tablecloths as a prank, and are proudly wearing them around town as hats, Saudi Prince Alwaleed bin Talal, the 34th richest man in the world, has pledged his $32 billion to charity.

Commendable, yes? Hold that thought. What passes for charity to the pampered prince are organizations whose primary purpose is to spread Islam and Shariah law throughout America and the western world.

I’m sure that his royal hiney’s intentions are honorable. However, donating huge sums o’ jack to organizations which condone, even support the beheading of Christians and Jews is a wee bit counter to the western cultural understanding of “charity.”

No doubt American liberals can be bought. They would sell their mothers into slavery for the price of a pizza. Thus, the prince’s plan should work splendidly.

My hope is that western philanthropists will push back against this Islamofascism, exceeding the prince’s generous gift, contributing to causes that promote peace, prosperity, and individual liberty. Perhaps they should donate bazillions to the spread of Christianity and Judaism in the Middle East, especially Saudi Arabia. Yeah, that’s the ticket! 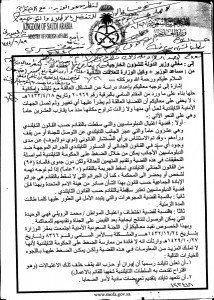 The prince’s letter, pledging his fortune to the spread of Islam in the West. H/T Pamela Geller

Islamofascism: Saudi Prince Alwaleed bin Talal, a senior member of the Saudi monarchy, says he’ll pledge his $32 billion fortune to charity. In light of his past donations, this is a highly concerning development.

Alwaleed says he will model his endowment on the Bill and Melinda Gates Foundation, only with a twist: Much of his philanthropic work will help “foster cultural understanding” of Islam in America and the West.

That means promoting the kingdom’s brand of Islam, while censoring criticism of Islam.

Published reports and books reveal Alwaleed already has pledged millions to radical Muslim Brotherhood front groups that have a secret plan to Islamize America and spread Shariah law throughout the West. These pro-jihad groups can now count on a massive and virtually endless infusion of cash to their war chests.

Alwaleed has extensive ties to Brotherhood leaders. For example, he tapped “tele-Islamist” Tariq Al-Suwaidan, widely reported to be a leader of the Muslim Brotherhood in Kuwait, as the channel director of his Islamic religious TV outlet Al Risala.

Alwaleed made headlines after 9/11 when he donated $10 million to the World Trade Center fund only to have then-New York mayor Rudy Giuliani return the check. After presenting the money, the Saudi billionaire issued a press statement blaming the terrorist attacks on U.S. support for Israel while “our Palestinian brethren continue to be slaughtered at the hands of the Israelis.”

The next year, Alwaleed donated a whopping $27 million to a Saudi telethon for the violent Palestinian intifada against Israel, according to the Clarion Project.

Also in 2002, he gave $500,000 to the Washington-based Council on American-Islamic Relations, which federal authorities have linked to the Muslim Brotherhood and Hamas.

Despite fawning press reports, Alwaleed’s charitable pledge is no cause for celebration. It’s cause for alarm. His billions will finance Islamist pressure groups who exist to force Western civilization to yield to Islamic no-go zones, Shariah courts and blasphemy laws.

If unmatched by patriotic philanthropists, the Saudi prince’s huge endowment could be a major setback for state and local efforts to push back against Islamization.