Photo, above: Released by the Israeli military, shows the scene of the July 21, 2017 terror attack in a family home in the settlement of Halamish (IDF Spokesperson)

Will the Israeli/Palestinian conflict ever end? How will it end? I would be very interested in the opinions of Powdered Wig readers. Please leave your comments in the comments section, below.

The family had gathered for a Friday night Shabbat dinner to celebrate the birth that morning of a grandchild.

The Shabbat table was covered with a bright white tablecloth, laden with snacks, bottles of cola and an unopened bottle of whiskey.

They were waiting for other guests to arrive, the door of their home at the settlement of Halamish apparently open.

Instead, a 19-year old Palestinian, Omar al-Abed, from a nearby village, burst in armed with a large knife and began stabbing the members of the family. There were apparently 10 people in the house when he entered, according to The Times Of Israel.

He killed the grandfather of the family, Yosef Salomon, 70, his daughter Chaya Salomon, 46, and son Elad Salomon, 36.

Yosef Salomon, 70, his daughter Chaya Salomon, 46, seen at a recent family celebration. They were stabbed to death on July 21, 2017 in a terrorist attack at Halamish (courtesy)

His wife Tova, 68, was seriously wounded and taken to the Shaare Zedek Medical Center in Jerusalem where she underwent surgery on Saturday morning. When she came out, she was given the bitter news — her husband and two of their children were dead.

Elad Salomon, 36, who was stabbed to death in a terror attack in Halamish on July 21, 2017, in an undated picture. (courtesy)

The couple are survived by three other children; it was the youngest who wife had given birth to the new grandchild that morning.

As Abed continued to stab the victims, the slain son’s wife managed to rush several small children to a nearby room and lock the door. She called the police and screamed for help.

The scene of a deadly terrorist attack in the West Bank settlement of Halamish on July 21, 2017. (IDF Spokesperson)

A neighbor, who serves in an elite IDF unit, heard the cries and rushed over, shooting the terrorist through the window of the house.

Identified only as Sgt. A., from the IDF’s elite canine special forces unit, the soldier said he heard the screams of the victims, ran to the window of the house and shot and wounded the killer.

“I understood immediately what was happening — I saw the terrorist and shot him through the window,” he said, according to Channel 2 news.

“I understood the situation thoroughly,” he repeated. “I shot into [the house] from outside. I didn’t think a lot. I acted immediately.”

The terrorist was wounded by the shooting. Some reports said that as medics tried to save the victims, he jumped up and tried to attack them, before being subdued again. 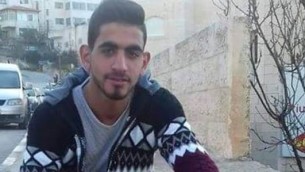 On Saturday afternoon Abed (pictured above) was released from hospital and handed over to the security services for questioning.

Photographs released by the army showed the extent of the savage attack. Blood covered the entire floor of the living room and kitchen, staining one corner of the Shabbat tablecloth. Bloody footsteps led up the stairs and stained the walls. A couch and blanket were covered in blood.

Cartoon of the Day: Welcome to the Club
May 9th, 2021 Conservative Firing Line