Guess who this is. Guess what his son did in Orlando a few days ago. Guess whose office he is seen visiting in this pic.

I really have to wonder about this.

The father of the Orlando mass murderer has been a frequent visitor to Washington. He has had several meetings with Hitlery Clinton’s State Department.

Seddique Mateen, pictured below, is also a candidate for President of Afghanistan. Hmmmm.

Is it not plausible that Seddique encouraged his son’s evil act to drum up overwhelming support amongst the very anti-American Afghan electorate in an effort to win the presidential election? Just sayin’. 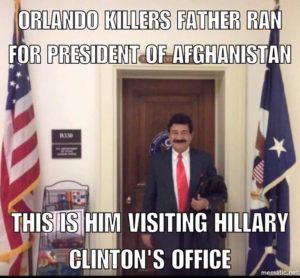 This is a little disturbing.  Remember Amed Mohamed and the exploited islamic opportunism with 14-year-old “clock boy” bomb hoax from Irving Texas and how his father was running for political office in Sudan?

Well, apparently 29-year-old terrorist Omar Mateen (below left) comes from a similarly engaged political family and his father, Seddique Mateen (below right), was/is running for national office in Afghanistan and not happy with the government of Pakistan.

Mr. Seddique Mateen the political candidate is also a prolific user of social media and has reams of U-Tube footage broadcasting his political ideology.

In most of his social media postings Mr. Seddique Mateen takes the position that they Pakistan Government is to blame for most of the problems with Islamic Extremism, in Pakistan and Afghanistan.  Jihadi Dad promotes the side of the Taliban in pictures and dozens of messages directed to President Obama.

In addition, Got News.Com has discovered the sister of Omar Mateen, Miriam Seddique, purchased Omar’s house for $10 in April via a “quit claim deed”.  –link–

It would appear the jihadist Omar Mateen was making preparations for this attack for quite some time.

Donald Trump was correct again when he called for additional scrutiny in December of 2015.   The families of these terrorists need to be a concentrated focus for attention.