Reince Priebus, aka Pasty McDoughboy, and the RNC, are circulating a loyalty pledge among the field of GOP presidential hopefuls, asking them to pledge their loyalty to whichever candidate wins the nomination. Obviously, since all the candidates except Trump pledged their support by show of hands during the first debate, this move is clearly aimed at Donald Trump.

So, just what does the RNC have up its sleeve? Are they trying to force Trump to agree to a pledge that he has already refused? What will they do when he doesn’t sign, ban him from future debates? I wonder if they are prepared for the grass roots revolt that will ensue from such a stupid maneuver?

What will The Donald do? Will he simply refuse to sign the pledge? Will he alter the language to suit himself, then sign and return it? What will Trump do if he is banned from future debates? Go third party?

Trump spokeswoman Hope Hicks confirmed the meeting to CNN. Trump also announced that he will have a 2 p.m. news conference at Trump Towers Thursday.

The Republican National Committee had quietly circulated a loyalty pledge to the Republican presidential candidates, requesting they affirm their allegiance to the party. 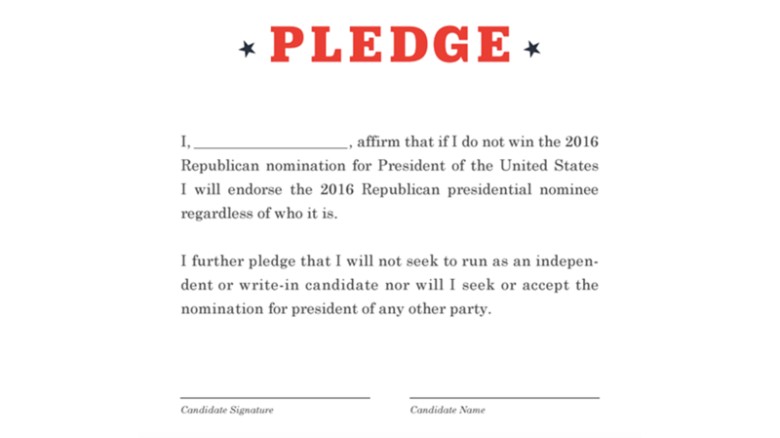 How stupid can Priebus and the numbskulls at the RNC be? They have a clear front runner who is adored by the Republican base and killing it in the polls. All they have to do is get behind him and enjoy the ride to the White House. What is the problem with that? I guess it makes too much sense. They would rather insure a third consecutive hosing from the Democrats in 2016, which will be the end of the Republican Party.

The geniuses at the RNC should be kissing Trump’s ring and throwing money into assuring his election. Instead they are looking for ways to neutralize him. Getting him to sign a loyalty pledge will certainly do that. With his pledge they can then deny him the nomination, regardless of how high he is polling, without the fear that he will run third party and steal away a vital segment of the Republican base. At least that is what they appear to be calculating, or miscalculating, as it were. That is why The Donald is refusing to make the pledge. He needs the leverage of a third party threat to keep the RNC honest.

Donald Trump does not need the RNC as much as the RNC needs Donald Trump. He already has solid support from 1/3 of the Republican base. Should he be banned from future debates for not pledging his loyalty to Jeb Bush, I suggest Trump buy an hour of air time from one of the other networks, possibly in the same time slot as the GOP debate. That way Trump controls the event. He answers relevant questions instead of being insulted by a Barbie slut. Trump is the attraction, not the fifteen GOP statues who make up the remainder of the field. He may very well work a deal with whichever network he chooses that the network pays him millions instead of vice versa.

Maybe Trump should turn the tables on the RNC. He is good at that. He agrees to sign their pledge only if they will sign his, which reads:

“We, the Republican National Committee, do hereby pledge our full support to Donald Trump if he is leading the polls at the end of the primary, and furthermore pledge that he will be the 2016 Republican nominee for President of the United States.”

That should fry their heads!