VIDEO: The Democrat Party is dead. They just don’t know it yet. Bill O’Reilly agrees they are imploding

I don’t agree with Bill O’Reilly on a lot of issues, but we are together on this one. The Democrat Party is embarrassing itself, losing elections, and losing massive numbers of followers.

O’Reilly on the negative Democrat and CNN response to President Trump honoring slain Navy SEAL William “Ryan” Owens: Critical mass has been reached by the far left in this country, and that they are doing damage to their own legacy and to the Democratic Party at a rate I’ve never seen in my lifetime. I’ve never seen an ideology now collapse the way it has collapsed, in the last, I don’t know, six months. And this, this is like the worst, you know, because this woman was obviously so overwhelmed with emotion of love for her husband. Remember, she has three young children at home, and the President of the United States calls her to come into this speech to honor her slain husband, and you have people, hateful people, criticizing this?” 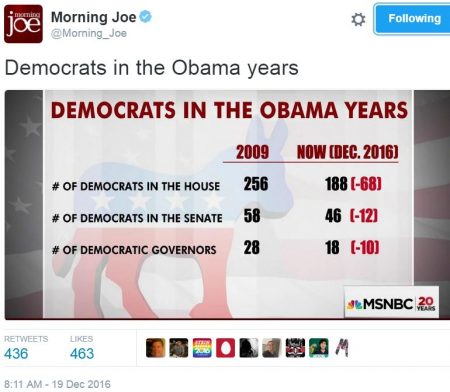