Video: Lest we should forget. Remember the Japanese attack on Pearl Harbor, 74 years ago today.

As a resident of Oahu, I drive by Pearl Harbor frequently (I live only a half hour east of Pearl Harbor). I have visited the Arizona Memorial several times. It is a somber, moving, and unforgettable experience that I would recommend to every American.

Reflecting on the attack at Pearl Harbor today is especially poignant in light of the crisis we currently face from an enemy determined to kill innocent Americans.

The vessel in the background, standing watch over her fallen sister, The USS Arizona, is the famous USS Missouri, aboard which the Japanese signed the surrender treaty in Tokyo Bay in 1945. The Mighty Mo, as we call her, is now a floating museum. 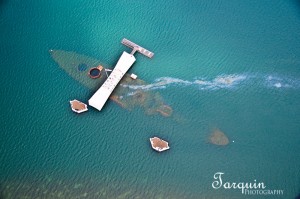 Seventy-four years after the attack the Arizona is still leaking fuel, as can been seen from the oil slick in the photo, above. According to the National Park Service, there are approximately 500,000 gallons of fuel left of the 1.5 million gallons the Arizona had on board that day. It will likely be leaking 24 hours a day for at least the next 20 years.

From wikipedia: The attack commenced at 7:48 a.m. Hawaiian Time.[14] The base was attacked by 353[15] Japanese fighter planes, bombers, and torpedo planes in two waves, launched from six aircraft carriers.[15] All eight U.S. Navy battleships were damaged, with four sunk. All but Arizona were later raised, and six were returned to service and went on to fight in the war. The Japanese also sank or damaged three cruisers, three destroyers, an anti-aircraft training ship,[nb 5] and one minelayer. 188 U.S. aircraft were destroyed; 2,403 Americans were killed and 1,178 others were wounded.[17] Important base installations such as the power station, shipyard, maintenance, and fuel and torpedo storage facilities, as well as the submarine piers and headquarters building (also home of the intelligence section) were not attacked. Japanese losses were light: 29 aircraft and five midget submarines lost, and 64 servicemen killed. One Japanese sailor, Kazuo Sakamaki, was captured.