New Rassmussen poll validates the trend. The Donald now leads the Wicked Witch of Benghazi in the most recent poll by 5%

On the heels of yesterday’s Fox News poll which showed Donald Trump defeating Hitlery Clinton in a head-to-head matchup by three percentage points, Rassmussen Reports establishes the new Trump lead as a trend.

In the most recent presidential preference poll, Rassmussen asked respondents, “If the 2016 presidential election were held today, would you vote for Republican Donald Trump or Democrat Hillary Clinton?”

According to Rassmussen’s national telephone survey, The Donald now leads Hitlery 42% to 37% amongst likely voters. 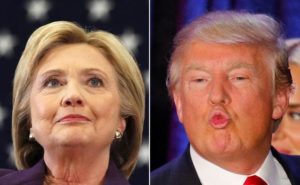 Trump earns 42% support to Clinton’s 37% when Likely U.S. Voters are asked whom they would vote for if the presidential election were held today. But Rasmussen Reports’ latest national telephone survey finds that 13% prefer some other candidate, while seven percent (7%) are undecided. (To see survey question wording, click here.)

At the beginning of this month, Trump, the presumptive Republican nominee, posted a statistically insignificant 41% to 39% lead over Clinton who is still expected to win the Democratic presidential nomination. Fifteen percent (15%) favored someone else, and five percent (5%) were undecided.

The latest findings were gathered the night before and the night after Trump’s announcement yesterday of 11 conservative judges he would consider for the current vacancy on the U.S. Supreme Court, furthering his efforts to unify the party and end the #NeverTrump movement among some Republicans. Clinton on Tuesday eked out a primary win in Kentucky but lost the Oregon primary to Bernie Sanders as the race for the Democratic presidential nomination took a more chaotic turn.

Trump now gets 76% of the Republican vote, while Clinton has 72% Democratic support. Thirteen percent (13%) of Democrats prefer Trump, while nine percent (9%) of GOP voters favor Clinton. Among voters not affiliated with either major party, Trump leads 41% to 28%, but 31% of these voters either like another candidate or are undecided.

(Want a free daily e-mail update? If it’s in the news, it’s in our polls). Rasmussen Reports updates are also available on Twitter or Facebook.

The survey of 1,000 Likely Voters was conducted on May 17-18, 2016 by Rasmussen Reports. The margin of sampling error is +/- 3 percentage points with a 95% level of confidence. Field work for all Rasmussen Reports surveys is conducted by Pulse Opinion Research, LLC. See methodology.

Rasmussen Reports has been running hypothetical matchup surveys between Clinton and Trump for several months. Here’s what we’ve found so far.

While there is much talk of a gender gap in this race, Clinton appears to have a bigger problem with men than Trump does with women. Trump leads by 22 points among men, compared to Clinton’s 11-point advantage among women.

Those under 40 favor Clinton, while older voters prefer Trump by double-digit margins.

Younger voters traditionally have been a key part of the Democratic base, but right now one-third of those voters like some other candidate or are undecided. Many of these voters are likely to be Sanders supporters which highlights how important it will be for Clinton to quickly heal her party after she wins the nomination.

Clinton is well ahead of Trump among black voters but loses the white vote to her GOP opponent. Other minority voters are closely divided.

Just last week, 92% of Democrats said Clinton is still their party’s likely nominee, with 62% who view her nomination as Very Likely.

Voters see Trump as a stronger military leader than Clinton, but most think they’ll be less safe no matter which of them wins in November.

Voters remain lukewarm about Obama’s national security policies and expect more of the same if Clinton moves back into the White House next January. Trump, if elected, will definitely change things, voters say, but not necessarily for the best.