If I could speak to Pope Francis and his trusted adviser, Jeffrey Sachs, the first question I would ask them is if they are students of history. I can only presume they are not, as they appear clueless to the lessons of the Soviet Union, Communist China, Cuba, North Korea, and other poverty-stricken experiments in Marxist collectivism.

They are apparently completely unaware of how the American experiment changed the world for the better forever (I hope). How can they possibly not understand the connection between individual liberty and collective prosperity? We have seen up close and personal in the Marxist experiments listed above what happens when you destroy the individual’s incentive to produce – mass misery and mass poverty.

Using the now widely rejected stupidity of global warming, the Pope and his trusted adviser appear to be on a mission to use “climate change/global warming” as a means to steal the wealth of America and other affluent countries and distribute it around the world.

Instead of advocating the theft of individual wealth the Pope should be preaching getting the government boot off the neck of the individual, which liberates the human spirit, creates industry, jobs, and prosperity. The Pope is plenty old enough to have seen this phenomenon of “individual liberty equals prosperity” take place in China, turning it from a third-world rice exporter to what is now the world’s largest economy. It isn’t rocket science, your Popeness. Open your holy eyes and look around! (Read more below) 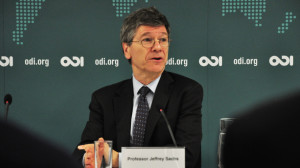 The plan is quite simple. And it should scare you. See article, below….

Top Vatican adviser Jeffrey Sachs says that when Pope Francis visits the United States in September, he will directly challenge the “American idea” of God-given rights embodied in the Declaration of Independence.

Sachs, a special advisor to the United Nations and director of the Earth Institute at Columbia University, is a media superstar who can always be counted on to pontificate endlessly on such topics as income inequality and global health. This time, writing in a Catholic publication, he may have gone off his rocker, revealing the real global game plan.

The United States, Sachs writes in the Jesuit publication, America, is “a society in thrall” to the idea of unalienable rights to life, liberty, and the pursuit of happiness. But the “urgent core of Francis’ message” will be to challenge this “American idea” by “proclaiming that the path to happiness lies not solely or mainly through the defense of rights but through the exercise of virtues, most notably justice and charity.”

In these extraordinary comments, which constitute a frontal assault on the American idea of freedom and national sovereignty, Sachs has made it clear that he hopes to enlist the Vatican in a global campaign to increase the power of global or foreign-dominated organizations and movements.

Sachs takes aim at the phrase, which comes from America’s founding document, the United States Declaration of Independence, that “We hold these truths to be self-evident, that all men are created equal, that they are endowed by their Creator with certain unalienable Rights, that among these are Life, Liberty and the pursuit of Happiness.”

These rights sound good, Sachs writes, but they’re not enough to guarantee the outcome the global elites have devised for us. Global government, he suggests, must make us live our lives according to international standards of development.

“In the United States,” Sachs writes, “we learn that the route to happiness lies in the rights of the individual. By throwing off the yoke of King George III, by unleashing the individual pursuit of happiness, early Americans believed they would achieve that happiness. Most important, they believed that they would find happiness as individuals, each endowed by the creator with individual rights.”

While he says there is some “grandeur in this idea,” such rights “are only part of the story, only one facet of our humanity.”

The Sachs view is that global organizations such as the U.N. must dictate the course of nations and individual rights must be sacrificed for the greater good. One aspect of this unfolding plan, as outlined in the Sachs book, The End of Poverty, involves extracting billions of dollars from the American people through global taxes.

“We will need, in the end, to put real resources in support of our hopes,” he wrote. “A global tax on carbon-emitting fossil fuels might be the way to begin. Even a very small tax, less than that which is needed to correct humanity’s climate-deforming overuse of fossil fuels, would finance a greatly enhanced supply of global public goods.” Sachs has estimated the price tag for the U.S. at $845 billion.

In preparation for this direct assault on our rights, the American nation-state, and our founding document, United Nations Secretary-General Ban Ki Moon told a Catholic Caritas International conference in Rome on May 12 that climate change is “the defining challenge of our time,” and that the solution lies in recognizing that “humankind is part of nature, not separate or above.”

The pope’s expected encyclical on climate change is supposed to help mobilize the governments of the world in this crusade.

But a prestigious group of scholars, churchmen, scientists, economists, and policy experts has issued a detailed rebuttal, entitled, “An Open Letter to Pope Francis on Climate Change,” pointing out that the Bible tells man to have dominion over the earth.

“Good climate policy must recognize human exceptionalism, the God-given call for human persons to ‘have dominion’ in the natural world (Genesis 1:28), and the need to protect the poor from harm, including actions that hinder their ascent out of poverty,” the letter to Pope Francis states.

Released by a group called the Cornwall Alliance, the letter urges the Vatican to consider the evidence that climate change is largely natural, that the human contribution is comparatively small and not dangerous, and that attempting to mitigate the human contribution by reducing CO2 emissions “would cause more harm than good, especially to the world’s poor.”

The Heartland Institute held a news conference on April 27 at the Hotel Columbus in Rome to warn the Vatican against embracing the globalist agenda of the climate change movement. The group is hosting the 10th International Conference on Climate Change in Washington, D.C., on June 11-12.

However, it appears as if the Vatican has been captured by the globalist forces associated with Sachs and the United Nations.

Voice of the Family, a group representing pro-life and pro-family Catholic organizations from around the world, has taken issue not only with the Vatican’s involvement with Sachs, but with Ban Ki Moon, describing the two as “noted advocates of abortion who operate at the highest levels of the United Nations.”Sachs has been described as “arguably the world’s foremost proponent of population control,” including abortion.

Voice of the Family charges that environmental issues such as climate change have become “an umbrella to cover a wide spectrum of attacks on human life and the family.”

Although Sachs likes to claim he was an adviser to Pope John Paul II, the noted anti-communist and pro-life pontiff, Sachs simply served as a member of a group of economists invited to confer with the Pontifical Council on Justice and Peace in advance of the release of a papal document.

In fact, Pope John Paul II had worked closely with the Reagan administration in opposition to communism and the global population control movement. He once complained that a U.N. conference on population issues was designed to “destroy the family” and was the “snare of the devil.”

Pope Francis, however, seems to have embraced the very movements opposed by John Paul II.

Sachs, who has emerged as a very influential Vatican adviser, recently tweeted that he was “thrilled” to be at the Vatican “discussing moral dimensions of climate change and sustainable development.” The occasion was a Vatican workshop on global warming on April 28, 2015, sponsored by the Pontifical Academy of Sciences of the Roman Catholic Church. Sachs was a featured speaker.